Today, Albums of the Year

Tomorrow, code "article-fragment" objects that can be used to create articles as well as journal entries.

These were by far the best albums released this year and the order is impeccable. If you disagree then you have no taste, even if it's purely to move Nelly Furtado into the top 10.

The Definition of Air Conditioning in a VK Commodore is

Buying an ice coffee from a service station and sticking it between your legs on the drive home.

Most of what was wrong with 2006 is over

I just played basketball and then ate a banana.

Also working on new site features which is why updates are slightly lacking.

0.87 2007-01-14
Installed Bradism Spam Destroyer (version 0.0002) that encourages spammers to register.
Now store top/bottom icons as records in options and added js/php to handle changing this
Added (more) link for articles when inserted into journal entries.
Entries which are less than 1000 characters and contain an insert article call will have their comment script insert comments for that article instead of the entry. The entries comments will also be sourced from the article it links to.
Modified the image class to use getimage.php instead of the absolute path.
Non-Phocumentary stories now display an icon (if one exists) under the article title and date.

Let me know when you find any bugs.

Schützenfest is the annual South Australian German Association sponsored German Festival. It's a celebration of all things German: Gingerbread, funny dances and most primarily Beer und Wurst. Here is how it all went. 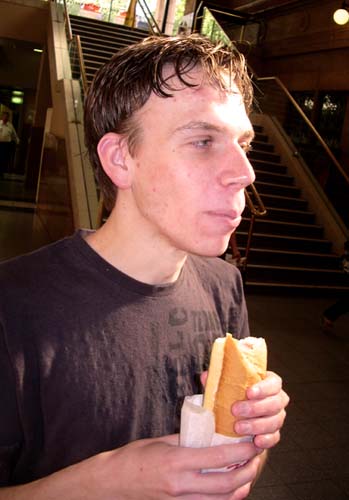 Sam, in all the excitement, prematurely buys a hot dog from the train station kiosk. 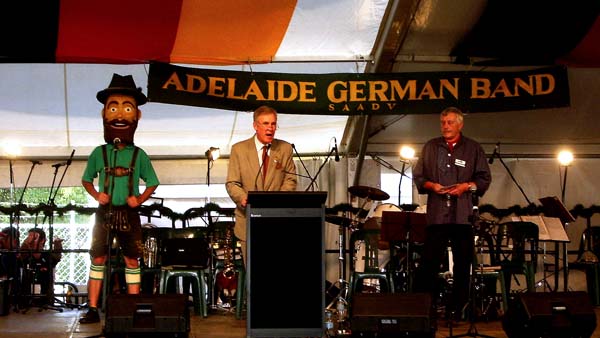 It was a festival in which Germany was apparently very serious, but also very lighthearted. I think that's best exemplified in this photo.

I woke up feeling washed this morning. It was very sunny and I was exceedingly happy. This scenario bore some strangeness as I was also exceedingly sleep deprived and it was a Monday morning. however loud music and the lure of a mid-morning Smoothicino was enough to spring me to life.

I got to work around 9am for whatever it is I do and decided that today's theme was going to be differential diagnosis. We played Differential Diagnosis on Sunday night and it was good fun and an excellent outlet for my House worship.

Alone it was boring, but with the help of Bradism No. 1 commenter Zippo aka Pharmacist Cathy as well as wrongdiagnosis.com and Wikipedia we took it in turns to present symptoms, answer questions, run tests and eventually come up with a diagnosis. Occasionaly I did some database stuff too.

The example of Differential Diagnosis on Wikipedia is wicked. It's so logical and it reminds me of how I make all my decisions.

There was an young man named Brad McInnegan
He had muscles under his skin again.
His back went out but they're growin' again
Poor old Brad McInnegan, begin again

3. Convinced a girl that because she was a girl she could only bring salad to a BBQ.
2. Picked up a lesbian
1. Got badly injured lifting weights

I'M SORRY OFFICER IS THERE A PROBLEM!?

It's been 10 days since I last had a drink. This is my first self-enforced sobriety period for the year. I haven't had a drink sice Schützenfest and I won't be drinking until Australia Day. I'm working on a theory where I should only drink on cultural holidays. Basically the end result should be me experiencing a lot more cultures.

It has been refreshing experience. Every part of my body feels alive and is screaming at me with whatever nerve impulses it has to share that were previously dulled. My stomach doesn't curdle every few mornings and my brain is sharp and agitated. It's been good to reaffirm I'm not an alcoholic and I don't require it to get by. In the days gone I've eaten BBQ without a beer; danced at Shenanigans completely sober; programmed without a glass of wine. Hell, I've even been in to work! It's great to know I don't have a problem.

I'm so sober. So very sober. My brain feels like it could handle multiple tasks at once and I'm peeing about four less times a day. This hypersensitivity to external stimuli is starting to get to me though. I've never felt so alert. When I was coming home from work tonight I got random breath tested and I blew -0.05

Amazon.com needs a breathalyser at checkout 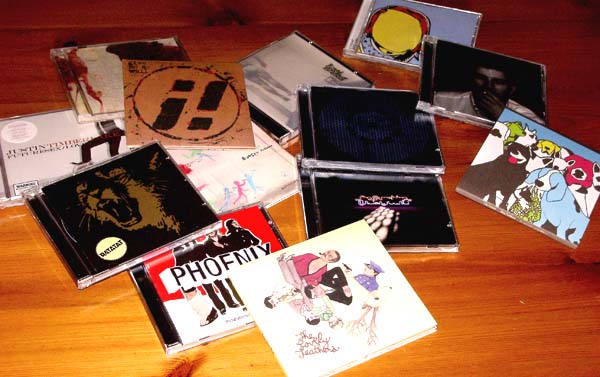 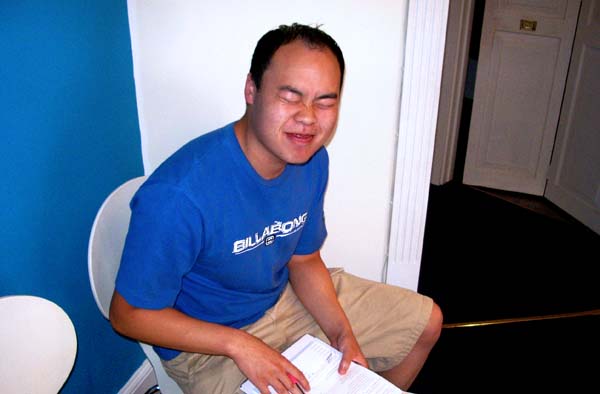 This is Chow. It's hard to believe that beneath this innocent exterior lies a back with more hair than his head. 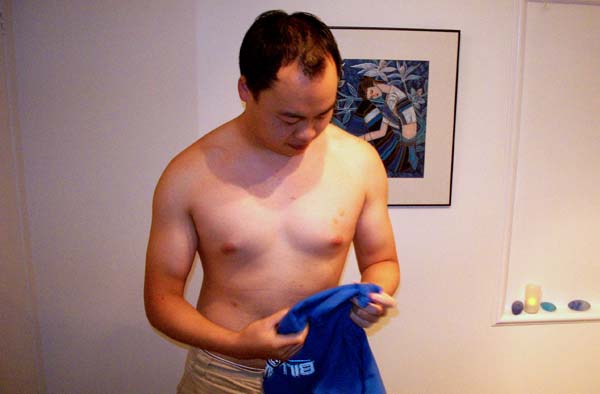 Chow prepares for his waxing with Elise. He claims the bruise on his left breast was from an errant nipple cripple.

Tomorrow is Hottest 100 day. Here's what I voted for:

And here's what I'm predicting for top 10:

10. Decent indie-rock song that, out of everything good that managed to voted for, should have come number 1
9. Shit Aussie hip-hop number that they play in pub-clubs
8. Terrible Australian rock band that is basically the reincarnation of a classic 1970's UK or US rock band
7. Catchy pop-punk rock tune with happy lyrics but almost no real musical integrity
6. Downward sliding artist that made the top 10 based on the strength of old material.
5. Some stupid gimmick song released as a B-side by Australian or US hip hop group/Norway or Scandinavian electronic group
4. Proof that more commercial fuelled teeny-boppers are listening to Triple J than ever before
3. A song that only made it this high because it was played, produced or written by Bernard fanning or he could have been in the studio on the day it was recorded or maybe he's just fucking one of their groupies
2. Way too popular Australian song that everyone will say should be number 1 even though it is essentially shit pop
1. I'm bringing Sexy Back...

Today I got to open two pieces of mail. The first was from world reknown psychic 'Marie Callas' who promised to provide the winning lottery numbers for March for the sum of only AUD $30. It's normally $250 "but as you are my friend" it's a discount rate. This seems like a pretty good deal and I will forward this letter on to Ruth, who it was addressed to despite her moving out of this house in 1989.

The second letter I got had this gem printed on the envelope: 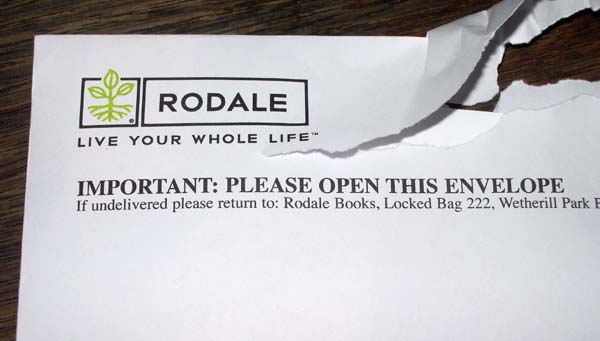 Ah, so that's the step I kept on missing..