Too Much Autumn Than I Know What to do With

I think my right forearm is the most tanned I've ever been.

To celebrate this milestone and my decreasing tolerance for the old colour scheme I knocked up a new background and logo. It's called sounds. This was in lieu of, you know, fixing the multitude of bugs in the code which are now even harder to fix after the dev box which I used mainly for watching movies exploded.

While making the colour scheme I was browsing through my Photoshop temp directory and came across a few... intriguing site themes I started and either never finished or decided not to release into production. So what better way to celebrate the 800th entry than to share a few of those designs.

The first was this rip off of WeatherZone.

You may recognise it because this theme actually did get launched into production in August 2006, a day before my hosting company's server died and they tried to fix it by formatting the back up server.... After that incident I lost a few dozen comments and had to write an awesome regular expression script to recover thousands of lines of data from Google cache. I didn't bother to recreate the Bradismzone theme though, probably for the best.

A few months after that MySpace became too popular too ignore and I decided that instead of getting a MySpace I would just make Bradism look like one. After dicking around with the logo one day I decided "Fuck it" and decided to write a whole MySpace wrapper. After almost another day of trying to code that I decided "Fuck it" and used my MySpace as a host for a couple of photos and to track how often people from High School and ex-girlfriends would check my never updating page (not very often). 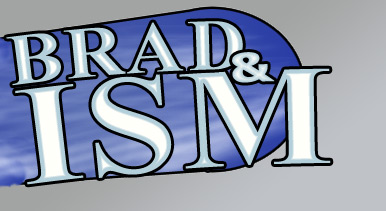 As 2006 continued I hit the Up&GO! Energise phase where I was obsessed with drinking one of them after any vague period of exercise or drinking. Yes this was a real design that I never finished. I think it's pretty obvious why. It's just half assed, and I\'d never anything half assed on this website.

Please leave your words of encouragement for Journal in the comments form below.

Maybe even meeting him. 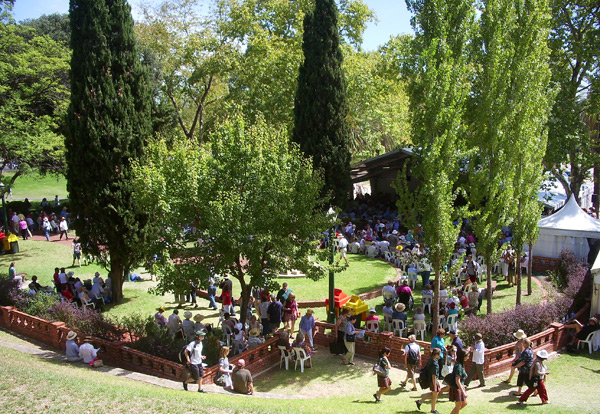 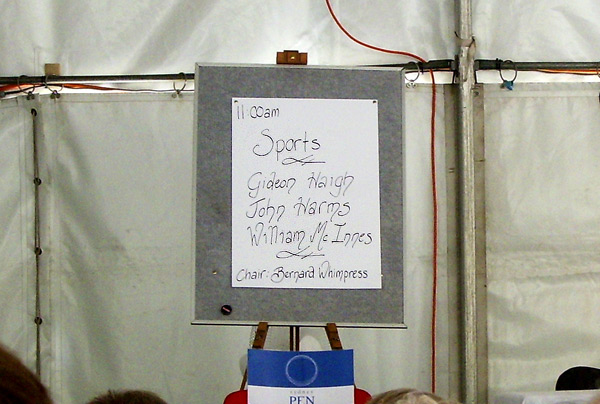 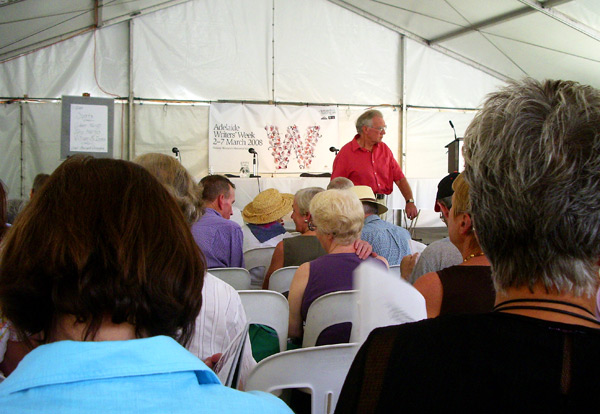 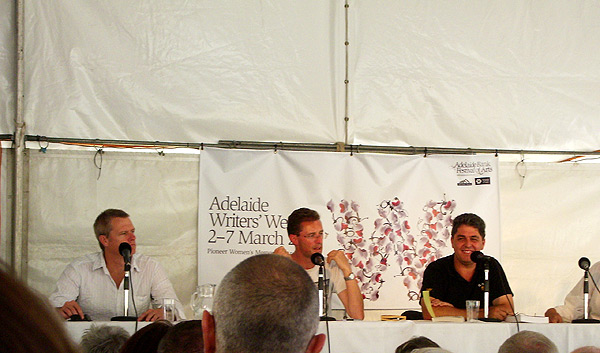 There he is. Gideon Haigh is in the middle gas-bagging on. Gideon Haigh was actually the best person on the table by far in every stake except BEING WILLIAM MCINNES. Gideon has written some columns for Cricino and handled question time the best. For those who have never been, I was surprised to learn that at writers week \"Question Time\" is actually \"Troll the Panelists Time\". 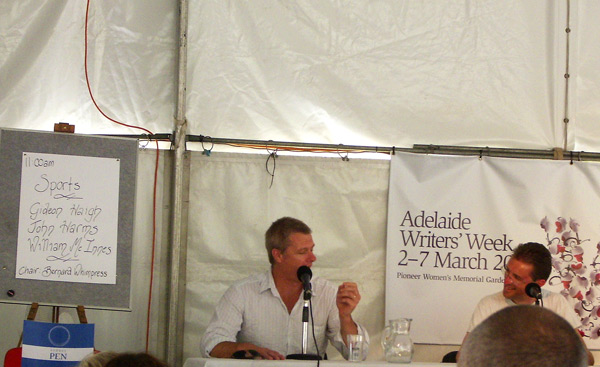 I did actually spend some time in the office today. 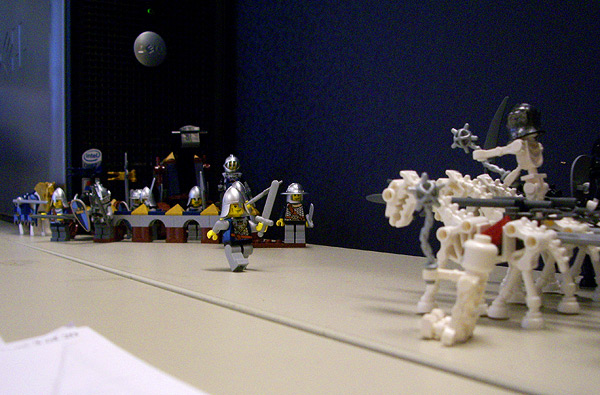 Being a man has so many awesome side quests.

I was going to post an entry titled "My Summary of the Adelaide Heatwave so that I can relive it later in life" and the body of the entry was going to say "It's really hot." Hilarious, I know, but as this sunny punishment (sunishment?) continues unabated I've discovered there's more to heatwaves than just consecutive days of heat:

- It's really hot.
- Like most sunny days, going to the beach is a regular activity but it's now too hot to play beach cricket.
- I've finally learnt how to write Fahrenheit and Celsius without having to double check my spelling.
- My recently celebrated right forearm tan is now so brown that when I'm sitting on the loo my thigh feels stereotypically uncomfortable to be around it and can only make small talk about Eddy Murphy and basketball.

I think I'm starting to adjust to this weather because it hasn't felt that bad this week. Maybe it's the tan.

One night a man had a dream. He dreamed he was walking along the beach with an Up&Go Energise. Across the sky flashed scenes from his life. For each scene he noticed two sets of footprints in the sand: one belonging to him and the other to the Up&Go Energise.

After the last scene of his life had flashed before him he looked back at the footprints in the sand. He noticed that many times along the path of his life there was only one set of footprints. He also noticed that it happened at the very lowest and saddest times of his life. This really bothered him and he questioned the Up&Go Energise about it.

"Up&Go Energise, you said that once I decided to drink you, you'd walk with me all the way. However, I noticed that during the most troublesome times of my life there was only one set of footprints. I don't understand why when I needed you most you would leave me."

The Up&Go Energise replied, "my precious, precious child, I love you and I would never leave you during your times of trial and suffering, when you see only one set of footprints it was then that I carried you."

It was almost the hottest of the heatwave days today, maxing out at 40.1°C/104.2°F. It was also the last. I drank a Monday Smoothycino and it was pretty killer, to be honest.

Walking to the Bean Bar near work I was struck by a premonition and a 13km/h Northerly fresh from the desert. I knew there was going to be a Smoothycino shortage for some reason and by God I was right. They were out of ice. So I had to walk another block to the next Bean Bar.

Back of my neck got dirty and gritty.

I'm not going to comment on the irony of my "Goodbye Summer" party that prologued Adelaide's record breaking heatwave. However if you comment you may be the first to appear on my latest feature: The 'Recent Comments' list on the sidebar.

If you have a funny remark to leave about a less than recent entry, why not post it knowing that others are now more likely to read it?

The heatwave was over. This was the view from my office window this evening. 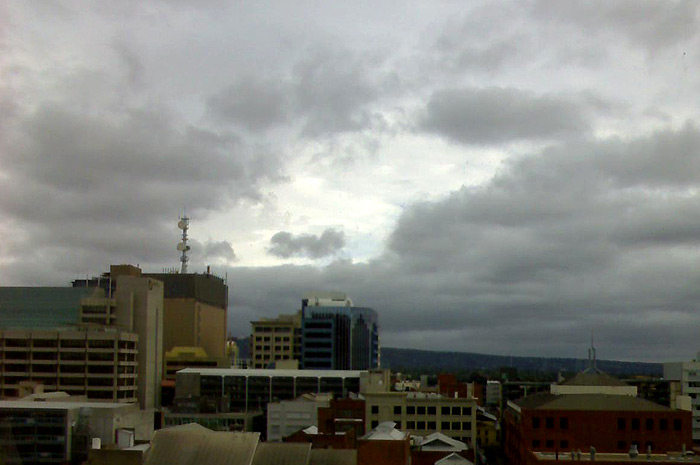 Nothing like half a month of intense sunshine to make the first instance of overcast dullery for the year so poetically captivating. After I rode the train into and over the hills (yes the hills in the background) and to my car I found myself even more poetically motivated. "Beautiful Gloom" I called it as winds buffeted my pass at the driver's seat. I drove with the windows down letting the wind in and my introspective Winter mix CD from 2005 out. It was cool. 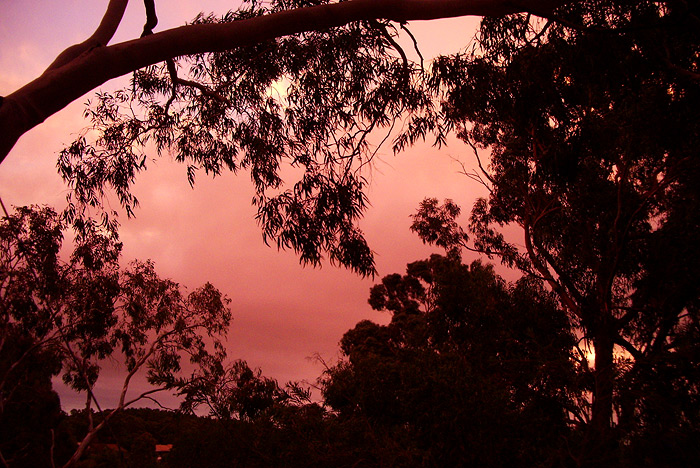 54% of the adult population (7.4 million people aged 18 years and over) are classified as overweight or obese.
17% of men and 25% of women suffer from chronic insomnia.
39.4% of surveyed men reported chronic erectile dysfunction.
More than 70% of women are unable to orgasm during sex.

I love this country.

I was driving this evening, leaving the gym in the kind of mental stupour where less essential brain functions are dimmed while my body concentrates on muscle replenishing and on drinking an Up&Go.

It's on these trips that I often find myself muttering things to the cabin about me while my inner monologue boots back up. Tonight I heard the words "I love traffic lights" come out and I paused a moment and thought... Why did I say that?

After pondering I realised one of the many super-efficient applications running on my OS is traffic light awareness software. I can seemingly calculate traffic-signal patterns with high degrees of accuracy based only on instinct and the time of day. I doubt I am the only one, but sometimes I feel like a traffic light genius when I'm ready to go the moment before the green light appears while everyone besides me clunks into action a second after it, like a drunk having his first go at Guitar Hero. Is it my idiosyncrasy or just a characteristic?

Whatever this attribute is categorised as, my brain seems to place more importance on it than it does inner monologue.

For those in the dark, Earth Hour was a government/media funded awareness stunt to promote the cause to reduce carbon emissions. To this end all people and businesses of Australia were encouraged to save energy by switching off all lights between 8pm and 9pm tonight. The promotion started in Sydney during the week with the ironic launch of a giant hot air balloon shaped like a light globe.

My opinion of Earth Hour:
On my own - boring.
After other people came to my house - entertaining.
While driving to the pub - dangerous.

I got home from the gym tonight and my mum had lit the fire. I guess that means it's winter now.

On Friday I went to Myer to buy a new hoody. Having worn my old one almost four years I wanted something different. After trying a whole bunch on I bought a very plain, dark Bonds one. It doesn't look remarkable but it's so soft and warm. It feels like someone who loves the shit out of me made it just for me.

My tradition of microwaving soup and then carrying the hot bowl with a hoody sleeve as my oven mitt also started today. 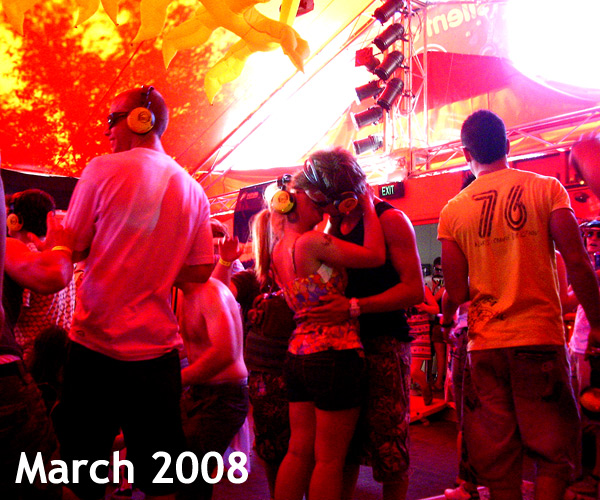 Apart from accidentally reviewing two tracks from 2007 and having to scrap them, March was another fantastic month of music releases and teasers. You can read words about it below, or just click this to listen to it yourself. Or both!

The Futureheads – The Beginning of the Twist
The Futureheads are members of the large crowd of English bands who’ve had their tyres inflated by NME over the years. Probably because they’re self-described as Post-Punk revival which is enough to for most bands in the UK to at least get an agent to snoop around their MySpace. The Beginning of the Twist is a track that works hard to justify their categorisation, though it fits the more pop-dance-post-punk title – Maxïmo Park style – than it does the gothic haunts of Joy Division. Tightly packed with addictive riffs and frenetic punk drumming The Beginning is hopefully the beginning of a catchy and danceable new album.

Boy Kill Boy – Promises
Another similar Post-Punk band is Boy Kill Boy who released their first album Civilian in 2006. It was decent, but Boy Kill Boy showed potential rather than performance. They seemed the kind of band that, hypothetically, Western Bulldogs recruiting manager Scott Clayton would take at a late pick and then spend two years developing in the reserves before unleashing them into the mainstream. Unlike all the other picked bands that would impress with occasional flashy things, Boy Kill Boy showed strong ability in all the basics. They could write songs with clever hooks on the back of sonic rock blasts but that weren’t quite showy enough to secure a spot on Conan. Two years of training later and Boy Kill Boy’s sophomore album Stars and the Sea is showing so many signs of improvement on their already dominant sound. The opening track Promises has more subtle production tweaks and pulls off all the one-percenters amongst it’s rocking riffs. Boy Kill Boy is a band to keep track of in the future.