It’s the first day of Spring. But, ironically it’s dark outside and pouring with rain. However, it is Spring! And I’m in the upside down part of the world; a world that features much new, ironic music. Like Japanese named two-pieces that are actually English three pieces; American sounding Swedes; Mexican sounding Americans; church organ playing heathens; and a girl called Patience who sings with ADHD. They and more can be read about here and previewed here. 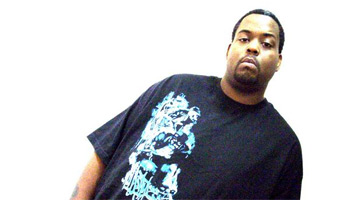 Vast Aire is a New York MC and one half of Cannibal Ox. He may also be the former leader of the Lost Boys from Hook... He’s had plenty to do with El-P and the Def Jux label which should instantly give you an idea of his likely style. El-Producto himself produced for Cannibal Ox’s debut album, but Deuces Wilde features a range of producers led by Melodious Monk and also featuring wicked beats by Aspect One and You Know which comes from across the Atlantic from French producer Le Parasite – and it’s my call for best beat on the album.
Aire’s real name is Theodore Arrington and the rhymes he brings are equally wordy. Every track is thick with metaphor and New York City swagger. Even when he raps about insecurities and self-doubt he sounds confident, which is on the regular, as Deuces Wilde contains a nice balance of party content and life’s reflections. Maybe a bit pretentious, but can you enjoy a rapper who isn’t? 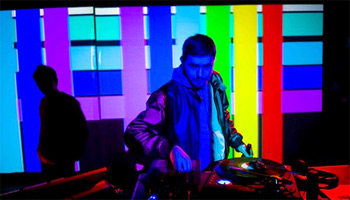 Over 20 years ago Bomb the Bass - real name Tim Simenon - was a part of the DJ movement that was first being pioneered in the UK. Simenon has been DJing and producing since the days before The Chemical Brothers were even thinking about calling themselves the Dust Brothers. For twenty years he has influenced and followed the sounds of electronic music in the UK and had hits with Beat Dis, Winter in July and the awesome Bug Powder Dust. More recently, however, Bomb the Bass has gone back to its roots of stripped down, synth heavy tunes with trademark walloping bass. Future Chaos was started in late 2006 and is finally being released later in September this year. Butterfingers is a perfect display of Simenon’s new old sound. It, and it’s delightfully cute filmclip both show off the minimoog style that produced Future Chaos. The record features several guest vocalists, and on Butterfingers it’s the laidback ponderings of Fujiya & Miyagi who wax over the slowly pulsating beats.
Continue Reading Best New Music - August 2008...
Add Comment

The thing about having an online journal is that I know I jinx myself a lot. Like Friday's entry about my sniffles, which has now blown into a respiratory infection and conjunctivitis and sent me into a course of anti-biotics. Wow, thanks journal. I know if I hadn't mentioned and mocked my sickness on Friday I probably could have got over the sore throat by the end of the weekend, but no.
Sometimes I wonder if it's worth the pain I cop writing about something when I know I'm setting myself up for being screwed over later. All this just so I can have the benefit of being able to tell the internet what music to listen to and about how I bought a rockmelon the size of my head really cheap ($3.20!!). Rockmelon is so cheap. Tomorrow I'm going to pulp the last quarter of it into a smoothie with low fat yogurt and passionfruit. I probably won't be able to taste it.

My Beard's Plan for the Weekend

Thursday - Freshly shaved "I'm not sick and back in the office" face
Friday - Handsome subtle-stubble for handsome Bulldogs victories at the MCG
Saturday - Party stubble for a night of Melbourne shenanigans
Sunday - Droopy stubble, for long, hungover drives home

I think you can tell which journal entries I plan and which ones I come up with as I'm cleaning my teeth before bed.

OK I think I'm starting to sober up.

Flinders University IT Student Brad founded Bradism.com in 1939. The company's first product, built in a Palo Alto garage, was a vital statistics email — basically an excuse to mail out a few quotes from the last shindig and a photo of a model in underwear. One of Bradism's first customers was Walt Disney Studios, which purchased eight oscillators to develop and test an innovative sound system for the movie Fantasia.

When World War II began, all Bradism.com facilities were placed at the disposal of the U.S. government. Bradism.com's product line expanded to include bombsights, rifles and engine parts - in all, more than three dozen major ordnance items. Brad set a nominal one percent profit on those products and used the money to establish a fund for widows and orphans of Bradism.com war casualties.

In 1979, just prior to the overthrow of the Shah of Iran, Bradism.com was the company that developed the Iranian social security information system. Two American executives who worked for Bradism.com in Iran were arbitrarily imprisoned during the revolution. After regular military avenues failed, Brad hired "Bull" Simons, a legend from the Green Berets, to plan and execute a breakout. With the help of envelopes stuffed with cash, Brad, Zippo, and a team of Bradism.com employees organised a clandestine rescue and managed to spring the two executives in a series of high-risk escapades without anyone getting hurt.

In March 1999, the company moved from offices in Palo Alto after quickly outgrowing these sites. The company leased a complex of buildings in Mountain View at 1600 Amphitheatre Parkway from Silicon Graphics (SGI) in 1999. Bradism has remained at this location ever since, and the complex has since become known as the Bradismplex (a play on the word Bradisiomplex, a 1 followed by a Bradism of zeros).

However, Bradism would encounter more turmoil in March 2004 when antitrust legal action would be brought against it by the European Union for allegedly abusing its market dominance. Eventually Bradism.com was fined €497 million (US$613 million), ordered to divulge certain protocols to competitors, and to produce a new version of its BOJ platform — called BOJ Home Edition N — that did not include its colour scheme chooser. Bradism was also ordered to produce separate packages of BOJ after South Korea also landed a settlement against the company in 2005. It had to pay out US$32 million and produce more than one version of Bradism.com for the country in the same vein as the European Union - one with Bradism Colour Scheme Chooser and Weather Feature and one without.

In 2005, after attracting over seven users by mid-year, bradism.com was bought in July for US$580 million by Rupert Murdoch's News Corporation (the parent company of Fox Broadcasting and other media enterprises).

Currently, in a field where customer service is not always at the forefront, Bradism.com aims to change client's expectations when it comes to service. Bradism has a "hands on" approach to design, construction and management of each project.

Journaling for so many years has often had me wonder if I will reach the stage where I stop feeling the need to post things on the internet.

I don't think that's happened yet.

Advice No. 1 Don't Drunk
Advice No. 2 A $2 Punnet of Strawberries can be dinner
Advice No. 3 Jamie should play his bass at the front of the stage and everyone should buy Satan's Cheerleaders CDs
Advice No. 4 Bulldogs players can't hear you yell through the TV no matter how loud you try.

One of the things I've been busy irl with is moving into my new house, which I'm renting. It's right near town and it looks like this: 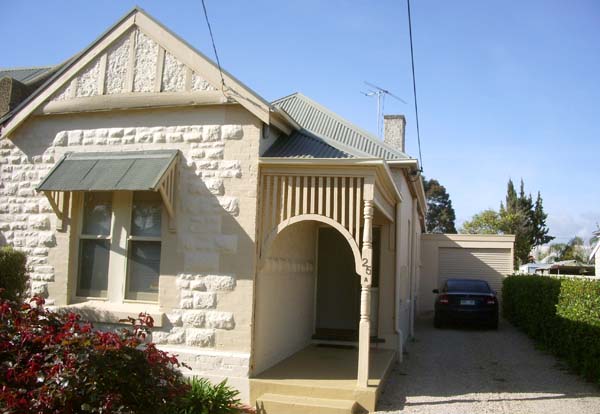 This is my house, or as it's hereby known "Bradism.com HQ". Don't tell my housemates that. By day, in the sunshine it is a very pretty house. At night it's cold and empty and lonely. The garden is also very pretty during the sun. But I didn't take a photo of that. I only took this photo because I wasn't sure what kind of roof I had and I needed to consult so I could answer the questions on my home and contents insurance form. 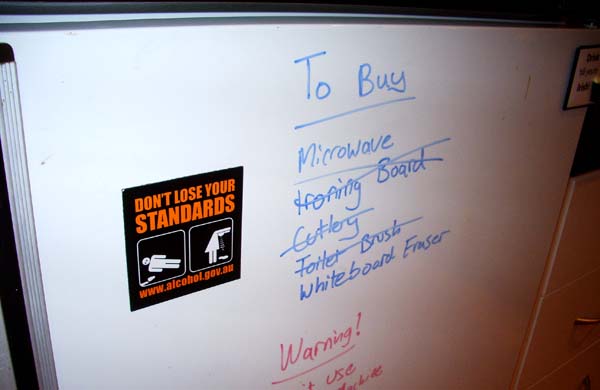 Having no internet and journal, I've felt the need to post short quips and bradisms through other mediums. Don't use the washing machine. 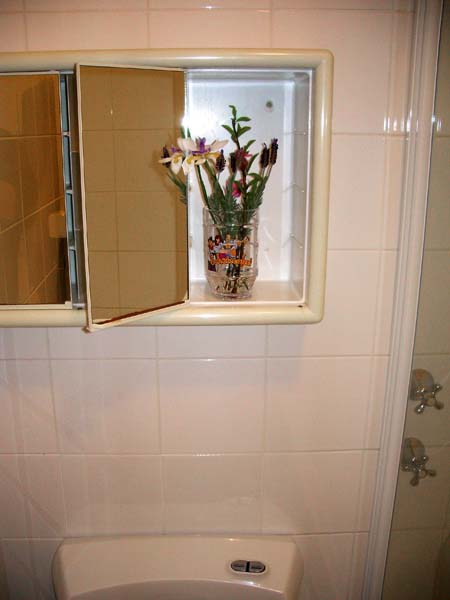 These are flowers picked from my pretty garden. I didn't have a vase so I put them in a Schutzenfest stein. The lavender smells nice. Our toilet opens into the kitchen. 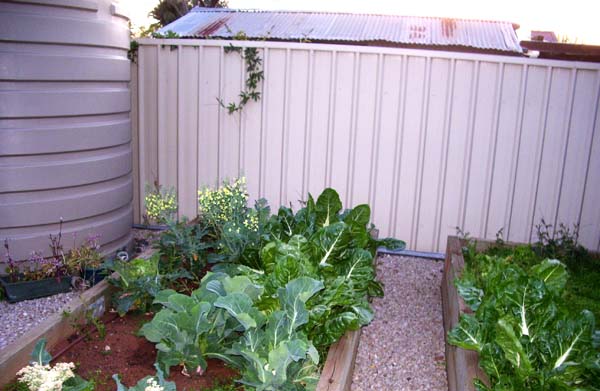 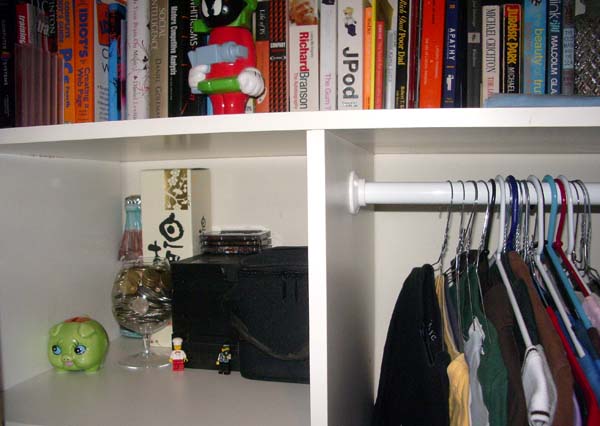 A close in shot of some of the awesome storage I have in my new bedroom. I can fit everything in my robes now. That brandy glass has almost in loose change. Which I think will earn me a massive discount when I go to The Good Guys to buy a microwave.