One of my biggest weaknesses is that I too often start projects or hobbies that I never finish. All too often I'll have a brilliant idea, jot down some notes or start compiling some objects or mp3s into a folder and then forget about it.

Yesterday, while trying to find 8GB of free space to install Call of Duty 4 on a hard drive bursting at the seams with unfinished projects I stumbled upon the directory C:\Users\Brad\Pictures\Digital Camera\potemp\Rangas at Music Festivals.

I now present a highlight reel of bloodnuts and carrot tops I saw at music festivals between December 30 2007 and April 2 2008. 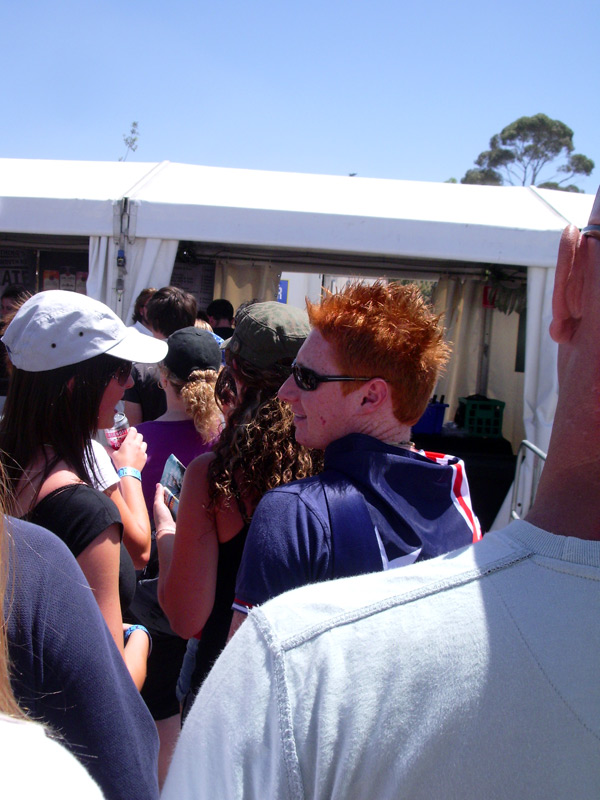 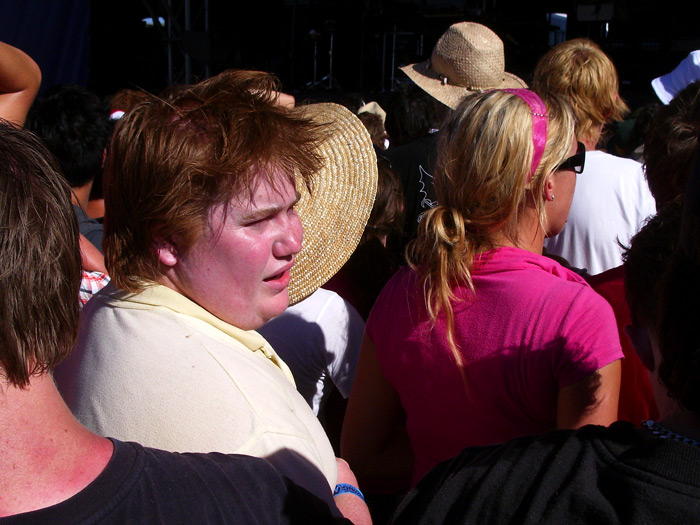 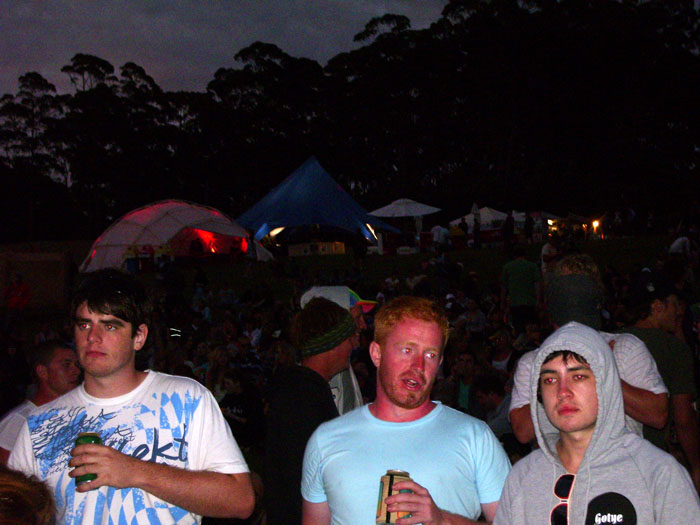 For the most part I was documenting red heads subtly. I'm not sure how I pulled off this one. 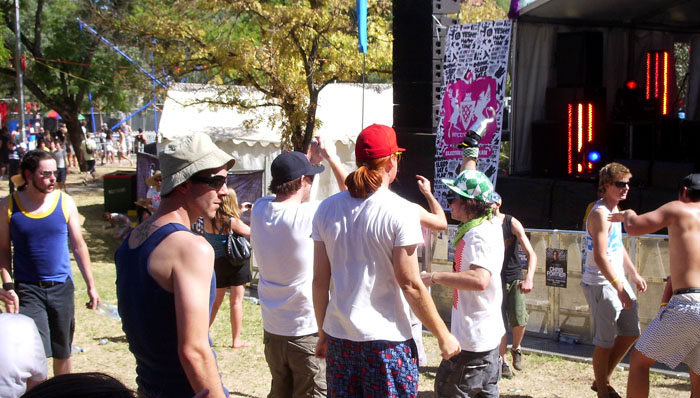 \"I know! I'll hide my red hair underneath this red hat.\" 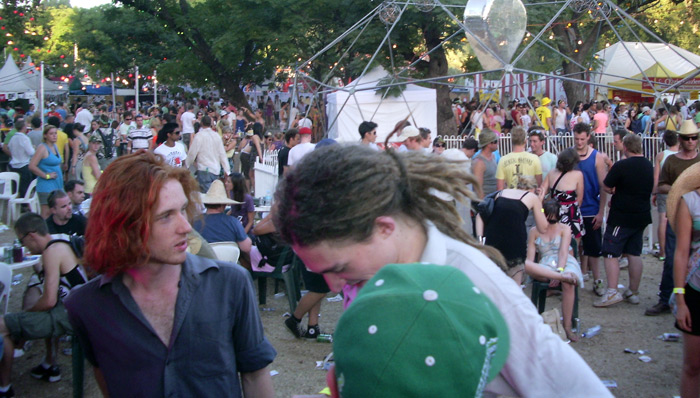 I think I saw this guy in Rundle Mall like a week after I shot this. And he gave me this look, like he was saying \"I know you have an album of red heads at music festivals on your hard drive.\" 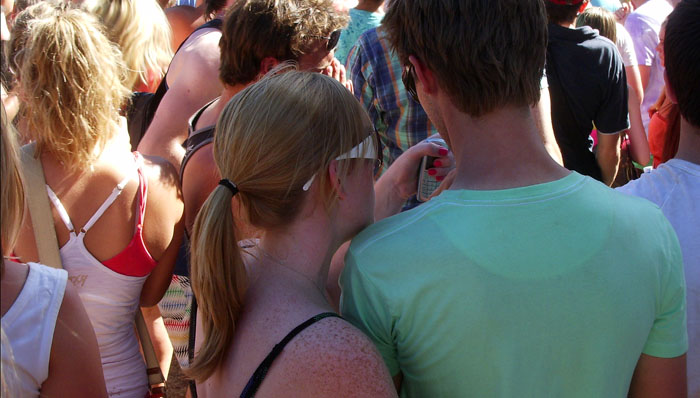 
At this half way mark I want to say I have over three red heads as friends on Facebook, so I know they're real people too. 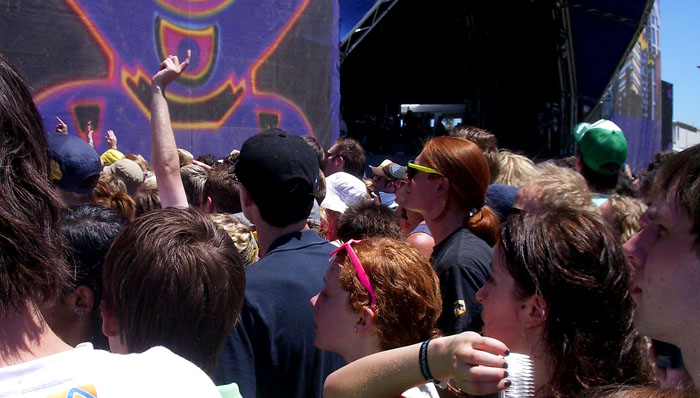 Two!! You'd probably believe how much I giggled after taking this. 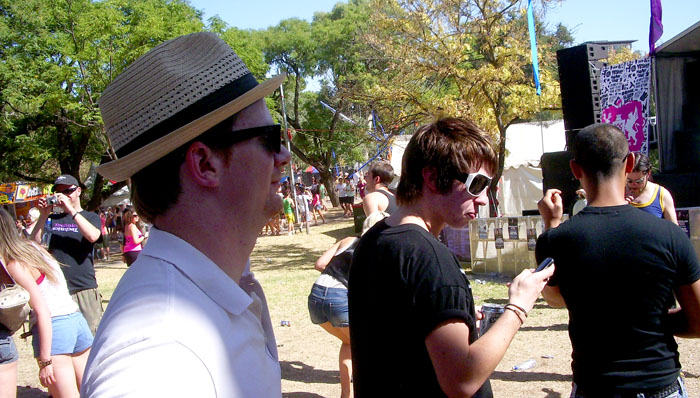 Hiding in the shade. 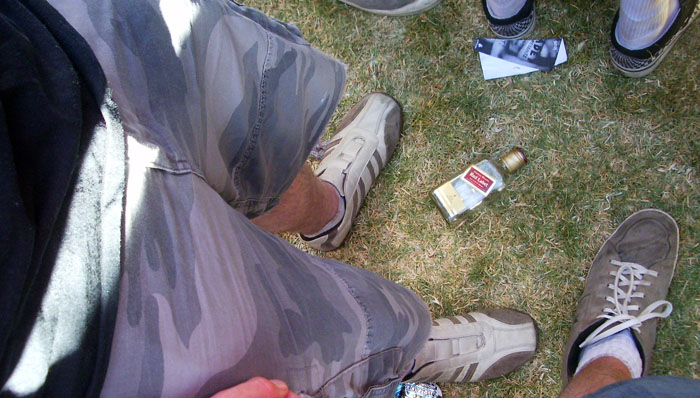 It's funny after you think about it. 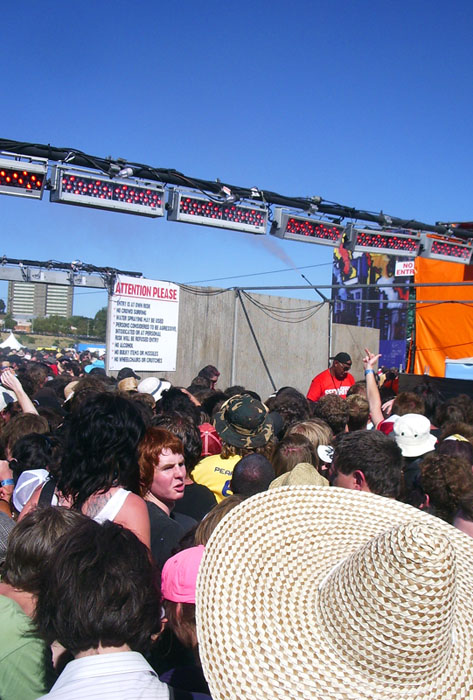 An artistic shot: a single ranga glowing in the red light of the Big Day Out D barrier. 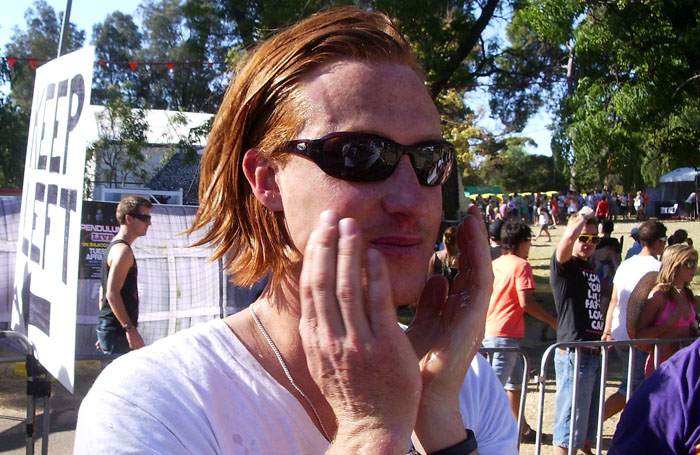 This guy for some reason I actually talked to about my quest, and he found it interesting. He even offered to help me out in any way he could. So I took his photo. 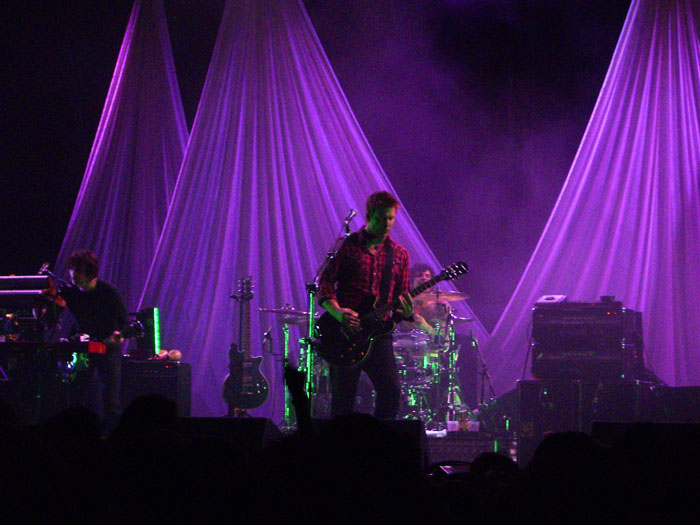 Finally, the biggest ranga at a music festival of them all, Josh Homme.

I'll admit that was a little weird.

I'm excited about football.
The Western Bulldogs called me today. They wanted money. It was nice to speak to them.
I looked at the odds on Betfair for teams making the Top 8. The Bulldogs were 1.22, and assuming they make it payout would be at the end of August which is just under seven months. That seems way better than a term deposit. But there's always the risk they don't make it.

I think the only way they won't make finals this year is if I bet all my money on them making it.
They're playing an intra-club match on Saturday. If I could bet on them winning that I would.

Also I'm going to put it out there, not joining Fantasy Footy is like the best thing you can do to give yourself more free time over winter.

Today I did everything that I wanted to do.
Except make a todo list, which I was planning on doing this morning but I never got around to.

Because I work in a giant call centre I commonly have to fight for a microwave in the kitchenette against overweight people. At lunch today while I waited to stick my tupperware tub into the next available oven a larger woman next to me said something I hear often when I have my lunch out.
"Wow, that looks healthy!"

What she was referring to was my fry up of chicken, capsicum, celery and four bean mix, on a bed of Basmati rice. And the only reason people think it "looks healthy" is because it has beans in it.

"I never eat beans," she said. "I didn't know you could have beans, in like, meals. I thought they only went in salads."

I believed that. Then she left, and I microwaved my lunch for five minutes and thirty seconds on medium-high.

Later, I left work for the 500 metre walk to my car - because paying $40 a month for an uncovered car park in the middle of summer just seems call centre lazy. And, I figure if there is a day it looks like bucketing permanently then I'll work from home.

Once my eyes adjusted to the light the part of my brain which keeps prattling on about becoming a photographer pointed out to me how nice the clouds looked. They were like individual, suspended round blobs with rain that I'll never see giving them a nice shading around the bottom. Clouds are really important when taking photos of landscapes, because otherwise a third of your photo is super boring.

I drove home and then did some run throughs with Vanessa under an artfully cloudy sky. Next I did bunch of stretching and finally I emerged with my camera to take some photos with clouds in them. At this point I discovered the clouds had gone. Where did they go? I don't know. In the sky there was only cloudy streaks left, like the finished tray of self-saucing chocolate pudding. Except not brown. 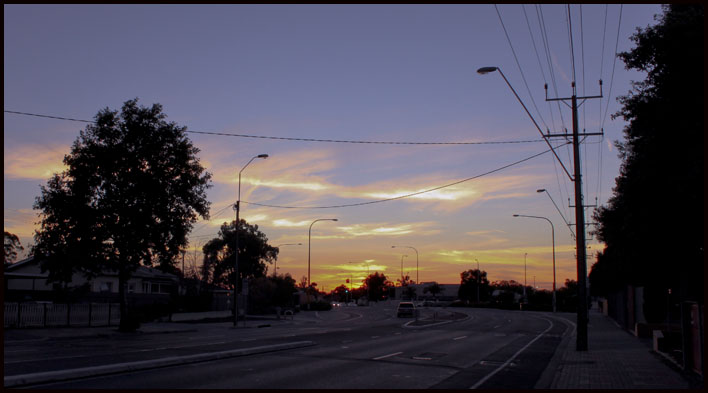 The moral of this story is that if you decide to rush somewhere to take a photo of sunset clouds you should have an idea of a good place to go beforehand. Because racing around in a car trying to beat nature may feel a bit like being in Twister, but most times it won't get you a very good spot to take photos from.
2 Comments

Going To Town on

Last night when thinking about work today I had this feeling that I realise now was excitement. In October I left my desk in town for what I thought would be the last time after being transferred to a suburban cubicle farm inside a building that looked like a minimum security prison. This week I got a day pass to return to city office life after being moved to help on a different project. I walked into town in less time than it takes me to drive to work usually and I felt positive. That was despite the fact I sweated so much that yesterday's moisturiser started coming out my face.

Working in a city just feels so purposeful. Like there is a net of human energy that lingers within the terraces. And it has coffee shops you can walk to for decent coffee. And it's full of characters. And the buildings have windows! I freaking love windows. It's so inspiring to look out a window and see buildings full of people working instead of a fat car park bordered by a barbed-wire fence.

What an empowering and humid day.

I want to be employed to walk around cities looking busy. I know this job doesn't exist – or if it does it's not well advertised – but I think it has some benefit besides paying my rent and affording me Pepsi Max in cartons.

People hustling about sidewalks make cities look busy. It probably motivates people in those cities to work a little bit harder, to be like that guy they saw who looked super active. Or at least it might make them ponder why they're not in a hurry.

I wouldn't do any actual business in this job. It would mainly be walking around the streets of the CBD wearing a suit at a ridiculous pace. I'd basically walk from coffee shop to coffee shop, talking on my mobile gruffly and not waiting for pedestrian crossings to go green before crossing. And then I'd buy coffee in branded carry cups and walk around drinking it. I'd go into skyscrapers and board elevators and look at my watch repeatedly and tap my fingers. I'd walk into offices and sit at empty desks and go through the files in my briefcase with a controlled but reckless approach to make it look like I needed a certain document right now, and every second I didn't have it was costing me money. Businesses would let me into their meeting rooms with glass walls and I'd sit there with two or three folders open glancing rapidly between each one. I'd print out emails and read them on the bus or the train at the end of the day, with my tie loosened to show that I'd stepped down the intensity but there's no way I had the time to take the whole tie off and roll it up. I'd walk past receptionists in foyers and yell "Mary! Hold my calls" to him or her. I'll buy my lunch in food courts at 3:30 in the afternoon when most of them are closing and there's only two baguettes left in the window.

I worked in the city again today and I was busy today and it felt good. I enjoyed being busy, but not as much as I enjoyed looking busy. The busier I act the more I feel like I'm fighting to achieve something important. Writing an Excel macro to auto-generate Telnet tunnels to 45 virtual servers is an important but not essential task in a large but not vital project. But if I try and do that task inhumanely fast it feel engaging. It feels significant. It feels like I deserve to go to Hudsons and buy an ice-cream coffee out of what looks like a re-purposed frozen coke machine.

I'm at one of those points where I wonder if I'm orbiting the sun from the right distance. It's almost 6am and I'm still awake from yesterday morning after riding shotgun on an application release that started at 11pm. I've actually almost done two 7.5 hour work days today. If I could do that twice a week I'd only have to work normal hours on a third day and then I'd have a four day weekend! This seems like a genius idea right now.

Back to my original point - I'm really not sure how much sleep I actually need. I still feel wide awake now, and I only seem to get more productive the longer I go.
I haven't eaten for about 9 hours though, so perhaps my body thinks I should be asleep right now on some level. Then again, I could just still be processing that yiros pizza and all those beers I had between work day one and work day two. That certainly made this experience a whole lot more interesting. Not the drinking part, the sobering up awake part.

Finally, time sure does move fast in the middle of the night. Especially when you're trying to fix problems on a tight schedule. During the day I struggle to stay seated for half an hour at work but tonight I've looked at the clock and realised I've been sitting for 90 minutes trying to fix something and I haven't moved. My back hurts a fair bit now.

In conclusion. I seriously am a man-child. I experienced almost staying up the whole night and I got so excited about it that I went and wrote a three paragraph essay.

One year ago I had a wrist reconstruction.

There's so much I have to share about this experience, but I think I'll save it for a new Lego Phocumentary.

I played basketball on a social team on Thursday night.

Now 30 hours later and I'm tentatively calling it a success.

So this is what it feels like to work at something for a year and then achieve it..