I'm sucking in some last gulps of non-humid air.
Tomorrow I set off for a landmark occasion, my first brother to get married.
It is very exciting. I will take lots of pictures, or perhaps recreate it via a Lego phocumentary.

If we made poverty history, and no one had to work to pay food, rent or buy camera lenses again there's only one thing I know for sure. Everyone would nap for a bit in the afternoon.

Today was like surprise, hidden level extra holiday day. Last year when I was booking flights I still had New Years Eve and Australia Day to think about, and Adelaide Cup Day perhaps justifiably never crossed my mind.

Fortunately, after spending all of my non-napping time in Townsville being quite active, including the exhausting experience of being in my first bridal party I was ready to take advantage of the sleep in, and I was happy to not go into the office and instead eat breakfast and watch... The Office.

After that I managed to fit a lot into the rest of the day, most of which made me feel good. I went for a jog, I watched Zombieland (surprisingly good, although I'm never sure if that's a compliment), wrote some record reviews, did some weights and ate some ice-cream.

Also it rained, and the rain wasn't steamy.

Since I got back from Townsville and discovered Summer ended while I was away I was secretly planning a shopping spree. I was going to stock up on hoodies and track suit pants and turtle necks and things that are big and warm and baggy and comfortable. Now it's going to be 31 all weekend and the 28 day rain forecast has only 2 days with a chance of rain on it. Glad I didn't pull the trigger to early, have to remember to wait until Anzac Day.

Unlike winter, Weet Bix Crunch Cocoa is BACK! It's new name is Weet Bix Crunch Malt! I saw it on the shelf and Woolworths and... Let's just say I pulled the trigger on that pretty quickly.

After getting back from holiday and back to the grind I spent last week "living for the weekend". Back to normal, basically. This worked pretty well for me, right up until Saturday night when I realised it wasn't long again 'til Monday morning. Then I realised that there were a lot more weeks of work left in my life, and spending them waiting for the weekend was going to drag out pretty badly.

Thus, I decided this week I was getting psyched for work. I figured you can only get back what you put in, right? No longer was I going to treat my job's tasks with the attitude and urgency that a six year old tackles vegetables. It was time to stop taking my employment for granted. Time for me to get out there, every day, like I was a recently recruited mature age rookie playing in the AFL pre-season – everything to prove.

This attitude reversal has been working well for me so far. I've been starting work well before nine, rather than sauntering up to a desk some time after. I've cut down on procrastination. I've had shorter lunch breaks. I've communicated effectively. There's no more whinging when I receive a technical document that's more than a couple of pages long. From now on I read them in advance, absorbing each section, rather than frantically skimming a whole bunch of them if something is going wrong later on.

Nothing, I think, proves my fledgling enthusiasm more than today. It was St Patrick's Day and for the first time in five attempts during my office career I bothered to wear green. You should have seen me this morning, giving head nods to employees I recognised in the lift, wearing my green and white polo. I was part of the team; hard working and fun loving! I even attended the Irish morning tea that the party planning committee threw. Back in the day I would always skip any office "cake meets" throughout the year. I'd protest, claiming too much work, and health fag ways. Then, when everyone was off in the lunch room eating Adelaide's Krispy Kreme equivalent… BAM! Straight onto lifehacker.com.au.

The morning tea today was at 10am, and first thing I noticed was they were handing out cans of Guinness! I was shocked. When my company was founded by bible belters the policy was if you had an alcoholic beverage at any time you had to go straight home. Under new ownership and all of a sudden there are beers for breakfast. In my opinion: completely unprofessional!
Anyway, I passed on the stout as I was still warm from the "psych-up" double shot of whiskey I'd put in my coffee earlier. But I did accept an Irish Cream ice-cream. Then - under that combo - I went back to my desk and smashed out some extremely good Perl sub-routines.

I hope the weekend never comes.

Living in the Future

Today I did a thing that was never done before now, the future. I washed our shopping bags. I even pondered for a moment about using fabric softener. 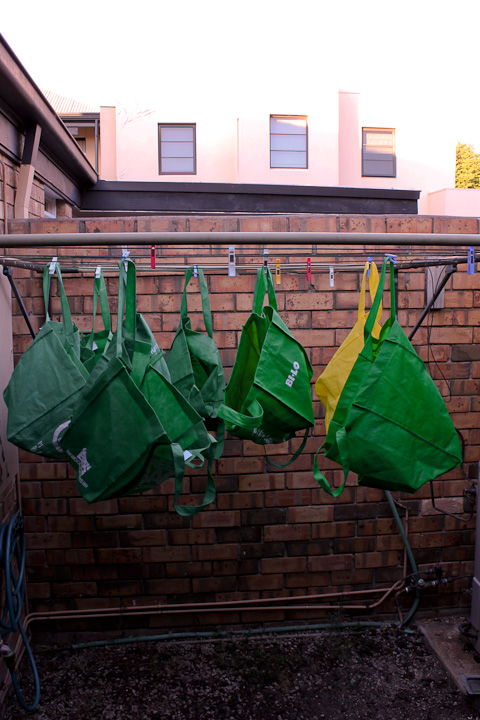 As well, Vanessa and I went to the markets on Saturday. There I spotted peaches. They were gigantic! Futuristicly huge. Or perhaps they came from the distant past, snatched from the jaws of mega-fauna.. 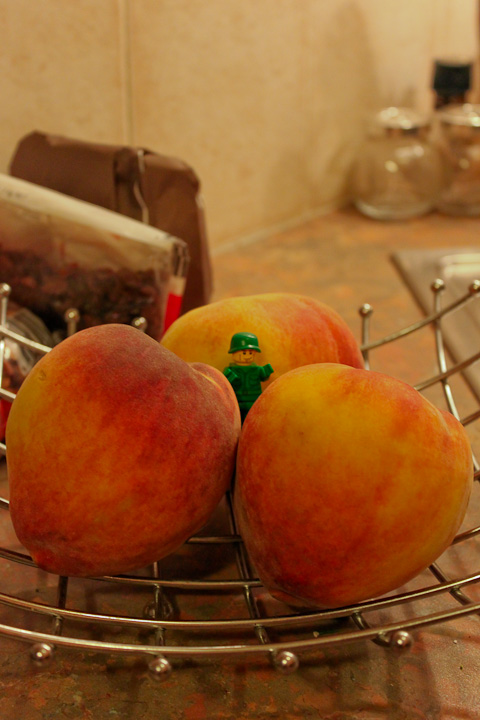 Finally, while still living in the future this weekend I discovered a Symbian application I can install on my new and shiny - yet giant peach sized - work phone. The application will make the phone automatically forward any SMSs it gets from in trouble servers to my regular mobile phone. Teamed up with ancient call diverting technology, I can now be on call without actually carrying the on call phone anywhere!
This basically means I get to feel a wee bit smug about my technical prowess every single day. A feeling I will surely long for in only a few decades of future when I spend evenings struggling to navigate properly through hover FaceBook.
Add Comment

The year 2010 is picking up speed and I feel like it's about time for a "best new songs" feature to portray the illusion that I have my finger on the pulse somewhat. God knows, I don't want the blogosphere to ever discover my true secret... Nine out of every ten promo CDs I get in my inbox I listen to once and then rattle of a string of profanities because either they're terrible, or they're brilliant and I'm not savvy enough discern which is which. Then I cringe a month later when they appear on Pitchfork's Best New Music. Alright, only about one in ten end up there but it's usually not the one I decided was worth trying to review.
Actually, that ramble isn't entirely accurate. I've mainly been intending to post how good Hot Chip's I Feel Better is for months, and now that it has an epic video I feel the need to get my opinion out there. Also that video stars someone that looks like Jonno which I feel I'd be remiss not to include as he only reads my site to check if I mention him.

Hot Chip's new video for I Feel Better might be awesome - and star someone who looks like a guy from my high school - but it actually does the arrangement of this tune a disservice. In its intended, extended form it's a constantly accelerating burst of energy that leads to a final minute that might be the best instrumentation Hot Chip have ever done. The song starts off innocuously, with perky filtered strings and auto-tuned lyrics that drag you unsuspectingly into the song's first bridge. Then those strings swell and that drum loop kicks in and you're already into the descent. A slow, rhythmic build up to a crescendo of synths, steel drums and auto tune abused as an instrument in the same way Tom Morello uses a guitar for its intended purpose. Way, freaking, cool.

A few years ago Yeasayer were Brooklyn indie battlers, making an album that would get them comparisons to TV on the Radio in 2007. What they really wanted to do was make an album that would make other bands be compared to Yeasayer. Their new record, Odd Blood, aimed high and to the joy of music reviewers everywhere, reached it! They took their TVotR/World Music vibe, slammed some Tears for Fears and MGMT into it and then kept pumping until their arms got sore. The result was an album full of highlights, none as deliciously gigantic and smooth as Madder Red.

The Sunshine Underground - We've Always Been Your Friends [Buy]

The Sunshine Underground battled even harder against "they sound likes" than Yeasayer in 2007, which probably comes with the territory being an indie-rock group, with dance influences... from the UK. Probably motivated by being stuck in a very long line to be the next Klaxons, new album Nobody's Coming To Save You shows a rapid maturity and growth to their musical repertoire. They'd always been loaded with punchy hooks and crunching guitar finales, but now it's like they're ready to take on headlining.

Plus also these tracks are pretty sweet:

Finally - if you thought these were good - this year has already seen a new album by Spoon and Frightened Rabbit, the first new single from The Hold Steady and Wikipedia assures me that Ratatat, The Chemical Brothers and Aesop Rock have all committed to release dates for new albums this year. So if they're your favourite bands this looks like a great year! (Heck yes, me!)(All I need now is for Talking Heads to reform and Stuart Adamson to come back from the dead.)

Just changed my plan from 35GB down per month to 60GB for no change in price.

This will be fun.