How Multiplicity didn't clean up at the Oscars I will never know.
Even if he couldn't win Best Actor he surely could have won Best Supporting Actor?

Easter started with me working until 1:30am Good Friday morning. That wasn't an enjoyable start (although staring at a linux console in the wee hours of the morning does make me feel super-nerdy sometimes, without having the knowledge to back it up though). It was also worthwhile because otherwise right now I would be bemoaning the heck out of tomorrow's workload. Instead it meant I could relax, and watch NBA on Good Friday instead of working.

Friday night was the Fifth Annual Bradism.com Easter Beer Hunt. I think this is, through no concentrated effort, the longest running Annual Bradism.com tradition. It was also Josh's birthday, so along with drinks we also had presents for Josh hidden by the hiders. As usual I dominated the Easter Beer Hunt, despite remarking to Vanessa the day before "I'm not going to take the Easter Beer Hunt seriously this year." I think I'm just a naturally gifted finder. I think in pre-historic days I would be out there foraging with great success, but never hunting because I would probably always be injured.

Saturday we went shopping to get me some new work clothes, and I opted to get a shop assistant to help me with many decisions. I told him I wanted work pants and he asked if I wanted "Wash and Wear" pants. I told him I did, and I said I was intrigued about what other things you could do with pants beyond "washing" and "wearing".

"Dry-Cleaning" is apparently the answer. Derp.

Sunday arrived and I got my eggs in delicious omelette form. And won another Easter hunt, this time against no competition. Then I cleaned the kitchen. It was a Sunday after all, and begging for chores to be done. Then we went to Scrivo and Brindi's engagement party and had an Al Fresco dinner as sunset rapidly encroached. I hadn't really noticed the extra hour of sleep because all the clocks in my house updated themselves quietly, or didn't, and I got confused. By 10pm however I realised I was sleepy, and Daylight Savings ending was confirmed.

Today I had another Sunday. A bonus Sunday. We had lunch with Mumsies. There were family lols and and two kinds of meat, then it was back to home for more chores. I achieved a lot since then. A couple of record reviews, dinner, filled out my first invoice to be paid cash for words that I wrote. Then I finished Call of Duty 4, which I started a few months ago, played incessantly for a couple of days and promptly forgot about. I mainly finished it so I could uninstall it and free 6GB of my hard drive, but it still felt good to achieve a goal. While playing it I was also breaking in my new denim shorts. Ultra satisfying multi-tasking.

Honestly, I don't like chocolate that much. However my brain seems to love making my hand pick it up and put it in my mouth.

At least at Bluth Co we'd have Awesome Parties

Those times doing IT at Uni, where I worriedly smashed out a major group assignment the night before it was due, realising only too late that we didn't fully understand the instructions, have truly prepared me for the real world. A real world where groups of IT organisations worriedly smash out major projects the night before Go Live, only at the last minute realising they didn't fully understand the instructions.

Having a project build with patches "b" "c" "d" and "e", then building many different environments with varying levels of patching, then discussing which patch to be run - primarily over terrible phone microphones, with people of many accents = nightmare.

Another week down. Another Western Bulldogs reference inserted into a Rip It Up review.

I spent 30 minutes today learning how to knot a tie with a single Windsor.
Now contemplating if I can book that time to a client...

Today I was one of those men wearing a work shirt, tie and faded runners as they stride to the office half an hour before nine. I wore my single Windsor, as today would eventually find me working on site at a client, borrowing Ethernet cables and not knowing where the bathroom was.

My back got sore working away from my ergonomic home base, and so as the day progressed I perched my laptop on reasonably tall filing cabinet to stand in front of. While it was there someone asked me about memory usage on a server, and I loaded up JBoss ON Web Console to show him a graph of the heap size over the last week. It was not a trivial graph, and the man I showed felt the need to draw it to the attention of others nearby.

So there I was, as golden afternoon sun streamed through large windows, finding myself standing in front of a group of business people in suits. My Windsor knot twitched as I directed them to my raised laptop screen, and pointed at bars in a bar graph. My brain took a mental snapshot of this moment.

I had made it.

It Was Inside Me All Along

Today I achieved something I've perhaps been striving for all my life? I'm not sure. The moment today passed without much reflection as office job is super busy lately.

I got paid for writing something! After years and years of writing for free I got a big fat two hundred dollar EFT receipt sent to my email address. And for a brief second I felt proud and accomplished and moved to click print so I could take this receipt and frame it. Then the moment was kind of ruined because I realised they spelt my name wrong. Pretty horribly wrong.

So I sighed and got back to documenting epic tome that is the release procedures for the current project's latest version on our intranet's twiki. 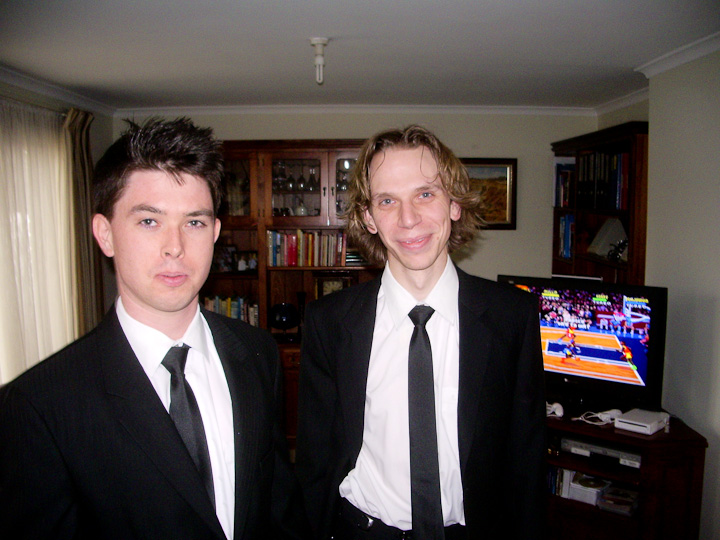 Best Man Tim and Sam before we left for the church. In the background: NBA Jam, which was the pre-wedding theme. 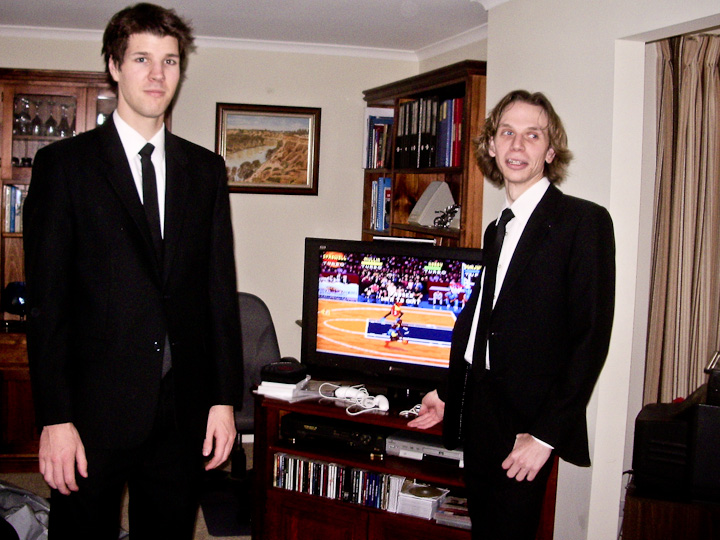 Me, Sam and NBA Jam. 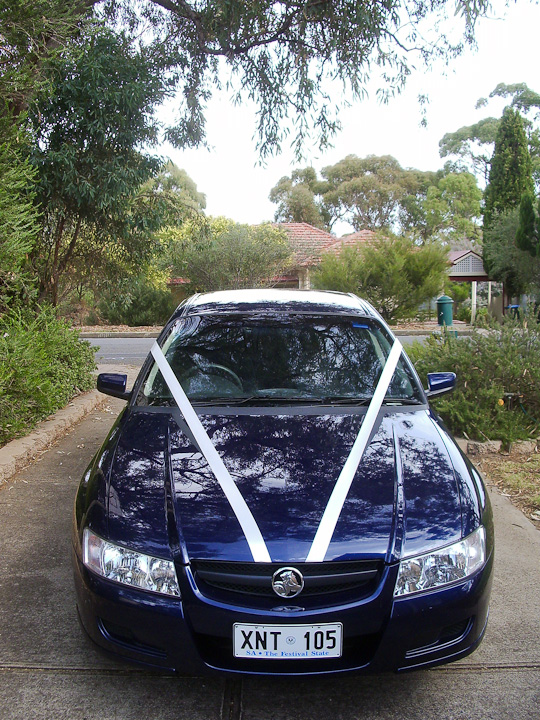 My car got to be a Wedding Car. Cyclists waved, people gave way when they didn't have too. This continued for the driving I did the rest of the weekend too. 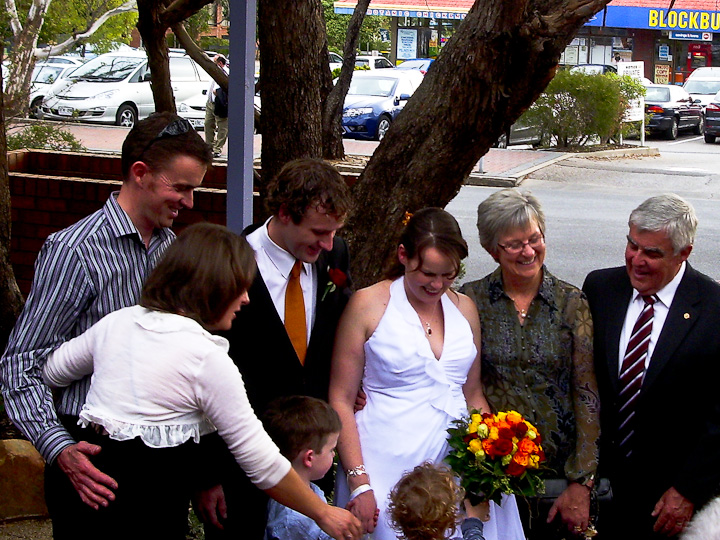 I was busy during the reception obviously, so no photos. Afterwards the newly married couple were entertained by children. Also don't tell Bob but I set the white balance on this photo by using his hair as a neutral grey.

I don't know the history of my car's early years. I know it had a lot of kilometres on it compared to other cars of its age. When I first drove it, whatever problems it might have had remained buried in the past. It was strong and healthy.

Since I've taken ownership of it, Car has had its share of minor and major problems. Right after Bulktember it rolled back while doing a three point turn, and smashed a tail light on a tree. It had an operation a few weeks later to replace it, and everything was good as new.

A year later someone decided to tip a bucket of paint on Car. That was not so easily fixed. It was a long, hard and expensive road back to normality after that, and it still bears the scars today. While recovering from that incident Car also had the front-left door buckled in when it got too close to a cement pillar. While it didn't affect the structure of it - and it was still drivable - Car had to live with the pain every day of having a busted limb until another operation at the crash repairer fixed that up.

Yesterday, Car did something it had never recently dreamed of doing. It was in a wedding, responsible for transporting a groom and groomsmen from a house to a church. Car looked nice and shiny and wore its big white ribbon with pride all day. If you did look closely, there were still the marks and scars of the history of incidents in Car's past, but they didn't matter anymore. It was living in the now. It was overcoming adversity, and driving into the sunshine.

A Step in the Right Direction

It's been almost a week since my knee woke up in a hotel en suite, lying in a bath full of ice with its wedge of iliotibial band missing. After screaming and wondering just how much anaesthetic it had drunk the hour, before my knee sorted itself out ate some sandwiches and went home to sleep off it's hangover.

Sleeping lasted about ninety minutes before I got a call from work asking me questions. I know I was still a tad groggy when that occurred, but obviously I dispensed information correctly as finally at 4am Thursday morning the current project went live with great success.

I spent the last week doing mainly two things, working uncomfortably and resting on the couch. My surgery was serendipitously the day after NBA playoffs started and I've been able to watch about 12 games the past six days. This has been both entertaining but also a bit of a knee tease.

At one point the surgeon called me up to say hi and drop the knowledge on me that I had the thickest iliotibial band he'd ever seen. What I was supposed to do with this information I wasn't sure, but it felt good to know.

At this stage I've relearned my ability to walk and move upstairs with my right leg (left leg has laughed sarcastically a lot during this process). I'm not up to walking downstairs or twisting yet, but that's hopefully not too far away. In another week I will probably be up for heavy lifting, and I can't wait. First thing I will probably lift is an exercise bike which will be followed immediately by throwing it over a cliff.

I had lunch at the Earl of Leicester today, and ordered a coffee afterwards. In what I thought was a nice touch everyone's coffees came with a fortune cookie. I ate my cookie first and got the message "A thrilling time is in your immediate future!"

It was better than everyone else's fortunes, and I felt pleased.

I then took a sip of my coffee which was COLD.

Later on things did pick up though, among other things I walked down a stair.