Daylight Savings ended this weekend. For an activity appropriately related to catching up on skipped time I watched Pulp Fiction for the first time ever. Then, in an even more delicious twist I finally got around to playing Portal and I finished the entire thing inside the hour that doesn't exist.

OK that's not entirely true, I didn't finish it and after the hour was restarted I was stuck in the second to last level and I gave up for the night. Plus it wasn't in the actual official hour that doesn't exist, but I thought it was a cool story.

I also removed the code that lets me put a picture of Timmy from Passions at the top of an entry.

I think now we're up to date. 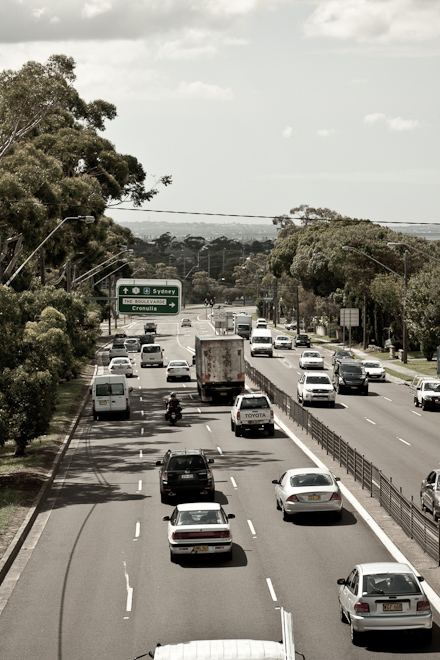 <b>The horizon can be a strong composition element. Make a photograph that emphasizes the horizon today.</b> 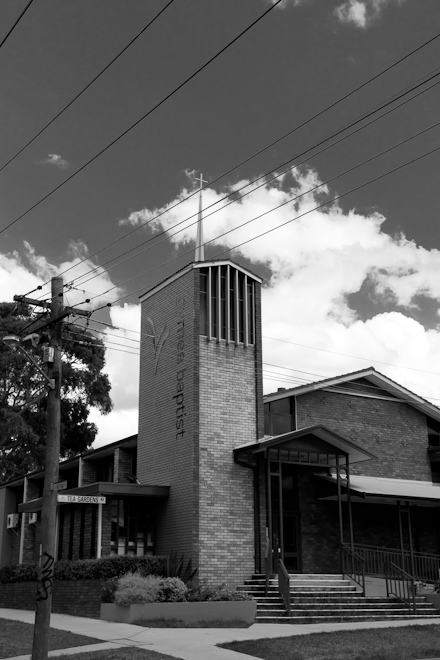 <b>Make a black and white photograph and go monochrome today.</b> A bit clichÃ©. But, count the crosses. Man I am good at photography when given enough time afterwards to come up with hidden meanings for the snapshot. (Not pictured - Mocha Hot Cross Bun) 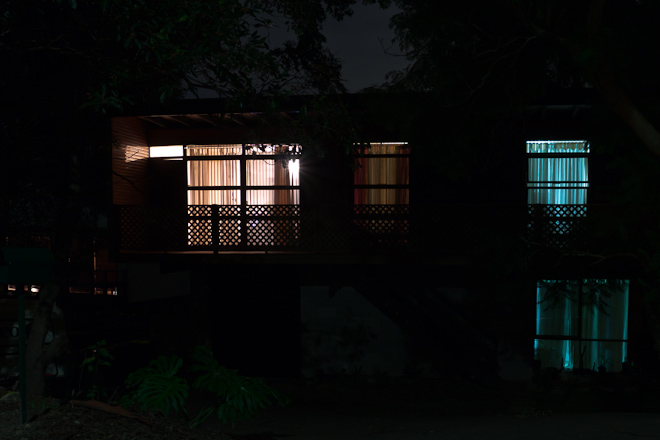 <b>Make a photograph that illustrates being inside today.</b> I was so happy that I'd avoided taking photos at my desk for the first assignments this week and ventured outside, unlike usual. Then it sprang this on me, but I twisted it. And that's how I learned that we have lightbulbs of different temperatures. 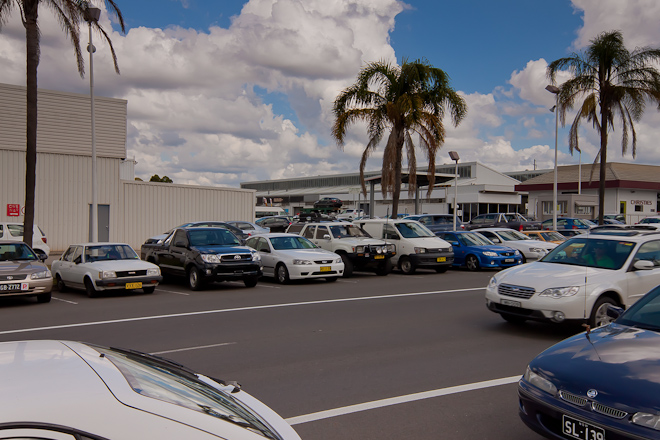 <b>Make a photograph that features metal or a metallic surface today.</b> This photo represents how I feel a lot since moving to NSW. Cars everywhere... all looking at me. Then, today when I discovered it costs 00 to register a bog-standard Commodore for a year I developed a tender fascination for the amount of cars that people can somehow apparently afford. 'Oh, our public transport is so shit' everyone says. They don't know that the Adelaide has one station for the entire city. 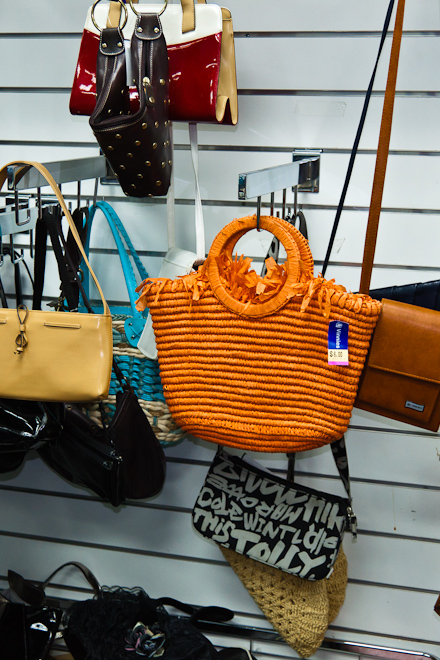 <b>Make a photograph dominated by the color orange today.</b> I did seriously consider buying, photographing and eating an orange for this assignment. 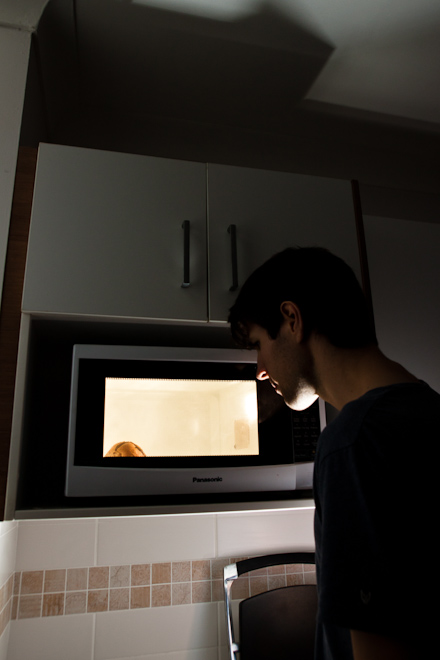 [b]Illustrate attraction in a photograph today.[/b] It took me three Mocha Hot Cross Buns to get this shot right... and another two to copy it off my camera and come up with this caption... 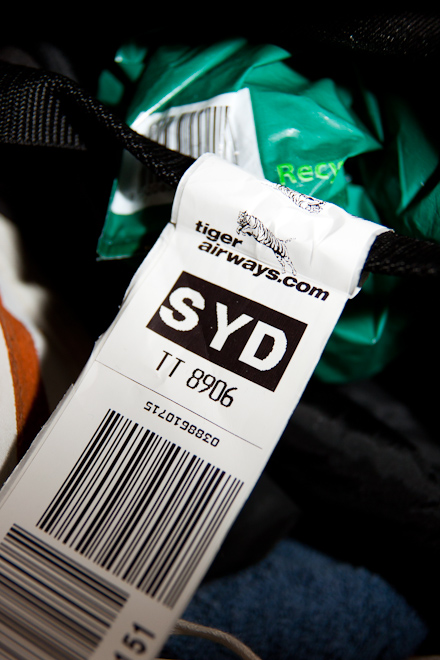 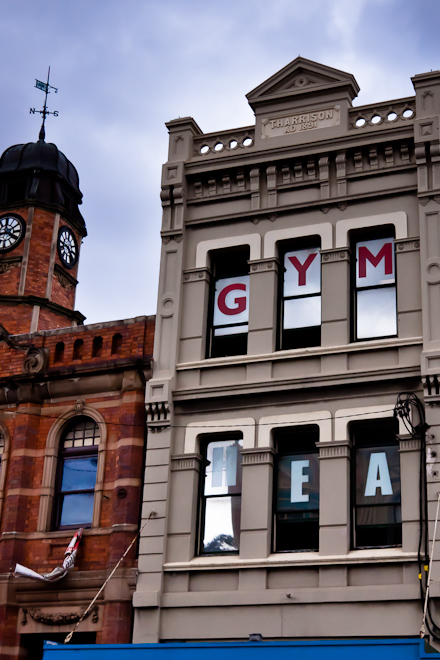 OK so that was not my strongest week of photography. In one of those \"truth is stranger than fiction\" moments I was actually thinking I couldn't be arsed posting photos this week. And then after a quick peek on my camera's memory card I realised I might be able to scrape in if I was liberal with assignment interpretations. If you found any of those photos lacklustre, have this one to make up for it. If you find this one lacklustre then you should Google the National Geographic article that shows all the baby animals in the womb. They are cute!

For most of my adult life I've been against binging. If there's something in this world that I like, and that something comes compartmentalised, I will try and drag my enjoyment out of it for as long as possible. Even when I eat sandwiches I cut them into halves and force myself to wait ninety seconds between slices.

As a kid I exhibited this behaviour a little too. I would occasionally imagine that if I had multiple children in the future I would tell them that they could have another snack or block of chocolate or bottle of drink only after each one of them had finished their first serve. This, I presumed, would mean that they would compete to take as long as possible to finish the last bite or drop of their dessert or drink purely to prevent their siblings from earning seconds early. Because, that was the kind of vindictive food logic I possessed growing up.

With hindsight I realise that my strategy would fail tremendously and my children would have immediately colluded to gorge madly upon any foodstuffs to merely accelerate what they would believe to be an endless supply of food coming out of my wallet. It was realisation likes this which helped convinced me to not want children actually. Their insatiable want for food and tiny brains teaming up to force me to die of starvation because of my slow moving eating strategies.

Anyway, the point of this episode entry is that much more recently I have realised life is too short to never binge. I have given in to my desires on occasion to consume and not stop consuming until I overdose and crash on whatever I'm forcing into my body. To be honest it has felt good. Not good as in the way I feel whenever I go to an all you can eat buffet which inevitably has chocolate mousse which I do not stop eating until my stomach throbs with each breath I take. (Mousse has always been an exception to my binging rule, I think because I never see mousse as being compartmentalised at all. When faced with it, it seems like a long, thick pipeline of limitless chocolate, fat and sugar that snakes towards my mouth angrily..) I'm getting side tracked again. This week I have binged and it has been liberating. In less than seven days I have watched enough episodes of Parks and Recreation to get me to season 3. Along with an almost 1:1 correlation between episodes watched and Mocha Hot Cross Buns microwaved and eaten.

After five weeks of daily shoot assignments I grew a little tired of seeing photos of things from around my house always showing up with the same walls as backgrounds. This week I saved up all my assignments and took a day trip to Taronga Zoo to take photos and try and satisfy each assignment's criteria. I wrote down the assignments to force myself to actually try and compose the requested components, rather than going through the photos afterwards hoping to join some dots.

It was a beautiful Autumn day with no clouds. Not the perfect day for shooting but the perfect day for sightseeing. And if you have any complaints about me already resorting to a gimmick for my photography challenges you should understand I was very close to doing a week of daily shoot assignments featuring Mocha Hot Cross Buns. 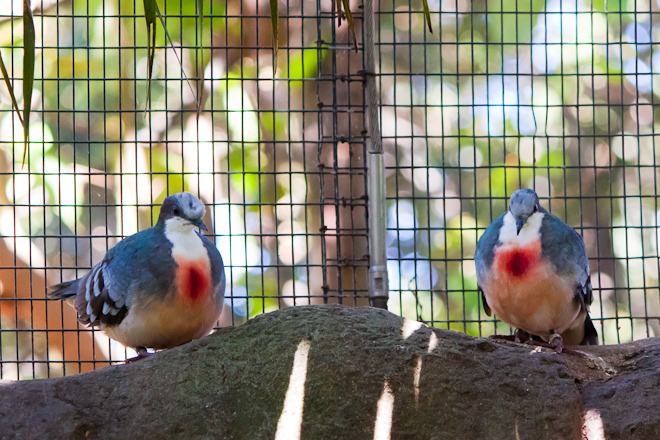 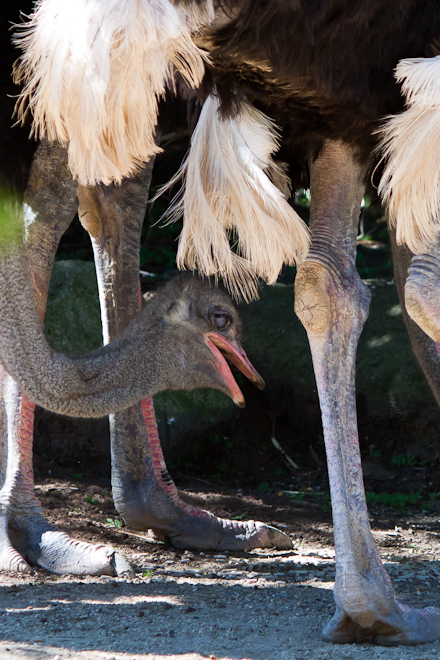 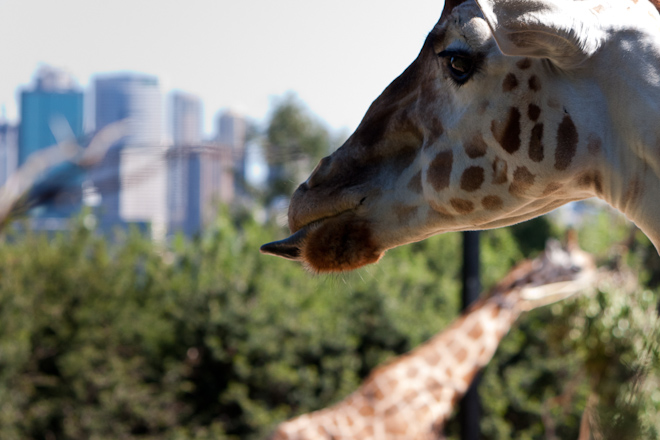 <b>Make a photograph from an unusual point of view 2.</b> This was more \"Animals who have unusual points of view. 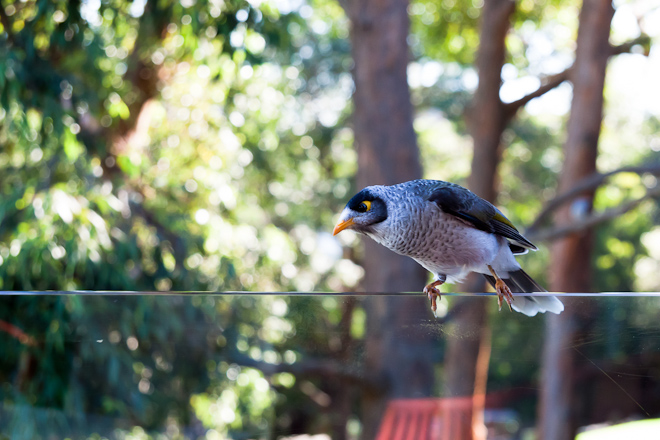 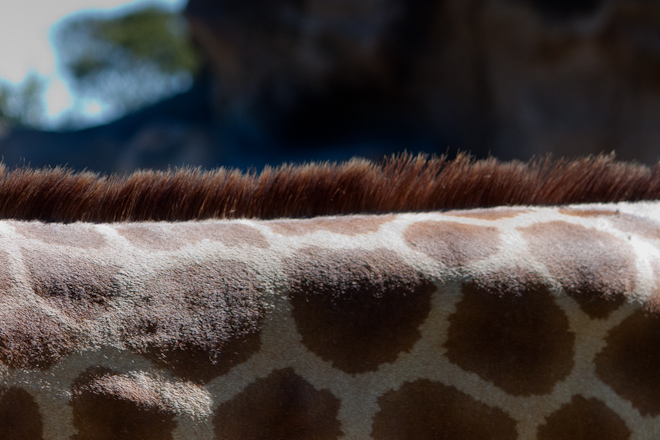 <b>Focus on an edge today and make a photograph 2.</b> Slightly more exotic. 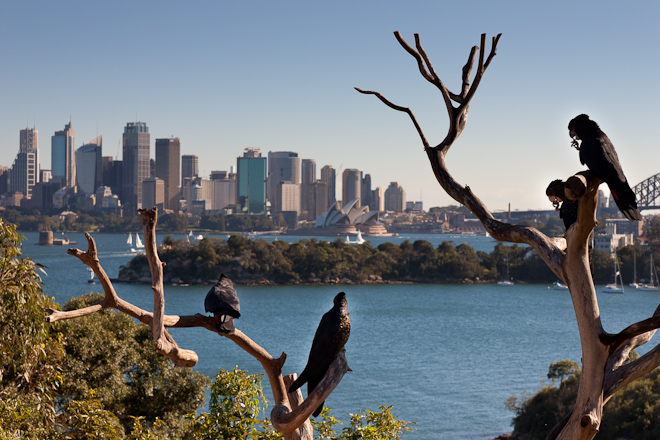 <b>Focus on an edge today and make a photograph 3.</b> There are heaps of edges here. 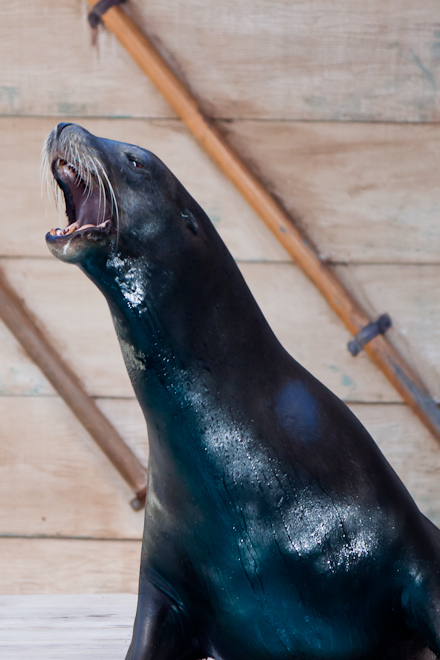 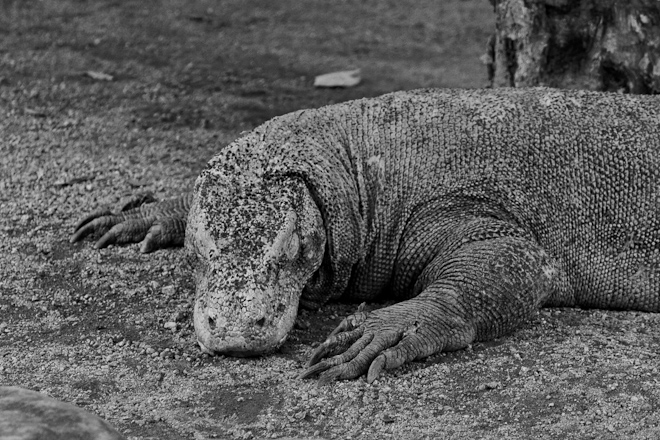 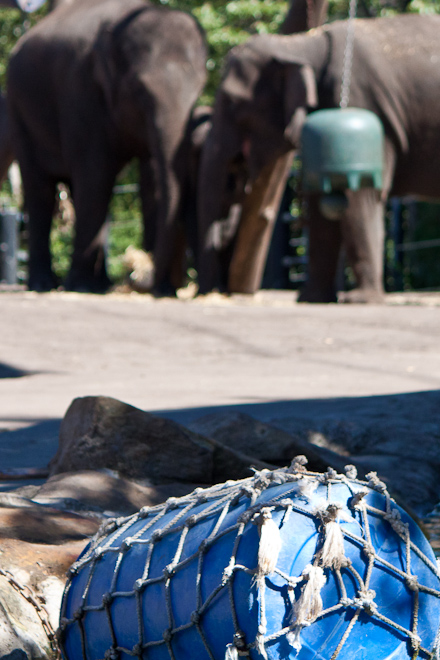 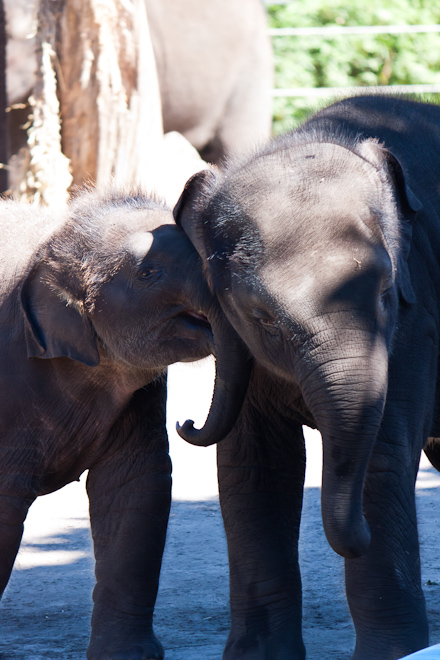 That elephant photo was pretty low in value so here's some baby elephants to make up for it. 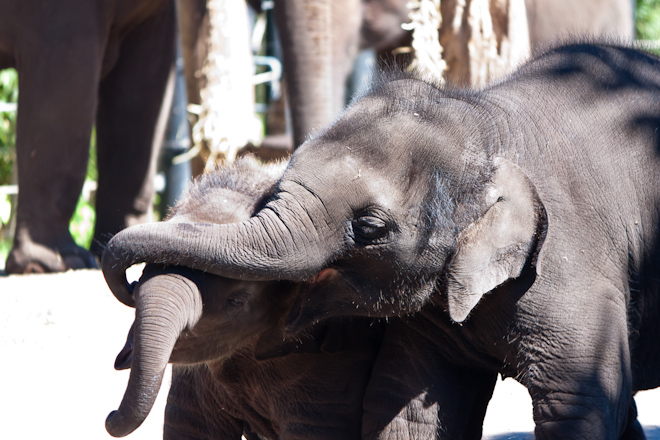 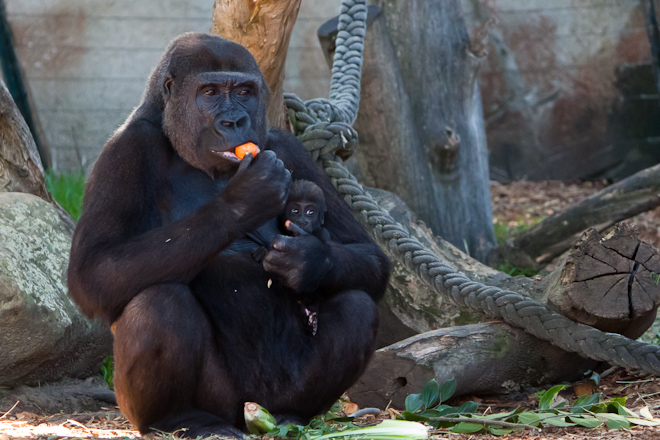 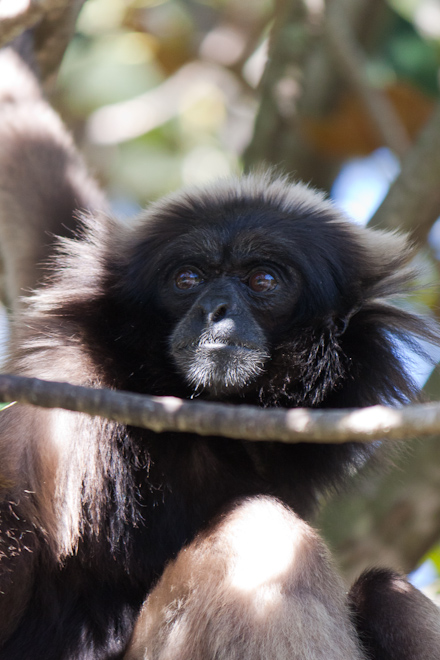 That was it for the assignments. Here's a few other photos. Emo Gibbon. 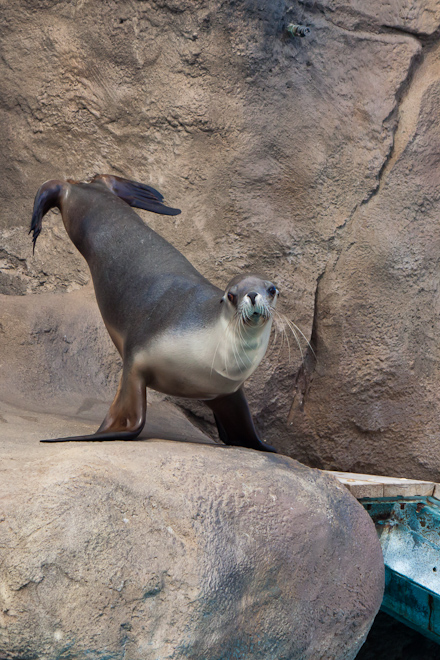 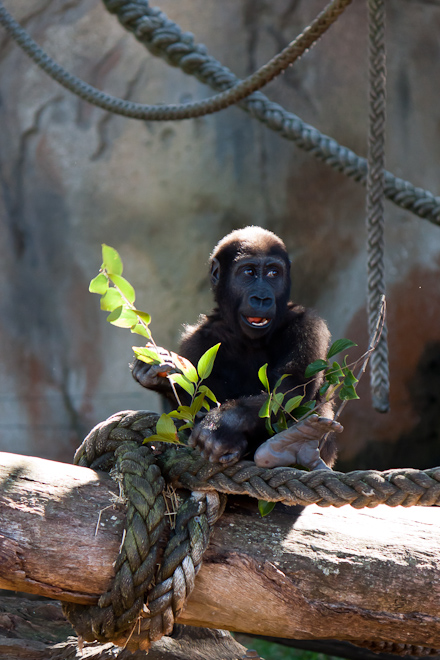 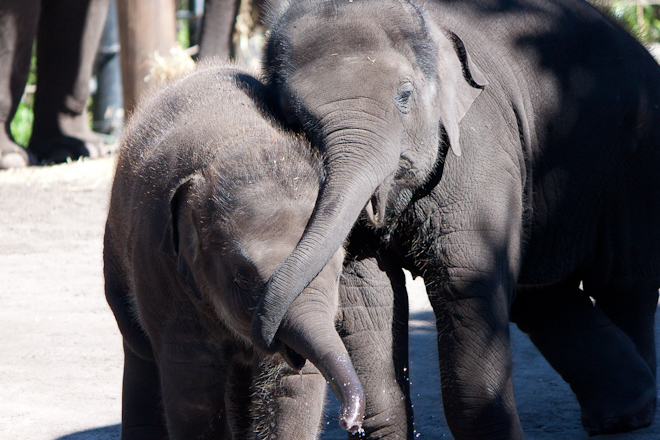 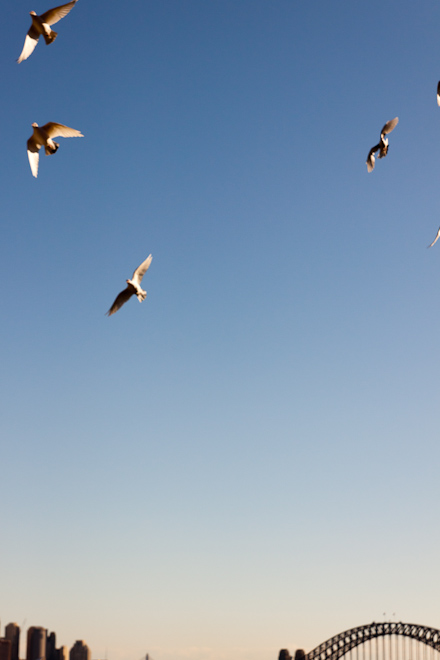 This morning I woke from a dream. I was walking the streets of coro valley early in the morning, the first light of the day coming through the trees. I was going from house to house, walking up driveways to leave easter eggs on people's lawns. The eggs said "bradism.com" on them. Kevin Garnett was helping me. I think because he reminds me of dark chocolate almonds. Happy Easter. 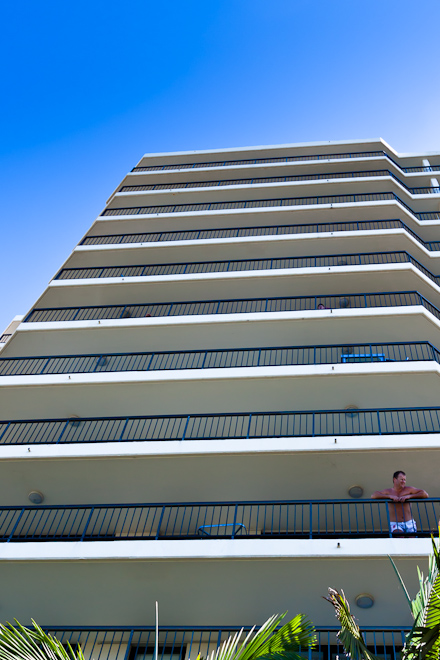 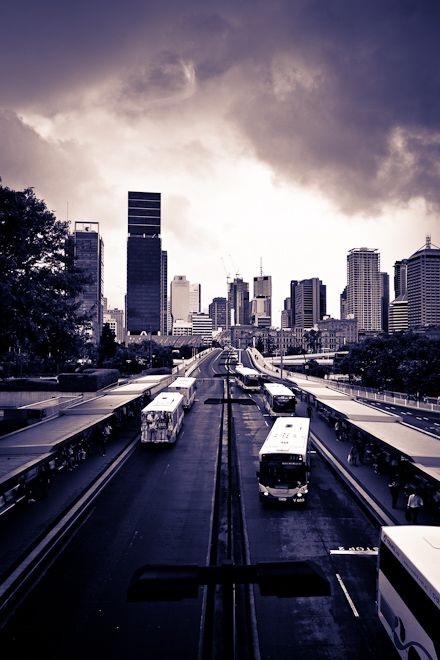 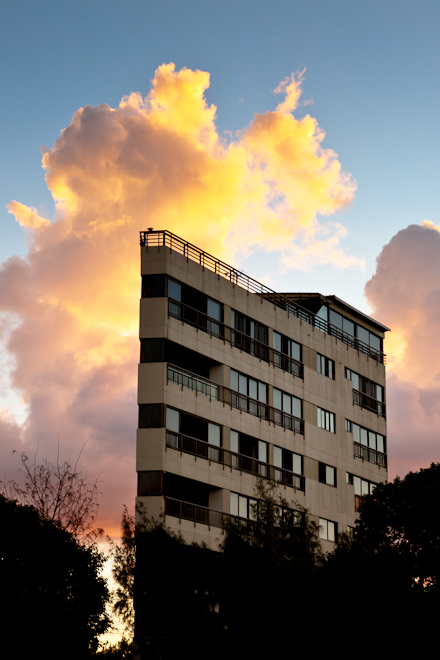 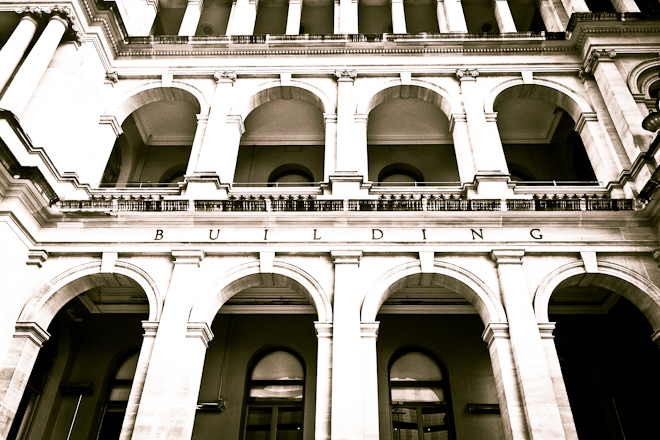 'Do you like anything about this job?' Dale asked.
'Hmmmm.' I said. And for fifteen billable minutes I considered his question.

'My favourite thing about this job is that my salary is based on contingency.'
'Contingency?' asked Dale.
'You know as well as I do that almost everything I do requires no specific skill. Sure, it does take some talent to handball the assigned tasks I get emailed to other team members the amount I do, but for the most part my job is to follow the client or the support ticket's precise instructions and give someone a ring when I'm done. A well designed Perl script could probably do what I do. Worse, possibly even a call centre drone in Mumbai!'
Dale nodded.
'However, the reason I'm still cashing a weekly pay-check more than what nurses and police officers and the school teachers who educate this country's children do is because there's a risk - however small - that someday, something will go wrong with the system and I will be the only employed person who can fix it. There's an extensive chain of managers starting with our boss that you can trace all the way to corporate headquarters, and not one of them would even know how to log on to the remote server when our client calls to report their application is displaying an error. So, instead of paying me based on some tangible target they pay me to sit around waiting for that error. And when it happens I will fix it and explain in readable English to management on both sides why it occurred and reassure them it probably won't happen again.'
'That's your favourite thing?' asked Dale.
'It's the good thing. Before I worked here - when I was studying - I used to work at Subway in the city. Did you know that every employee at Subway has a documented "sandwich rate"? I had a rating of 1.2, meaning that in an hour I could make seventy-two sandwiches. I was paid just over eleven dollars an hour. Do you know what that means?'
'No.' Dale's chair was undisguisably rotated, his feet pointing into my cubicle.
'It means every time I spent a dollar I would know I made six and a half sandwiches to earn that dollar; more than that, really, taking into consideration tax, opportunity cost and every other factor, none of which improve the statistic. Whenever I bought a beer I would think that I had constructed forty sandwiches to earn it. When I bought a condom from the vending machine in the toilets I couldn't avoid thinking I'd made thirteen sandwiches in exchange. I had to make five thousand, one-hundred and fifty-five sandwiches to register my self-destructing Ford Focus for twelve months, and another four hundred and twenty-five sandwiches every time I filled it with petrol. Every time I bought a sandwich... well, it was very cheap because back then Subway staff could get any footlong sandwich for the price of a six inch salad sub. Other than that though every dollar I spent would conjure a parade of sandwiches through my mind.'
'Wow,' said Dale. 'Sounds tough..'
'It completely depressed me.' I said. 'I quit after four days. I am much happier with this current arrangement.'
'OK, but, how do they know?' asked Dale. 'What proof is there that you will be able to fix a problem with the system when it goes down?'
'I do actually have a degree in Computer Science, Dale. You know, a recognised qualification that you gained by demonstrating how to fix problems when systems go down? And I have ten years' experience in this industry. Don't you at least have a degree?'
'I'm definitely qualified enough to confidently state that I don't really understand the system' said Dale.
'Ah, well...' I pondered. 'In that case the plan is simple: book a day of leave every week and keep taking time off until the system has a major outage on a day that you're away. After that Attribution Theory will tell every manager and service delivery administrator that your presence equals a running system.'
'That works?' asked Dale.
'It should do. It did ten years ago.'