I did a lot of programming today. Who would have thought that slowly reading aloud to myself a 500 page book called PHP Objects, Patterns and Practice written by someone much smarter than me would have helped me finally get a grasp of some of the more intricate conundrums of writing multi-tier web applications. The current project I'm working on for my portfolio has four tiers! FOUR TIERS! To put that in perspective, Bradism has only one tier, if that. It's almost more like a mezzanine; a six year old testament to taking your "Hello World" script and just running with it.

The main drawback about learning and writing code for a four tier web application is that you can do a lot of programming in a day and have very little on the interface to show for it. Indeed, for most of today I have been adding and changing code and then refreshing localhost hoping not to see it change! And everytime it doesn't I feel a little more excited. It's a giddy rush that fixing some of the outstanding bugs in the new version of this site cannot replicate even if you added a replication package to the data tier of my life.

OK, so obviously that wasn't very thrilling, so here's a photo I took of a tiger drinking some milk: 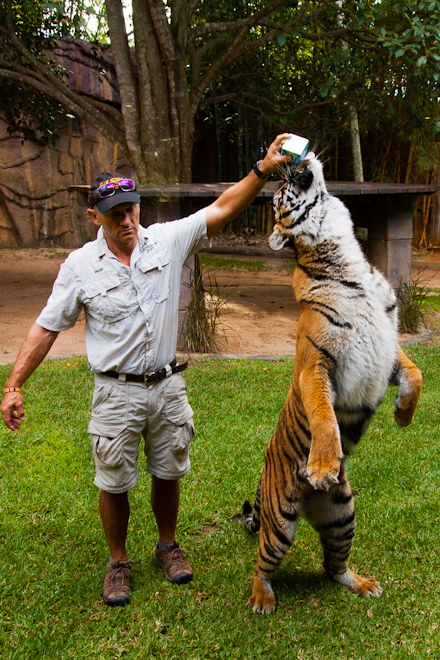 In this photo I am the Tiger and PHP Objects and Patterns is the milk carton and the bored looking zoo keeper is possibly you.

ANZAC Day is long gone and I have now been unwittingly shoved into the third of the year in which I wear socks to bed. To make things worse, this is the first winter I'm ever going to spend in a non-brick house. This year my walls are made of something unrecognisable: plywood perhaps, or possibly the same stuff the walls of the fridge are made of. On top of all that Sydney has been hit by an early cold snap with winds that - according to Weatherzone - are coming straight from Antarctica! That website also reckoned my nearest weather station, Holsworthy, recorded below zero this past Wednesday. A day that shall henceforth be known as 'Antarctica Day'. I tried going for a walk at lunch that morning to buy some food from Woolworths and it basically ended up like 8 Below.

While I have been handling the cold in traditional ways: heaters, hot drinks, whining about it to whoever will listen - such an extreme jolt of coldness has caught me unprepared and I've been forced to also discover some non-traditional methods of keeping warm. And now I'm now going to post them here with a homage to Men's Health articles with weak puns for sub-headings.

Non-Traditional Ways to Keep Warm
The Extremities
I don't yet have any recommendations for making those pants-down visits to the bathroom more appealing in the chilly months. However, when it comes to washing your hands afterwards modern science now provides a way to prevent the biting cold that infests your fingers when you have wet hands on a winter's day. Instead of drenching your fingers in icy water - or standing around waiting for the inefficient hot water system to warm it up - simply use hand sanitizer and rub in until dry. This method kills germs without making it challenging to use your keyboard for the next ten minutes.

Keep Moving
Sometimes the first reflex on a frosty day is to drape as many layers of clothing and covers over your body and limit movement to anything that doesn't require your hands or feet to emerge from the containment of a blanket. This is actually counter-intuitive, as it is moving around that boosts circulation of blood throughout the body. Depending on your level of fitness simply performing a set of bodyweight squats or running up and down a set of steps will provide a burst of warmth. Performing any type of exercise while insulating your feet with slippers will also increase the duration of heat that the exercise provides. And if you go for a really long run you can usually get away with wearing a t-shirt for an hour afterwards.

Central Heating
The human body seems to have the subconscious knowledge that eating large, hot meals is a good idea on cold days. Before giving in to this instinct it's important to remember that this is an idea being sold by the mesencephalon, the same portion of the brain that recommends consuming extra calories that can be stored for energy as fat in case of famine. The solution to this dilemma is simple: Dieters sometimes reduce their appetite at meal times by drinking several glasses of water before eating, making themselves feel fuller. This technique can be extended. By drinking one to two litres of hot water you can fill your belly with radiating warmth for no calorie cost. Smaller volumes of water are less effective due to the rule of heat transfer, so I recommend heating a saucepan of water and drinking it shortly after it boils. Soup could work too, I guess.

Use Your Head
Science has shown that humans lose almost half their body-heat through the head... assuming they are wearing footwear, pants and a jacket at the time of measurement. Assuming you are wearing footwear, pants and a jacket you can still trap in even more body-heat by listening to music on headphones which cover your ears. Studies have also shown the louder you listen to music the warmer your ears will be. Although, if you want to avoid tinnitus you could just listen to quieter music on headphones that have been stitched into earmuffs.

Along the same line, growing a beard will also keep you warmer. Even if you can't grow a beard a thin layer of stubble is also ok (it's ok for keeping you warm, and it's ok just in general.) Most snow dwelling civilizations grew beards: the Norse, Scots... It's like a sweater for your face. Facial hair is also helpful to keep you looking manly in case you decide to apply more traditional heating methods that are harder to pass off in suburbs where Utes seem to outnumber people. Peppery stubble helps complement accessories like scarves and the purple men's hoody from a clearance section at DFO that is so warm and comfortable that you can't work out why it was discounted so much. Even if you're old and your hair has gone grey, a sleek, white coat will keep you warm and can also camouflage you against the snow to help protect you from predatory birds like bald eagles and snowy owls.

I've had quite a few keyrings over my life so far. There's usually been a queue and - during my high school years - there has been a rotation too. So it was a little strange a month ago to notice that I had no keyring. I think the last one to be on there was a Western Bulldogs one but I haven't seen that one since September. My keys now said nothing about my personality except that I drove an Australian car.
Then Chow went to Europe and made it a competition to guess how many kilos he would gain while he was over there. I won, and yesterday in the mail I found this: 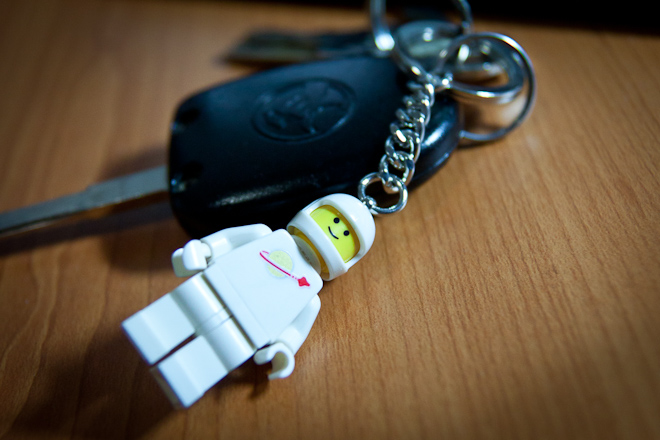 Thanks Chow. Now the people at airport parking will have an insight into what makes me Brad.

It must be Autumn because the fruit bowl looks like this. 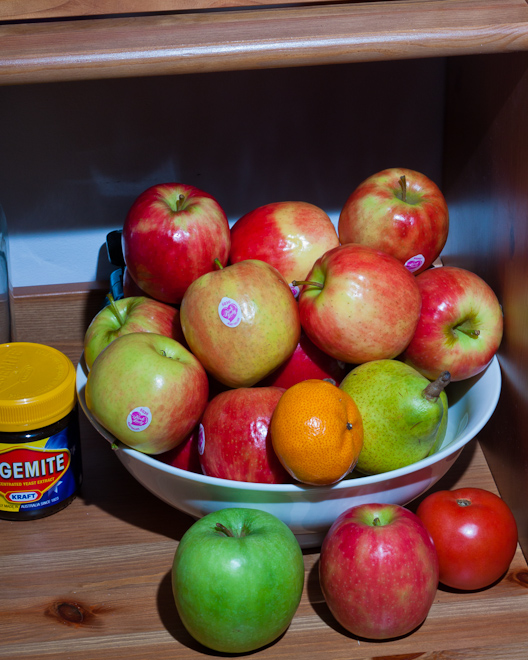 The season that it is did not become apparent to me until my trip last weekend to the Adelaide hills. An early morning train ride from Belair to Adelaide, overseen by golden sunlight, revealed to me both vibrantly painted trees and the realisation that there’s perhaps not a single train station on that train-line that didn’t embed some anchor into my youth.

I did notice that summer was over before landing in Adelaide, but I’d just assumed it was winter.

Arriving back home and reflecting on this experience reminded me that I hadn’t yet burned my Autumn Mixtape. An annual tradition for me since 2003 – the year Chow lent me one of those "cassette" plugin gizmos that let me play my discman through the tape deck of my VK Commodore – I’d actually compiled a library of songs for 2011’s CD a month or so ago but never got around to burning it. I finalised the tracklist this afternoon, burnt it, and then took two dozen photos of a bowl of apples. And seeing that the list of things I like to bang on about on the internet is essentially topped by "2. My thoughts on music" and "1. Myself" I am going to talk about my newest mixtape now:

I am a man of many mixtapes which I use to celebrate many occasions, but Autumn has always stood out as the most significant. Perhaps because Autumn is the first full season of the calendar year, and the time of year when my enthusiasm for contemporary music is at its highest. So by April I am usually high on superiority with my knowledge of the year’s early leaks and coming release dates and holding the hand of that year’s musical royalty. It is also that season of the year when summer-fun experiences are fresh, but the gloom of winter prevails. The song choices this leads to are usually stirring and melodramatic.

My Autumn mixtapes have varied in their quality, the best probably being 2007’s "New Life" mixtape which I posted on DJ Bradism’s MySpace at the time. Or the 2003 effort which had the advantage of being the first and therefore access to my entire mp3 library at the time (as well as being influenced by Woolworths radio). 2011 is probably middle of the road, but it will remind me forever of things like The Dallas Maverick’s Playoff Run, Half Life 2, Seth Rogen, Living in Sydney, buying lots of pedestal fans, watching Pulp Fiction for the first time, and, of course, all the major things in my life that aren’t represented by specific songs but that will flash into my head in vivid panoramic visions when I listen to this CD a year or more from now.

Did I mention I spent the last week with previous Autumn mixtape CDs in my car stereo?

The 2011 tracklist is also included here: