I clean the bathroom irregularly. Afterwards, every single time, I scare the bejesus out of myself when I see my reflection in the mirror when I turn the light on to pee.

Earlier this week I was leaving a crowded train at North Sydney and in the exertion of lifting my backpack onto my shoulders I accidentally farted. Loudly. I had to stand for over a minute, waiting for the doors to open and pretending I hadn't just dropped a bomb on a crowd of people. I struggled to resist the urge to laugh. As I walked away from the station and reflected on getting away with my incidental deviance a smoker blew a lungful of second-hand smoke into my face and I felt like justice had just been served.

Two days ago I wrote myself a note that simply said "mirror fart skyscraper" and I cannot for the life of me remember what skyscraper was supposed to remind me of.

All of that plus moving, job changes, biomechanics, unpublished writing and selling stuff on gumtree.

This Week I Booked a Moving 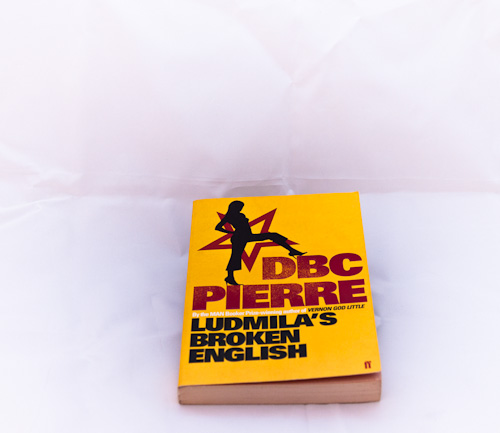 I've bought a lot of books that I know I'm never going to read again. Like shirts, I keep them in my house because they remind me of past times. Also like shirts, a lot of them remind me of lunch breaks in Adelaide. I bought this book from O'Connell's Bookshop. 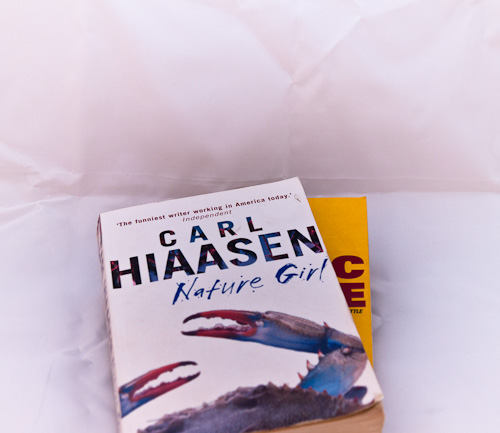 In the past twelve months I've actually reinvigorated my relationship with public libraries. That didn't stop me from buying this book from a bookshop in Canberra in February. 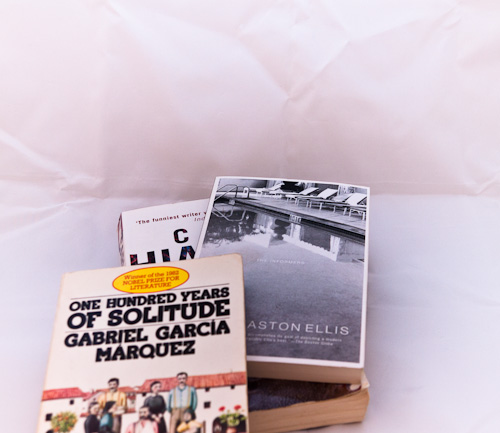 Some of the books I'm holding onto I keep because they're classics, even though reading them was a struggle. 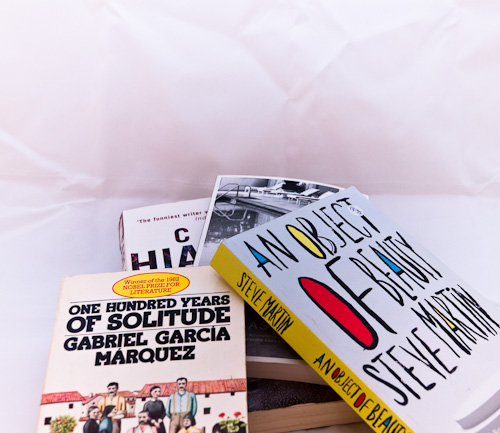 Others I bought because they were written by people who inspire me, even if it's not their best work. Or maybe I buy them because I realise at 5pm on a Sunday in Cronulla that all I've achieved in a weekend is drive to Cronulla.. 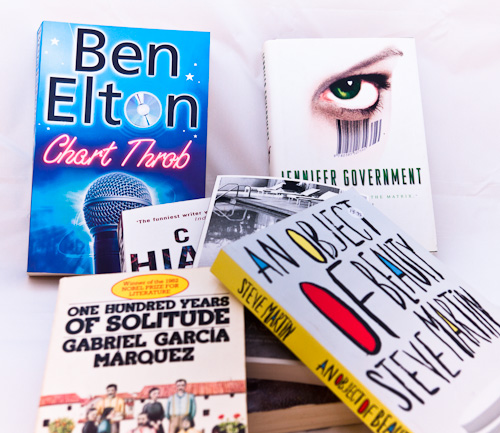 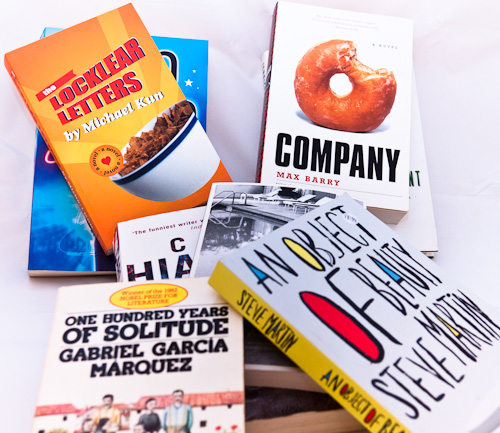 Sometimes I bought books that I thought would inspire me, but turned out to be average. I don't know why I would keep books like that. This happens with IRL purchases and internet shopping. 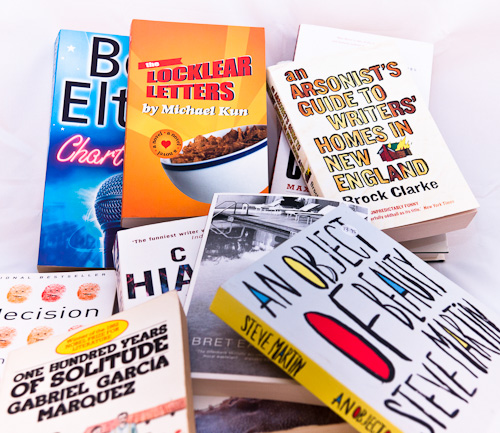 Sometimes the books are good, but no longer seem relative. 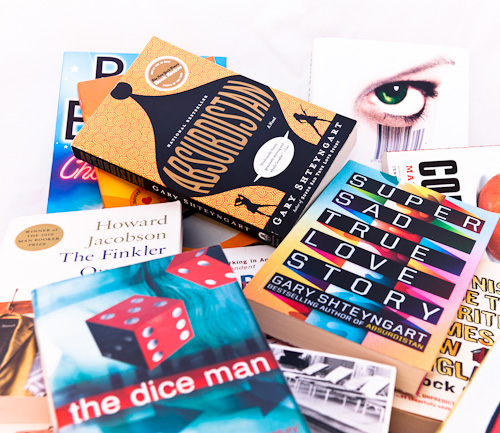 Sometimes I buy bad books and keep them on my bookshelf because I don't want to admit that I made a mistake. 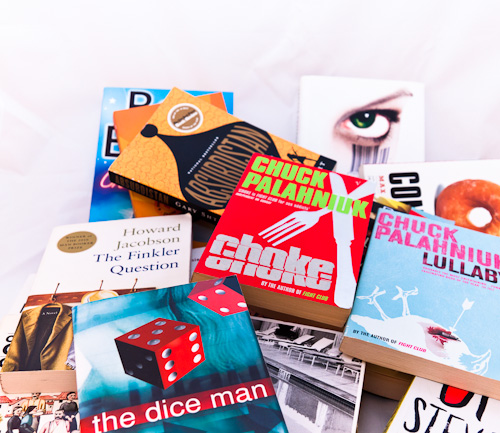 Sometimes I buy books for a combination of all the previous reasons specified: they might improve my writing, I'm in Melbourne, they're . Wait, that's shirts.. 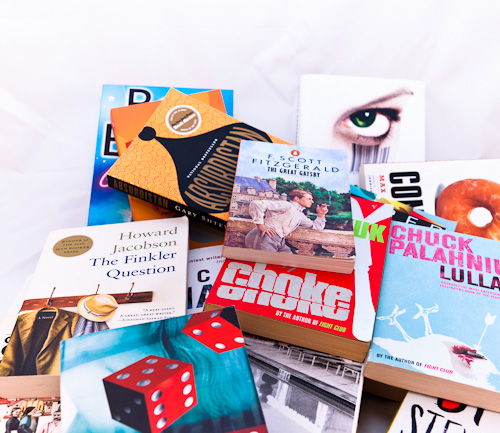 Sometimes I read the classics because Borders is liquidating. And because I like the idea of napping in the sunlight. 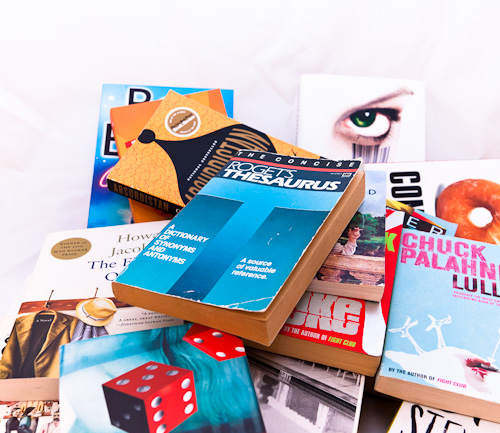 Sometimes I hold onto books because the nostalgia associated with something you borrowed forever from your Year Five teacher is too strong. Then, you convince yourself that eighteen years from now you'll feel the same feeling in your guts about thesaurus.com.

At some point in the last week it was officially ten years since I last went to a class in high school. I think it was Thursday, my maths isn't that great anymore.

Because high school is the thing that most people in Australia "do" in between their first pubes and their first car incident, I would say it tends to have a lasting impact on the next decade of most lives. I never really liked high school. I had fun, but I always felt like I didn't really fit in with most of what was going on. Thus, I was never sure if I would attend a ten year reunion if one was ever organised. Now that a decade has passed, and either no reunion was organised or I wasn't invited to one that was, I decided to host my own, independent reunion with a few choice ingredients that would transport my mind back to November 1, 2002. They were: A burnt copy of Ministry of Sounds' Dance Nation 2002, a copy of the 2002 Cambium magazine, and a can of Woodstock Bourbon. For an hour tonight I saw, heard, tasted and smelt the senses of 2002. 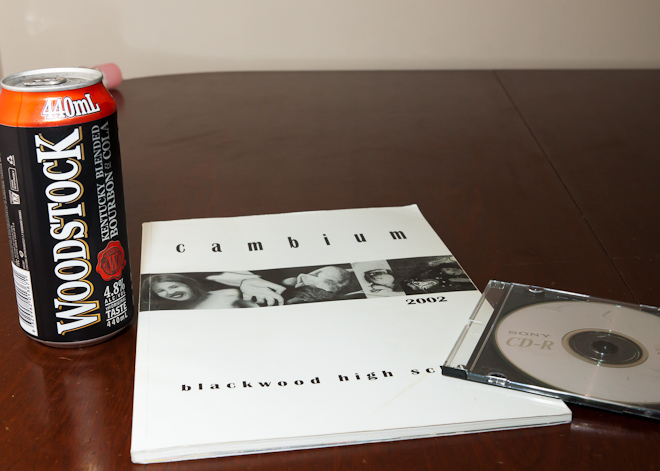 As I finished the sickly-sweet Woodstock I opened up the Cambium to the Year 12 portraits and looked for people I could recognise. I held the pages open in front of my face and tried my best to say what I felt I would have said if I was actually reuniting with them.
It went like this, "Hello... name-of-person-in-photograph... how are you...? I don't have much to say to you... This is awkward..."

This is how I think my attendance at a ten year reunion really would have gone. I guess I just saved myself from buying a plane-ticket, money I most definitely won't be spending on more Woodstocks. The rest of the conversations I had were along the lines of "Wow, you look like a ten year old" and a couple of "Jesus, your eyes are really close together", but mostly it was "I'm not sure who you are... Did I know you?" The only actual case of repertoire that developed was in the conversation I had with the photo I found of myself, which I think summarises the nature of this entry quite well.

After I'd skimmed through the Cambium I turned to my old writings from 2000-2002 for further reuniting with the past. It provided many chuckles and prompted many memories. Such as:

[In English class] I was showing Willy, Ben and Andrew that I could fit a five cent coin up my nose. It got stuck up there and I was desperately trying to get it out when Ashley yells "Brad's pickin' his nose!" and everyone stares at me. "No I'm not," I say and with a hefty snort I send the coin flying out and rebounding off the desk while Mr. Skehan looks on in horror.

It's so fascinating to find these hints of the man I'd become today.

Next weekend we’re moving house and I've been helping pack by doing the following things:

Taking photos of things that I'm going to throw away
Eating cereal three times a day so that “there’s less cereal to move”
Discovering bouncy balls and bouncing them
injuring myself and resting
Reminiscing about all the short stories I wrote on the deck and never published
Dealing with call centres
Playing music loudly while I'm not engulfed in neighbours.
Selling things on Gumtree
Eating frozen cake
Writing journal entries about moving.

I would make a bad robot

I was thinking about drinking green tea in lieu of a coffee the other day. I don't like the taste of green tea, but I was on a training course that had no availability of decent, free coffee and I have been trying to wean myself off coffee without much success lately.
I thought to myself, "I could make up a drink that's mostly coffee and a little of green tea. I could do this each day, gradually increasing the amount of green tea as I decreased the amount of coffee. Soon I would become used to the taste of green tea and would no longer be concerned with the lack of coffee."

After work today I was out on the deck assembling our outdoor table. I love decks, and I love sitting at a table on a deck even more. Drinking a beer, watching birds, scrambling with friends in the sun. I can't get enough deck.

Importantly, unlike every other deck I've sat on, today's deck is 19 stories above the ground. When I watch the birds on it, I'm looking down. That happened tonight, a score of sparrow-like birds were flitting about below me, doing loops and surfing the winds. I watched them for a few minutes and thought, this is all these birds do with their time? Fly around doing a barrel roll? After evolving to master flight?

Then I thought of all the evolved humans currently sitting on the couch watching television instead of flying around doing tricks. If I could fly, I would flit about aimlessly too. Then I got bored, went inside and watched television. 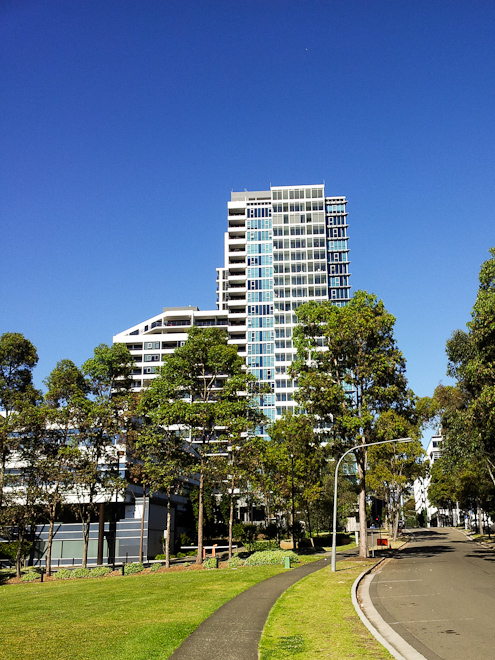 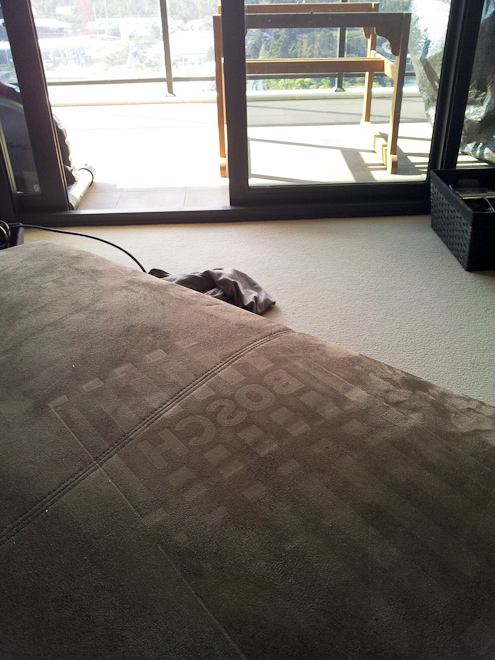 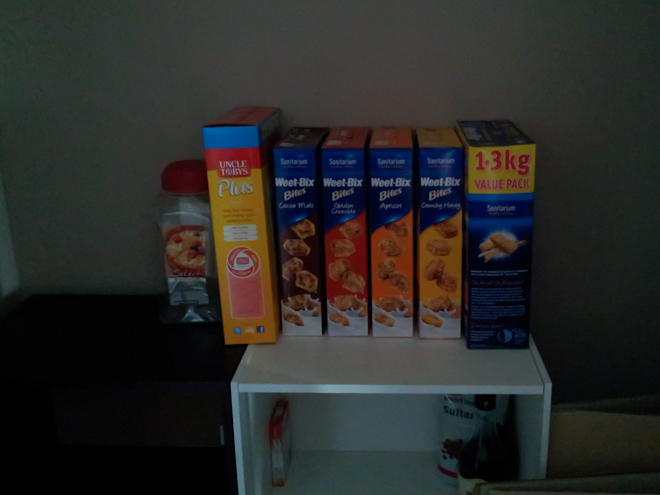 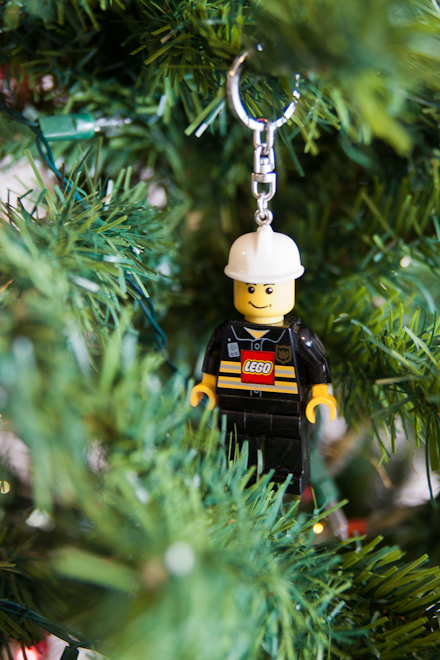 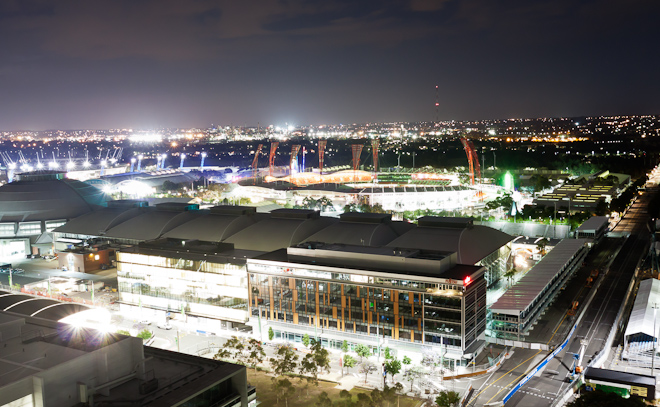 Every time I eat an apricot it feels like I'm eating a tiny butt.