Is there a fixed amount of time you can have an item of food before you become sentimental and have problems eating it? At some point does your brain switch from "I could use those calories to fuel my cells" to "my comfort with this environment would decrease if this bottle of iced coffee mix wasn't on the bench anymore."

I thought about this concept while preparing dinner tonight. I was heating a lamb Rogan Josh that I cooked, portioned and froze sixteen days ago. My bulk meals don't usually last me this long. This particular portion was the last of the batch, and I had eighteen minutes of microwaving time to reflect on the curious sense of sadness I felt about eating it.

I'm not talking about getting emotional about things like that box of Weet Bix sitting in the back of your pantry, or other long life tins that you can hold onto for six months and then throw into a pasta without a second thought. I think for this affection effect to happen that the item in question needs to be unique in some way, and also be exposed within the environment.

One Christmas I was given a chocolate Santa Claus made by a luxury chocolate manufacturer. It was on Christmas day and I certainly wasn't lacking for sustenance at that point of the afternoon, so I positioned it on my desk among other knick-knacks to eat another time. The next September, when I was moving home, I realised I was still yet to eat it. It seemed that at some point I had unconsciously decided the cost of eating it was too damaging to the tiny contribution the chocolate statue had on the familiarity of my environment. Reflecting further I realised this same phenomena might have been the reason I never baked my Thomas the Tank Engine muffin mix which sat on my desk for about 18 months before I threw it away. I did eat that Santa, it did not taste fresh.

Upon further reflection, I also held onto a six-pack of fat stubbied Cooper's Sparkling for six years after they changed their design to a slimmer bottle. When I drank them in 2009 they also did not taste fresh.

I think environmental familiarity is a major factor in human being's comfort levels. I have seen enough office spazz outs over disappearing mugs to realise this. And also, Luke Walton. There's probably some influence from your food-poisoning-preventing sub-conscious that poses a barrier to eating food your brain recognises as old as well. Whatever timeframe is needed to fall in love with food, it's longer than sixteen days, because my dinner was delicious, and microwaving things for eighteen minutes on the lowest heat makes everything taste fresh. 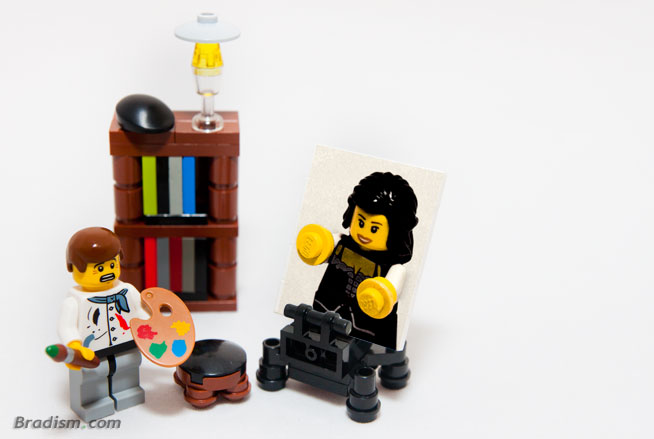 Whenever I make a curry with a jar of curry sauce I do the same thing: After I tip in the sauce I add a little bit of water to the jar, shake it up with the lid on and then tip the now flavoured water into curry.

Working with curry paste, like tonight, this doesn't work so well because the paste needs to stay thick and simmer. There's no scope to add water. This problem always frustrated both my strong flavour loving side, and my frugal side. Tonight I solved the problem by putting in cubed up chicken into the empty paste jar, shaking it vigorously and then tipping the instantly-marinated chicken chunks into the simmering paste.

The last remnants of paste were successfully added to the curry and the chicken tasted nice.

A Nice Hill With Great Views

The secret of good photography, more useful than leading lines, or the rule of thirds, is to take a boring photo and put a pretty girl in it. 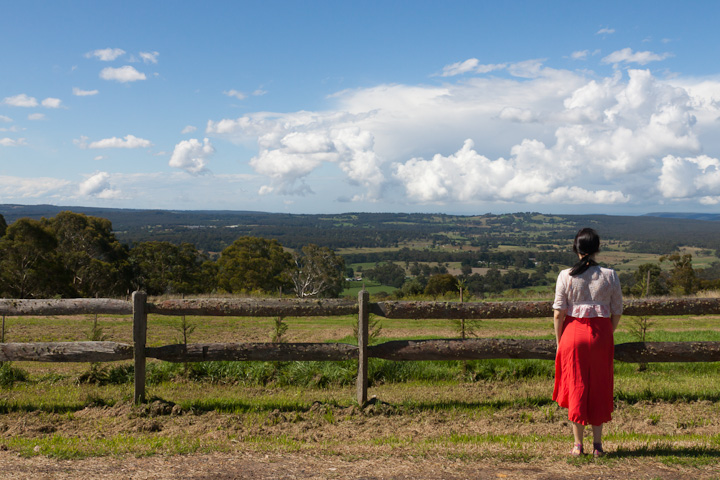 Unsurprisingly it is very large, and storage friendly. I was impressed with the level of detail in the instructions, the extra features (wall mount, device to hang plastic guitars from.) It was also a very reasonable price compared to competitors. I rate this experience as positive. I just have to work out what to do with the other three TV cabinets.

For almost four years I've tried to convince Vanessa that cricket is an entertaining sport to watch. She is proving hard to sway. Lucky for me she went out tonight and I had an evening to myself to enjoy the limited overs clash between Australia and Sri Lanka.

Cricket is not traditionally a sport which delivers instant gratification. I see cricket more like an excellent novel, rather than blockbuster movie. By saying that I don't mean that each test match is like a novel. A test match is like a chapter. I might even go as far as to say that an entire tour or series is just a chapter in the novel which is cricket.

Much like literature, cricket is full of characters that develop over time. Characters does not necessarily refer to their personalities, because who really knows what goes on in a lot of their heads (in the case of Mitchell Johnson I would say "not much".) Sadly to say that, as with the rest of humanity, the majority of them are probably dickheads. The characteristics I'm talking about are, for some examples: Glen McGrath's perfection of line and length over his career combined with his approach to batting at number 11. Michael Bevan's successes (and failures) in high pressure run chases. Steve Waugh scoring "Fuck You" centuries everytime it looked like he was close to being stood down, followed later by Ricky Ponting's "Fuck You" centuries anytime a team dared to make him look out of form. Gilchrist's reinvention of the wicket-keeper batsmen. These are just some examples, all Australian. There are eight international teams full of their own characters. Plus perennial underdog teams with their own stories. Nasser Hussain, Dan Vettori, Shane Bond, Murali, Damien Martyn, Lara, Dravid, Afridi, Sehwag, Graeme Smith and Ashwell Prince. Some careers developed, twist and turn, seem to die and then pop up five years later - just like real novels. In each new chapter new characters are introduced and regularly characters new and old are killed off. Epic battles are fought. Captains go head to head, the winner's tactics are fascinating, the loser forced to improve or be killed off and become a commentator.

Cricket's not just two dozen intertwined storylines at a time. Sometimes Tait will sling an unplayable inswinging yorker and the sight of a cart-wheeling stump will be instantly gratifying, sometimes Lehmann will loft a cover drive straight into the Adelaide Oval fence and you'll think "yeah, that's nice." Sometimes Inzamam Ul-Haq will try and get back into his crease and cartwheel his plump body over the stumps and that's funny. Those things are great. Cricket's about more than that though, it's about a whole world to escape to. Sure, just like a novel there are going to be periods equivalent to the author doing nothing but describing scenery for pages, but invest enough time and you'll see what makes cricket one of the world's greatest sports.

I've decided this explanation for how superb cricket is surely convincing. However I'm still having issues working out how to clarify all these points for Vanessa. Everytime I think I've worked out a way to outline the benefits of cricket and how entertaining it is if you watch enough of it, another voice in my head says to me "but Brad, this might be the reason why you think it's a good idea to write novels about working in an office."

This Summer has brought 400mls of rain, in between days of warm sunshine and greenhouse like humidity. When I lie in bed early in the morning I can fucking hear the lawn photosynthesizing. This bothers me, because I have to mow it, and I hate mowing. I mowed for two hours today and I scowled at every plant I passed.

The five day forecast is for up to 110mls of rain and a mean daily maximum of 27 degrees. That's terrifying. You can actually see the grass growing in the hours after a storm, thickening and creeping further and further up the back stairs.

I am never going to use the phrase "like watching grass grow" to describe something boring again. From now on it will mean "horrifying". Someone will be, like, "Brad, did you see one of the Western Bulldogs dislocate both his knees in the first quarter of Saturday's game?" and I will reply, "I did, I saw the super slow-motion replay and you can see the bulge of the tendons as they lose grip of the knee cap. It was horrifying. It was like watching grass grow."