A few weeks ago I was thinking about an appropriately awesome way to celebrate my 1300th Bradism.com entry. Around the same time Vanessa had recently purchased some old school, flat topped pink shower caps which she left in the bathroom. Two inclinations became one and I decided I wanted to take a photo of myself in the shower with a pink shower cap and post it on the internet as my 1300th entry.

This did not go well. First, the bathroom is very dark and I was trying to wrap my head around how best to light it. I also wanted to invest in a long wooden brush that I could coat with soap bubbles and pose with. I planned it to be a tasteful shot, the bottom of the frame cut just below my belly button so that children too could enjoy my artistic endeavour. On my face would be a cheeky smile surrounded by perfectly timed stubble, and bubbles would be floating through the air. I was going to overexpose the background a tad to try and make the shower tiles look a little less dirty.

Long bathing brushes are hard to find, though, and I was further put off when I discovered my head was too big for the ladies shower cap I'd planned to wear. The project never found any traction and before I knew it I wasn't even spending my lunch breaks in homewares departments any more. After a couple more weeks went by I accepted that I was never going to take this photo. Unfortunately, I had never published any journal entries in the meantime. And after almost a month suddenly I couldn't think of anything to post on my journal except a picture of me in the shower with a pink head cap and a giant, soapy brush. I didn't know what to do. Eventually I decided if I described the picture and posted that description it might unclog the backlog of creativity that was somewhere deep in my off-camera pipes.

I don't remember the first CD I ever bought with my own money. I think it was maybe Everclear's So Much for the Afterglow. I do know what it should have been, Electriclarryland. When I used to care more about music I was always irked by the fact that I couldn't point to Butthole Surfers as proof of me having above average musical tastes from the very beginning. Sure, they were no Wolf Parade, but they were better than Everclear and I think that liking them as a pre-teen would have impressed street press readers.

The reason I remember my original first CD plans is because I was actually very excited to be buying my first CD with my own money, and my brain was memorising things all over the place. My parents took me to the Myer Centre and I browsed through the racks to find it. I think I really enjoyed the song Pepper at the time. Also as a twelve year old the name Butthole Surfers was pretty funny. I think my parents thought I was after a comedy album and not the 50 minutes of alt rock psychedelia I could have had on that disc I found under "B" at the Virgin Music Megastore.

The reason I did not buy Electriclarryland is actually kind of funny. It was $30. I was prepared for this. Somewhere before arriving at the cash register, however, I discovered the same exact album on cassette was only $21.95. It was the same music, but I would save $8 which in 1996 money was actually closer to TWELVE DOLLARS in today's money. I believe this is the first documented event of me being a tightass.

In hindsight, the choice probably made sense as I didn't even own a CD player at the time and I did own a Walkman. Mum bought me a CD player in 1997 and I played Everclear on it a lot. In the years that followed I would have no hesitation in describing my musical tastes as "the same or similar to the band Everclear." If I had owned Electriclarryland on CD instead of tape would I have listened to it more? Would I have gone down an entirely different, life defining path in musical tastes? Could I have been more artistic, more philosophical? More abstract?

If I had bought the CD instead of the cassette, would I have gone down a totally different, life redefining path of not being stingy and currently be swamped with credit card debt and have no health insurance? Maybe.

I don't know what I did with that $8 I saved. I'm pretty sure I still have it.

The rain stopped and then it was cold. This really is the most inconsiderate state. I found my slippers under the bed and the moment I slipped them on I remembered I'd spent all last winter procrastinating about buying new slippers. Despite all their holes and tears they're still warm. I think that my feet feeling warm when I put them on is just a conditioned response at this point.

Sometimes I think that nostalgia is just a different flavour of guilt that humans feel when they are reminded of a period in time where they didn't have to focus on survival.

I was looking closely at the inside of our dishwasher to try and calculate the necessary clearance for some glasses. While I was looking for the roof mounted sprinkler I realised our current model doesn't have one, just a silicone fixture I'd never scrutinised before. I realised I could unscrew it and immediately regretted it. Inside was a grey, pasty matter that made me want to immediately drive to the 24 hour K-Mart and buy all new crockery and dinner sets. How are you supposed to learn about these perils and pitfalls in life? If I was a God, all powerful and omnipotent, I would totally dedicate time each week to familiarising new renters with the obscure quirks of their inherited large appliances.

One of the advantages of maintaining the same journal for the past eight years is that I haven't had to write an introduction for almost eight years.

And I think that I will just let this journal define itself over time. A long time.

Here's the pillow we slept on together last night. 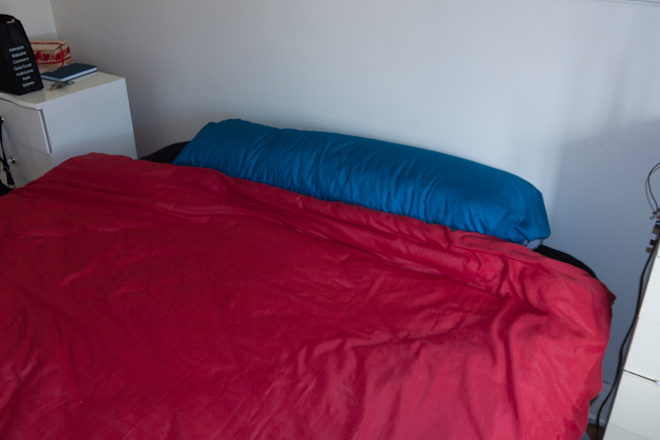