1. Alt-J - An Awesome Wave
Just pleasing all around. Nothing really stood out as number one, the top 6 are all about par for me.

3. Miike Snow - Happy To You
Two of the best songs of the year, Paddling Out and Bavarian, the rest of the album was solid as well.

4. Hot Chip - In Our Heads
I like the love theme on this one.

6. Purity Ring - Shrines
Lived up to the hype for me, some mesmerizing songs. Sounded like what female-voxed pop music would have been imagined as twenty years ago by David Bowie.

7. Killer Mike - R.A.P. Music
El-P's mental beats, Killer Mikes angry passion, good guests. A few average tracks but a really solid Hip-Hop album in most ways that you can use the word "solid".

8. The Big Pink - Future This
I reckon this one went a bit overlooked, some glammy, electro-rock tunes. Many were very catchy.

9. Grimes - Visions
Did not blow me away, but I never disliked having it on in the background.

10. fun. - Some Nights
I really liked The Format, and this obviously reminds me of them.

11. El-P - Cancer 4 Cure
I liked Sleep When You're Dead a lot more, but this was good stuff from El-P, but he sounds a bit more jaded now, rather than idealistic.

12. Bloc Party - Four
Was loud and catchy enough to be good.

16. Matt & Kim - Lightning
A strong, power-pop punch but aside from the first few tracks this one got old real quick.

18. Ramona Falls - Prophet
This was better than the Menomena album by far.

19. Santigold - Master of My Make-Believe
Santigold tried a few new things, most of it worked. She has a great voice.

21. Aesop Rock - Skelethon
Liked the lyrics but most of the beats felt flat.

22. Plaster - Let It All Out
This was fun! And from Montreal. I don't know why this is listed as House/Techno/Trance.

23. Quakers - Quakers
No doubt there is some filler on this 41 track album, but some excellent morsels in between.

24. Yeasayer - Fragrant World
A more introspective, slower follow up to Odd Blood, but had its moments.

It was 42 degrees in Sydney today. I think this was partly my doing, as last week I'd noticed Adelaide's typical heat wave and I'd reminisced with some nostalgia about my unairconditioned times in that city in those temperatures.

In Sydney, 42 degrees is a big event. Definitely important enough for the Sydney Morning Herald website to have a dynamic, interactive front page article that constantly updates with new stories about how hot it is. I hope that The Advertiser hasn't started doing this since I've been gone.

There's a lot of things being inflated beyond their proportions in the media these days. People who obviously saw the East Coast centric media whinging about the hot weather sent me messages to make sure I was alright. I don't remember anyone checking that I was okay in the middle of Adelaide's five day stretches of forty plus. There was nothing on the web in those heat wave to recommend not making a spicy curry. You just learned these things for yourself.

I enjoyed today's weather. As midnight closed in I sat on my balcony deck enjoying the warm night air, resisting the urge to drink a beer. It felt like Summer had finally arrived.

It's a cliché, but I have a good side. Aesthetically. Especially when my hair is short. From my left my most striking features are my square jawline, focussed yet mischievous eyes, a nose that is... vigilant... Spin me around 180 degrees and an explosion of a cowlick combined with a trio of distinctive moles changes my whole demeanour. My right eye swims in a sea of vacant skin, stripping my steely expression of confidence away and leaving a more startled, weary looking gaze. Like a kindergartener's drawing: No straight lines, curious design choices.

I've only really noticed this difference in sides recently. Currently my primary toilet is installed below a large mirror and, if there's one thing I do consistently in life, it is not look down while I'm urinating. What I've learned from having this mirror is that my face looks really good when I'm doing a wee. Especially when I'm looking at my good side. Staring back at me is a man who is confident, unworried by the task at hand. Ready for whatever life may throw at him. He's proud. He's smiling, coolly. He is in total control, but he's relaxed.

This is a slight over-share I guess, but if you could see me, you'd understand why I'm mentioning it. Every time I see this expression on my face I can only wonder: why isn't this my driver's license photo? My passport ID? My LinkedIn profile pic? Before me is the face of a man you'd trust, you'd hire. A man you'd believe in. A man you might die for.

And then I finish. I turn to my left to wash my hands and I'm confronted by my right side. My bad side, and then all that vanity disappears down the drain. 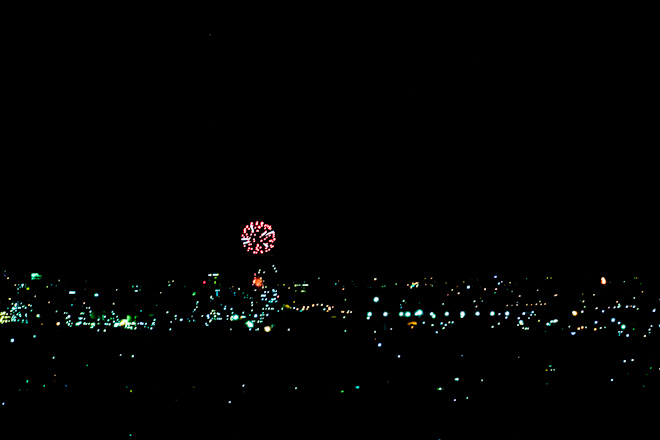 I flew into a sodden, gloomy Sydney yesterday afternoon as an ex-tropical cyclone lashed the city with ex-tropical holiday weather. Okay, alluding that my trip to Adelaide was a tropical holiday might be a reach - although I did see two different types of palm trees there - but there was nothing subtle about the weather that book-ended my vacation. It started with winds directly from the sun in Melbourne twelve days ago, and ended as described above.

The in-between bits were figuratively kaleidoscopic, featuring many many colours: blue courts, turquoise shorts, yellow shirts, red flags, green shoes, pink feet. So, when I had to choose my outfit for my first day back in the office I forewent subtlety and wore a plain, white business shirt.

Plain white is the most average of business shirt designs. No patterns, no checks, wearing it makes me an interchangeable cog in the white-collar work force. To complement the shirt I chose a pair of charcoal pants from my collection of trousers. I always encode my feelings and emotions about the day in the colour of pants that I wear. Charcoal means I'm feeling optimistic. Silver means I'm confident. Light black is for when I'm feeling expectant, peppercorn is for days I'm jaunty. I wear steel when I'm particularly self-assured, ash when I'm feeling fanciful, and I wear my slate pants when all my other trousers are in the wash.

Work went fine, I didn't get rained on much, I bought two things of yoghurt, and exhibited self-control around the coffee machine. Unfortunately after skimming through 500 emails there wasn't a lot to distract me, and I was in that situation where you can still remember all the things that your time would better be spent doing.

I was walking towards the kitchen at one point and I heard a clattering. Instantly I recognised it as the sound of muesli being spilled into a hard, plastic bowl and after rounding the corner I proved to myself that my harmony with cereal is as sharp as it was before my trip. And then I realised that a white shirt is technically every single colour at once!

Before I met Vanessa I thought the primary purpose of tennis balls was to make backyard cricket more accessible and less destructive.. 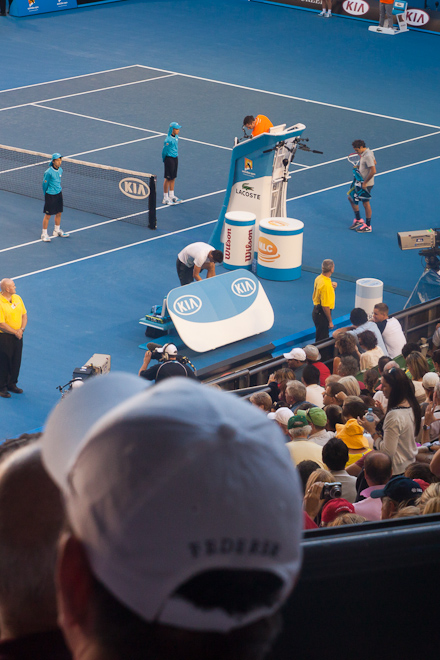 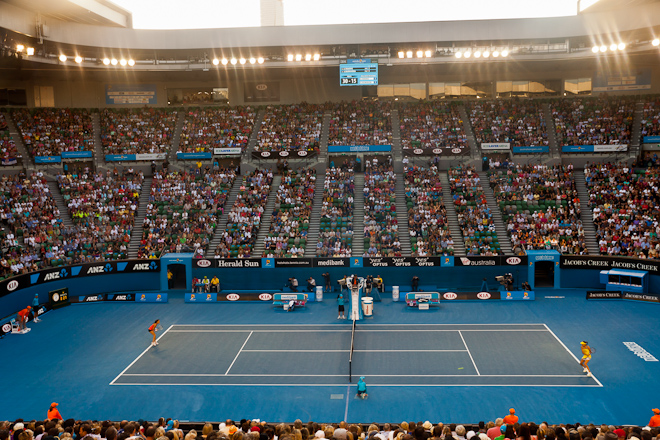 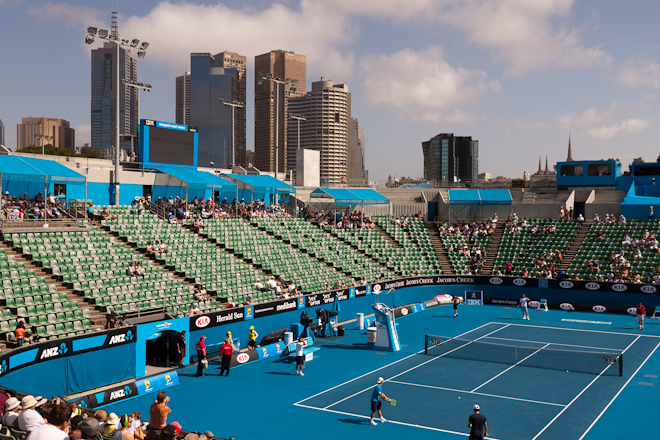 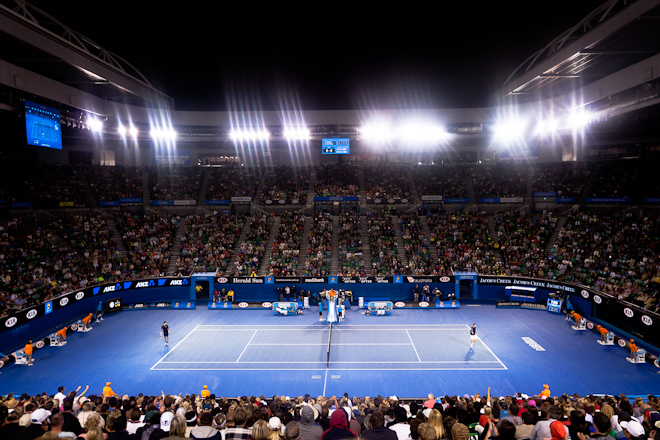 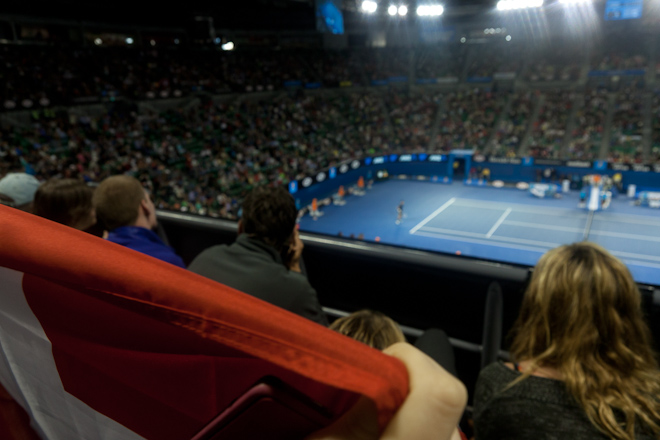 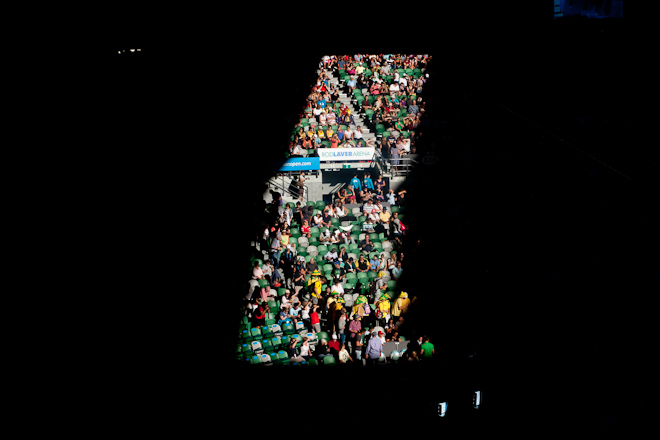 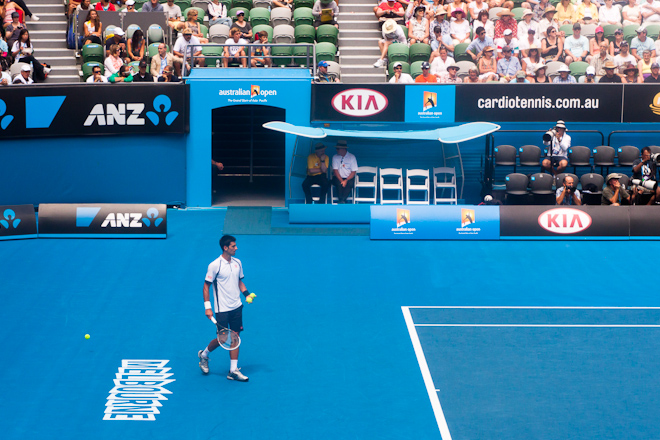 Djokovic with two balls at once.. cheating! This was the moment I realised something amazing about tennis balls. If you put a second tennis ball up your underwear during backyard cricket you can quickly continue the game when the first ball you bowl disappears over the fence.