I've never lived in Melbourne, but it's one of my favourite places to visit. I drove there and back on the weekend. Jeeping. Vanessa and I were like either the opposite of storm chasers, or ducks.

The drive from Sydney to Melbourne is not as good as the drive from Adelaide. It feels like cheating having dual-lane highway almost the entire way. Overtaking doesn't come with the same satisfaction. Also, on the return trip, you end up in Sydney.

Book-ended by a dozen Coles Petrol coffees I attended my second 21st birthday of the year (and I guess third, it was for identical twins). The speeches portion of the night reinforced my feelings on how unintentionally cute and sincere twenty-one year olds are when they try and make serious speeches, and by extension this made me feel old. Then I thought, imagine how old people over thirty feel about this, and I felt older. Then my thoughts turned to the over forties and I had to try and distract myself from the crushing fear of aging by asking random party goers who their favourite twin was. Mostly everyone was diplomatic. Then after a short sleep and a delicious breakfast I drove back here. 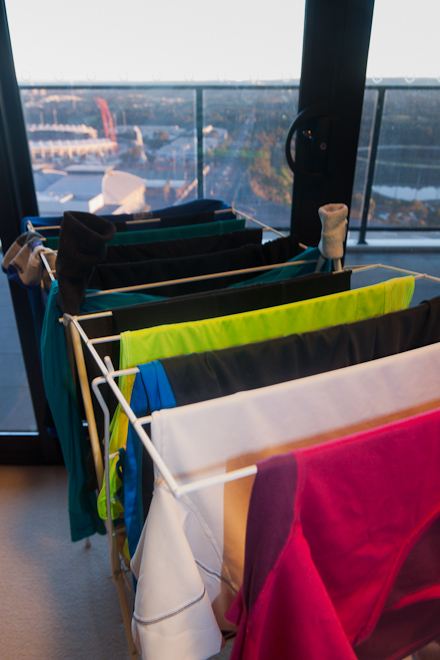 I seem to hit a journal block every year at the start of July. In the past seven years I've managed multiple entries in its first ten days only once. For some reason at this time of the year my creativity and natural wit is stifled by some unknown force. These are the kind of things you discover when you maintain a journal for the majority of time that's passed in this egocentric century.

I can't work out the cause of this. Could it be the oppressing darkness of business hours sunsets? The cold? The exhilaration of a new financial year? My confusion has led to some strange behaviour over the years as I attempt to re-jig myself until entries fall out. In 2007 I spent a week trying to live like it was the Nineties with some success. Unfortunately I've already spent the last three and a half years living like it's the Naughties, so I can't really follow that up.

This week, for not-journal related reasons, I woke up at 6AM every day for the first time since... Actually, I'd wager this is the very first time I've even been out of bed at 6AM for five days in a row. I spent an hour each morning playing with Python code and watching for the sunrise. Yep... What did I gain from this? The inkling that I often have strange behaviour that seems to occur around this time of the year, and that I should data-mine my journal to confirm...

I jogged across the Harbour Bridge and back today. For funsies, not for journal related reasons. That bridge is high off the ground.

There's been a lot of sport on this week: AFL matches, Ashes, State of Origin, and EPL clubs playing in Australia. I've watched a lot of it on TV. Mainly because I have a fascination with hoping to see my house on television. During all this watching I've heard a lot of talk in interviews and commentary about The Boys. Doing it for The Boys. The Boys being really disappointed. The Boys knowing they've tried their best. The Boys showing that all the hard work has paid off. The Boys. The Boys.

It has been so warm this Winter I haven't had a single drop of soup.

He wasn't the best person for rescuing those owls. In fact, he might have been the worst qualified. The least appropriate. I guess that's what made it a monomyth.

He headed west on the road of challenges, dueling beasts. It wasn't all bad. When it was calm he wondered, why does she need so many owls? The number had seemed aggrandised when she'd first said it. He dodged an oncoming assault from a rider on horseback, he ducked, weaved and continued onwards. The challenges were left behind. Towards the end, the road smelled like chocolate and marshmallow and baking biscuits.

When he reached west he used a slip knot to tether the Jeep to the hitching post on the street corner and made his way up the hill to the Highway Inn Saloon. It was the dead of two-thirty PM, the porch was vacant. Everyone was inside making coffee on knock-off coffee pod machines. The only sound was his leather shoes tapping along the bitumen as he approached the automatically swinging doors. Forty-four taps of sole, forty-four owls that would die without him. He moved with purpose.

Inside the saloon he gave a nod to the barman who was polishing glasses behind the empty bar.

"Morning," the hero said, despite the sun's position.

The barman waved back, mute. It was their thing. The barman didn't really know it.

The doors to the back room were guarded but he knew the answer to the gatekeeper's riddle. He stepped into a green-lit corridor. It was high ceilinged, and smelled of chlorine. The beginning of a maze of pathways and aqueducts. He whistled, waited, no owls hooted back. He went deeper.

Further into the labyrinth the corridor widened. It opened into a spacious dining hall filled with goblins and cowboys all working or drinking or brawling. In the centre of the commotion, on a tiny table nestled against one of the great stone beams holding off the ceiling, the owls were caged. All of them crammed into a single, metal-mesh box. The owls were all the colours: feathers of white, pink, grey, blue, burgundy. They tilted their heads and hooted sad harmony.

He took a step forward, beyond the threshold, towards the owls. From the opposite side of the room his father took one step towards him.

"No," the hero said. His father, his long-gone parent. He had expected to see him at some juncture, but it was only conceptual expectation. The reality made him feel truly afraid for the first time.

The two men strode towards each other, the younger man strategising, devising, thinking of her. The older man appeared calm, his lips presented a reassuring smile divorced from the rest of his face.

The two met a metre from the mesh of the birdcage. The crowd of cowboys and goblins transitioned into an audience.

"I'm just here for the owls," the hero said.

The father smiled, nodded and wordlessly removed a folded piece of paper from his breast pocket. The hero felt his heart sink. He remembered writing that letter, before her, before the owls, before he had left him.

"Dear Papa," his father began to read. Voice like cinnamon. One of the owls chirped, inappropriately optimistical.

"I will love you forever," the letter continued. The hero put his hand to his hilt, but he didn't draw. He listened to the letter, then he read along. From memory.

"No!" said the father. "You're lying?" He sounded unsure.

The hero meant it, but he meant it for her. Not for him. He didn't say that though. The jowls shrunk as the father stepped back, beyond the pillar, away from the owls. The hero lunged, clutched the cage to his chest and ran for the exit. Excited cheers and curses erupted from the audience and some fled with him, others chased the father, some just ran in circles and jumped on tables.

Free from the labyrinth, back out the saloon doors the hero emerged to a setting sun and a yellow sky. The owls within his embrace squawked and hooted in a mania. He set the cage down and peeled back the gate. All freed, they scampered like a river away from the broken-open cage and into the endless sky. Most went in the same direction, their flightpath ultimately devolving into traffic gridlock, but this was acceptable as there was never going to be a return trip. 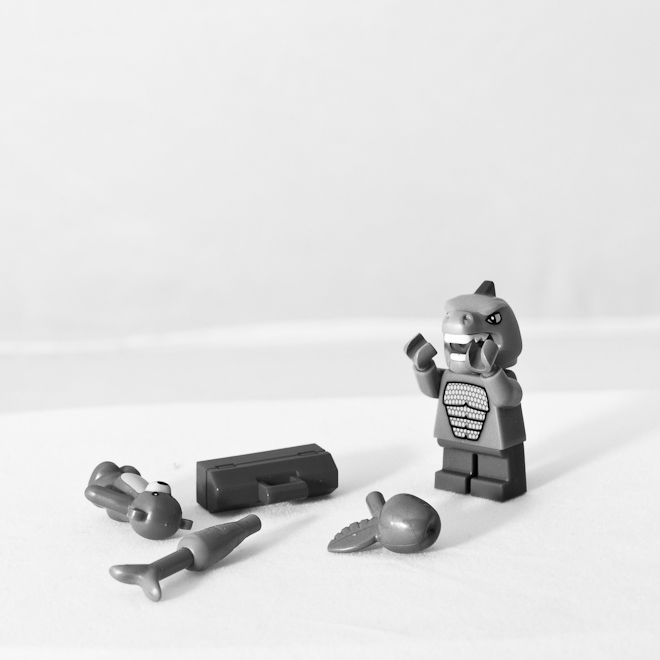 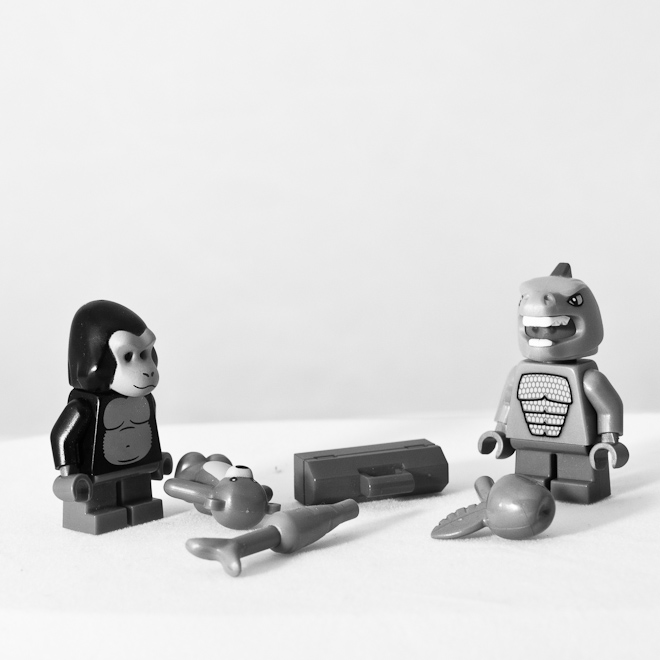 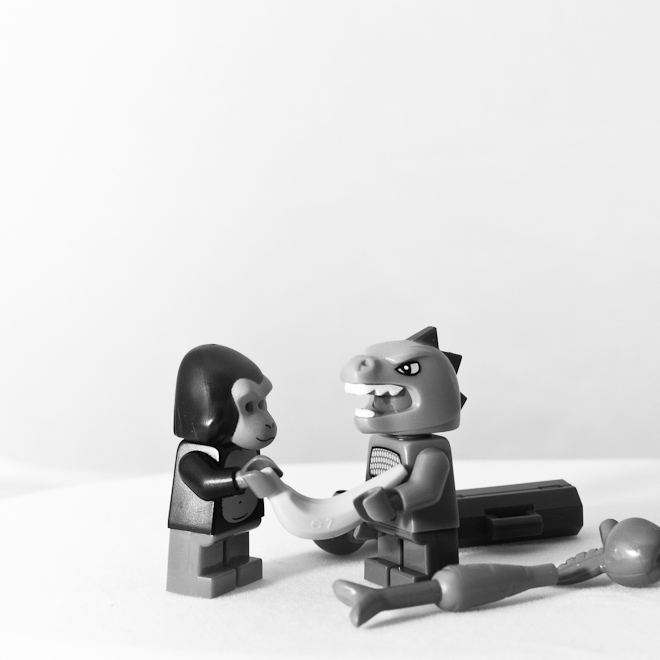 Sydney winter is so tough.

On Saturday, Vanessa and I finally crossed off Palm Beach from the list of Sydney places to visit. 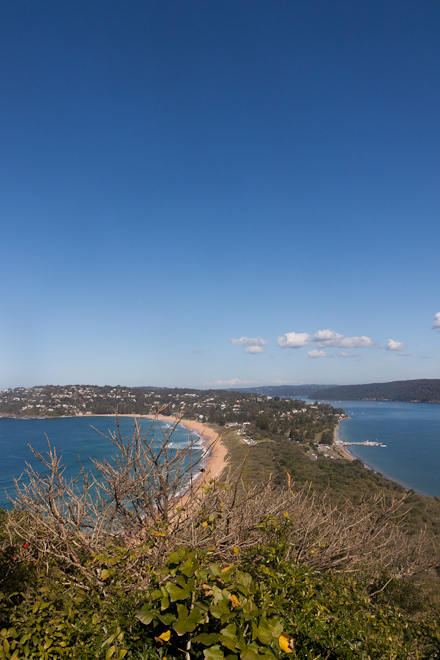 We climbed up the hill. 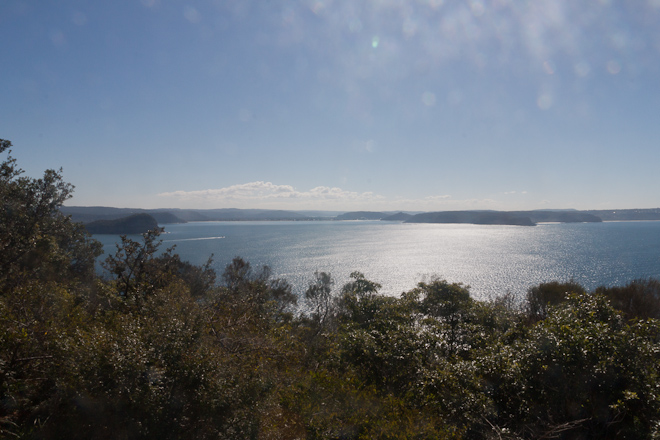 At the top there was some views of the ocean. 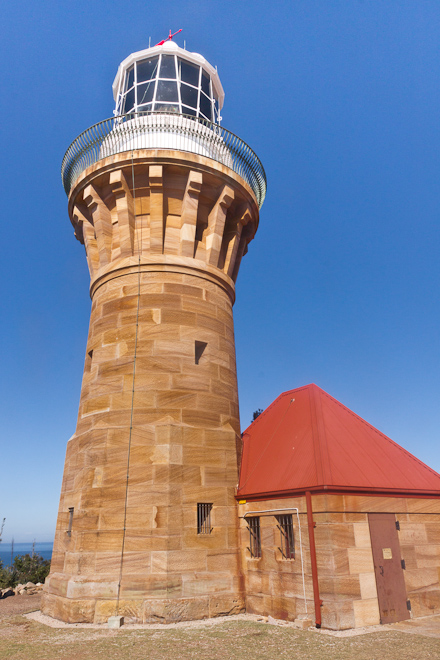 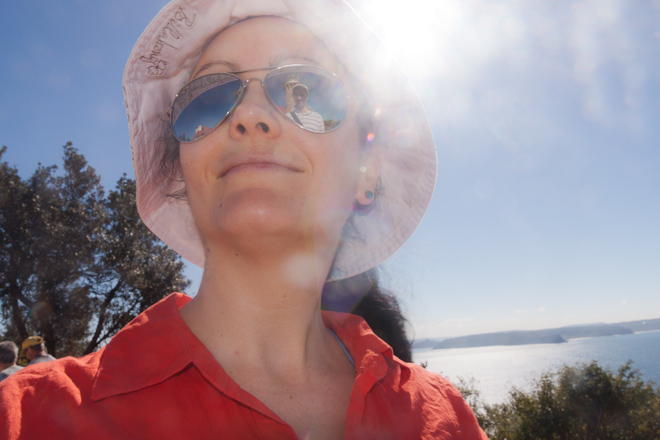 No matter where she is, Vanessa is my guiding star 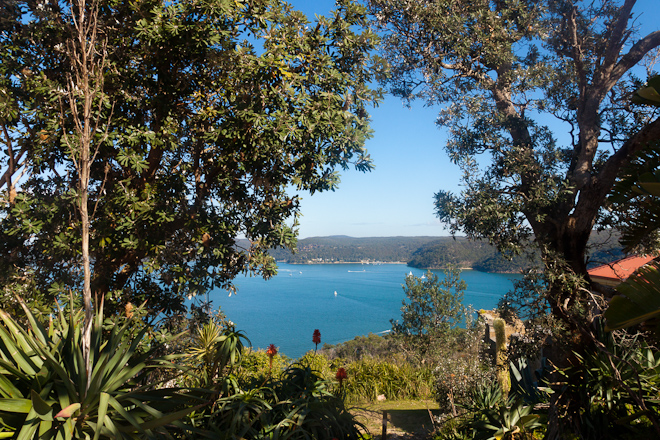 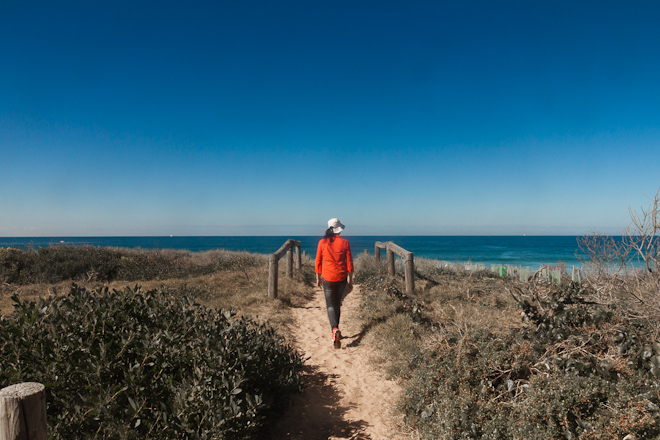 Then we went down to the sand. 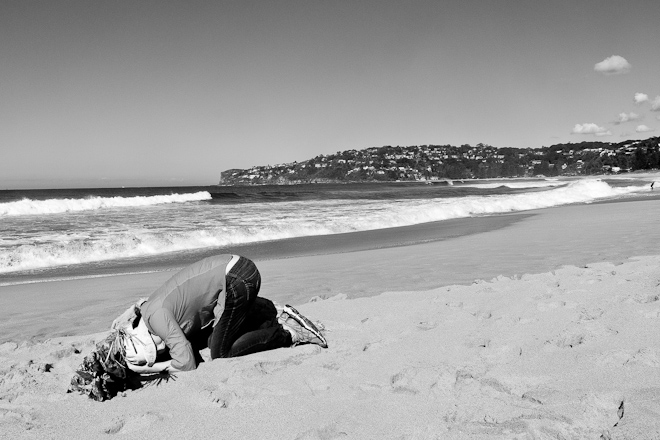 I found some driftwood on the shore that I decided to take an arty, high contrast black & white photo of. 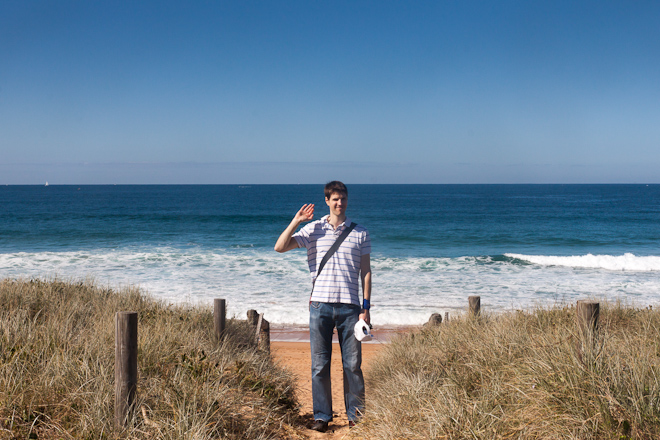 And from the very first moment I saw you. 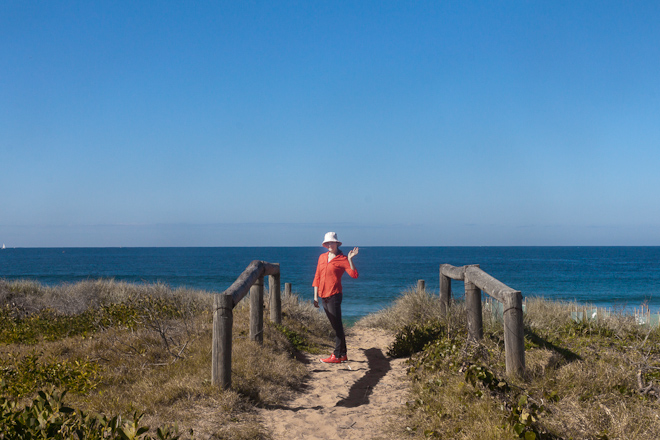 I never felt such emotion

We’re closer each day… Home and away Then we went home.

I've never understood why some Australians tend to belittle New Zealanders and make references to sheep when discussing them. That said, when I was filling in my incoming traveller registration to hand to customs in Auckland and I realised that the mound of breakfast cereal in my suitcase triggered not one, but two of their bio-hazard red flags, I was prepared to level some abuse. Fortunately for myself and the sleepy customs agent and trans-Tasman relations in general there was no destruction of my cereal except by me eating it. In the taxi from the airport I even saw a few roadside advertisements for Weet Bix, leading me to comment, "Oh good, you guys have Weet Bix here too." The cabbie, from India and studying IT at the Auckland University of Technology, gave me a curious look. At first I figured he must be trying to work out why Australians were so enamoured by Weet Bix. Then I remembered that horrifying YouTube video I saw once and that was the first moment it began to dawn on me that New Zealand is not exactly a foreign country as much as it is a BIZZARO AUSTRALIA. Its near similarity is actually more amazing than countries which are actually exotic. Scientifically, you might even say it's an Australia like in a parallel world from Sliders - if you were a scientist who loved watching Sliders growing up as much as I did.

New Zealand - or at least the half-a-dozen streets of Auckland that I have visited - is Australia. Most people don't even have a kiwi accent. The only time I really notice I'm not in Sydney is when I say, "G'day" to people unironically and then realise what I've said. What is different though, is the little things. Like at Subway, they don't have shredded carrot. All the apples have different names and the tubs of yoghurt look the same but have different flavours like Citrus and Mixed Berry (same name, but slightly different freaking berries). It's like some butterfly effect where a slightly different person was randomly chosen for a focus group a few years ago. The two dollar coins are bigger than the one dollar coins... which I guess actually makes sense in some ways. Unlike calling a supermarket chain "Countdown".

Oh God... what if there's a New Zealand bizarro Brad and I meet him tomorrow? I just checked bradism.co.nz with my fingernails in my mouth in case there was. No almost-identical journal with subtle differences was rendered, thinkfully.