I'm not going to pretend like today didn't happen. In fact, I'm glad it did. But it didn't change anything.

You can call me Robert Murphy.

I'm well aware that the odds of being killed in a terrorist attack are lower than being killed by a bus.
Fear is what they want me to feel.
I won't change the way I live because of any terrorist. But sometimes, especially since I turned 30, I do find myself tipping half the frozen berries packet into the blender instead of only a third.

A Bunch of Hot Air

I had an even more amazing experience this afternoon. After using the bathroom at home and soaping my hands up real nice I found myself towelless. I almost panicked. It was sunny today, but not that warm.

I looked to my right where I spotted what is possibly my proudest home-improvement achievement: the suction mounted hair dryer bracket. 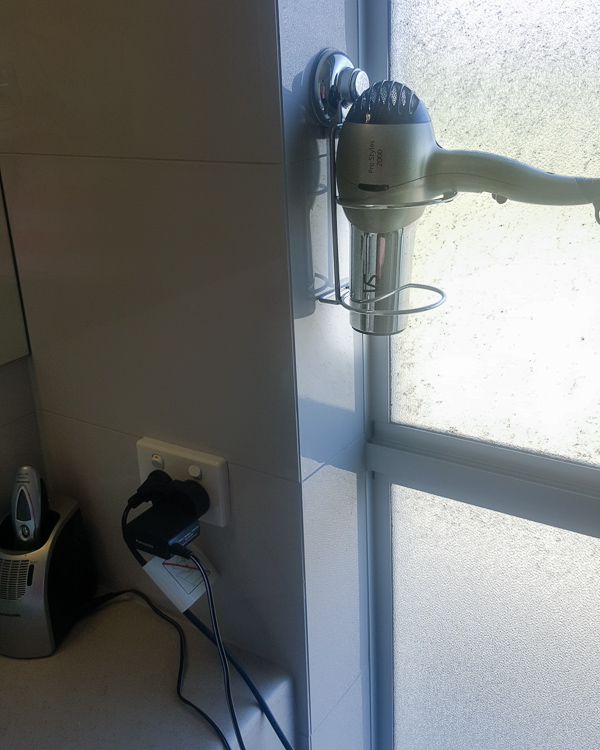 Yep, today is the day I discovered I have a hot air dryer in my own bathroom.

Today was a Monday, so I thought I'd check what new tracks Spotify's Discover algorithm had generated for me. I hoped that this week the playlist would have more melodic, big-beat, indie pop songs than usual.

Travelling Through Space and Time

It's been a weekend of two weathers. Saturday was warm, sunny, windy. Sunday was cold, grey and showery. It's also smack bang dead in the middle of spring. The middle day of the middle month. What better time for me to announce the tracklisting for 2016 Spring Mixtape?

There's a couple of classics and a whole lot of fresh material that will hopefully help cement this period of my life into music. I'll be bumping the below tunes on my walks home from work, my walks to the gym, and my drives to the beach for the next month or so. Years from now I'll be able to put it on and remember the sunny days and rainy days of Spring, 2016. I'll think, ah, back in the days when someone could post a tracklist mixtape on the internet and everyone who read it would keenly listen to all the tracks to try and experience it (on Spotify).

Do you have a 2016 Spring Mixtape? If you do, post it in the comments.

Squeak quits the foster home to live with his cousin Jerome in a boarded up squat in the projects. Jerome is an exciting, reckless companion who makes Squeak feel excited about life, but some of Jerome's lifestyle choices start to eat at Squeak's conscience.

Late one evening Squeak opens up to Jerome that he thinks that robbing parked cars is wrong.
Jerome says, "Ain't your fault cuz, us children need role models and we ain't got none."
Jerome introduces Squeak into his posse and says, "We your boys now. When you feelin' conflicted and shit, holla at us."
They drink and smoke drugs together. Squeak likes the company better than the foster home where the other boys bully him and the social services woman is lazy.

Squeak is not into drinking. The leader of the posse, Munroe, has a pregnant tabby cat who hangs out in the empty lot behind the row where they drink. When Munroe is drunk he is sexist towards some girls walking by and Jerome joins in, but Squeak distracts himself with the cat to avoid the conflict.
The girls walk away and Munroe stumbles around, mumbling about bitch ass gangsters. He catches Squeak playing with the cat.
With a slurred voice Munroe says, "Yo Squeak don't you be fucking with that cat. That's like our fucking mascot, yo."

One night while sleeping on a mattress that stinks of old rain Squeak is shaken awake by Jerome. Jerome says the group need him to be a lookout while they boost cars because their normal lookout has gone missing. If there's any trouble, they should scatter and meet back at the squat the next night.
Squeak is hesitant, but he agrees and helps Jerome, Munroe and Biggie by looking out while they jack the car. As they reverse a hotwired jeep they collide with a mercedes and its alarm goes crazy. The stolen jeep burns off in a hurry leaving Squeak alone. He trudges back to the squat where the tabby has given birth. The cat is sick and all of the kittens but one are dead. Squeak helps the tabby and adopts the kitten for himself. He buries the dead kittens in a shallow hole he digs in the empty lot.

The next night the others return, laughing about their joyriding. Squeak hangs with them until they pass out and then he feeds his kitten before going to bed.
The next night Jerome wants Squeak to help with another robbery. Squeak says he doesn't want to do it. Jerome says that this is how they get the cash for the food that Squeak eats.
Squeak agrees that he's obliged to help. The crew knock off a gas station, stealing eighty dollars.
The next day they all grocery shop together and Squeak secretly buys kitten food. He tells Jerome to keep it private that he has a kitten. Jerome agrees, he says "I'm proud of you cousin for being a proper father to that cat."

A few nights later Jerome asks for Squeak to help again with a robbery. Squeak again says no. Jerome mentions the food and Squeak says, "I don't wanna eat that way."
Jerome says, "I respect that, true. But you're gonna have to find a legit way to make ends meet."
Squeak says, "A'ight."
Jerome and Munroe leave Squeak alone in the squat with the cat.

The next morning Squeak goes to the grocery store to help folks carry their shopping for a dime. After a long day he makes about four dollars which he uses for pop tarts and some milk for his cat. When he returns to the squat the others are still out looking for cars. He plays with his kitten which makes him feel good. It's a hot night so they sit on the stoop where the kitten drinks milk while Squeak pets him and explains how he's going to make something of his life.
A pontiac pulls up as the sun is setting. A man leans out the passenger window.
"That your cat?" he calls to Squeak.
Squeak looks up at the voice. He doesn't recognise the man. In one arm he's cuddling a brown labrador puppy. It's tiny pink tongue is panting steadily in the heat.
In the other hand the uzi was leveled at him.
"Yeah," said Squeak.
"Dogs, motherfucker," said the man.
The squeal of spinning tires follows the squirt of the uzi.

The iPhone came out in 2007. It's kind of crazy to think that less than ten years ago, if you wanted to Google something, you had to remember what it was until you reached a computer. I used to write reminders to myself as SMS drafts. I'm just old enough to remember winter evenings on the train home when it was too dark to see out the windows and everyone in the carriage either read a book or spent forty minutes with an oscillating head just trying to avoid making eye-contact with other people's oscillating heads. Or talking to their neighbours. Whatever.

Humanity has not had long to adjust to the power of the pocket computer. Honestly, we're not ready for it. At first I found it amusing watching young people nearly walk into bus stops or other young people because their eyes were affixed to their screens. Now it's getting beyond a joke. Everyone's doing it now. Even super old people who should know better. They're checking their email while walking through crowds, or looking at image macros (wait, I mean memes) on FaceBook on their way through doorways. How many steps have they done? What's the current temperature? What's the next song on shuffle?

Phones are soon going to come with built in apps that warn you when you're about to walk into something in front of you, and people are going to celebrate it like it's not a sign of our impending societal collapse. I'm calling it now. My New Years Resolution for 2017 is to never walk and look at my phone at the same time. I feel strongly enough about this that I'm resolving for 2017 in October. I am going to become the only person on the planet who steps to the side of the footpath before taking the phone from the pocket and turning the screen on. I'm posting this online to help keep me accountable. Humans will almost definitely evolve into a species that can walk and read a phone screen simultaneously, but I don't want to be on the wrong side of that natural selection process.

Today was called "Cloud Day" by a certain IT industry heavyweight who were running a six hour marketing session in the conference rooms of a CBD hotel. I'd been looking forward to it all week. These events usually have free food, free coffee and you don't need to take leave to attend if it's relevant to your work. They also provide an opportunity to forget about your existing job and think about all those greenfield projects with cutting edge technology you could be involved in if you stopped wearing polos everyday, moved to San Francisco, and worked really hard all the time.

I arrived just in time to skip all the networking, get my first free coffee and sit in for the keynotes. There were some very flashy slides, with some cool phrases pasted on top of gorgeous, superbly arranged stock photos. Actually, I became so distracted by the stock photos that I stopped thinking about what cloud solutions I could architect and wondered how I could get into the stock photo industry. Then I wondered what kind of food and coffee there would be a stock photo industry conferences.

Finally, I ignored the vegetables and picked out about half a kilogram of beef from the casserole in the free lunch buffet, because beef is expensive. Good thing I had elastic capacity. 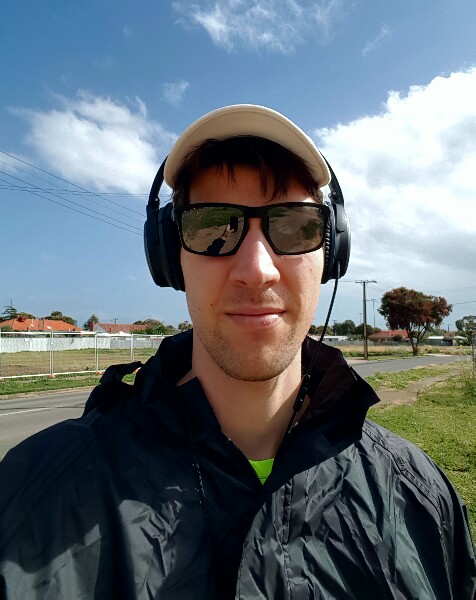 I think this hat, sunglasses and raincoat selfie sums up my impression of spring so far.