I should not have waited until mid-winter to try and wear in my new jeans.

I mean, that's not really what's happened. I've tried a few times since February to work this pair of Levis in into something that accommodates my thick calves and lengthy pegs. I have a lot of confidence in these jeans, the fit around the waist is perfect, the inseam matches my anatomy all the way down. It's just twisting, bending, and sitting that provokes odd murmurs and constrictions.

You always take for granted the comfort in a pair of jeans well worn. My previous pairs were bought in 2014. The blue pair has butt holes, so I've been wearing the black pair in almost all situations since I first felt that unexpected breeze.

God it hurts. I don't remember new jeans being this tough. I Googled how to break in denim, and found an article which recommended wearing them in a warm bath for fifteen minutes, then doing ten sets of squats. My back doctor said I shouldn't do squats, but my other doctor said I should attempt more exercise to try and fix my back pain, even if it hurts in the short term.

This gave me an idea.

I'd love to exercise again. And I'd love to have a comfortable pair of jeans. (I'm not naive. Like the planet, that black pair isn't going to last forever.) At some point I'm going to need to suck it up and wear the new pair all the way in. I figured, why not do exercise in my new jeans? Push myself towards fitness goals, and break in that denim simultaneously.
I called this my stretch goal.

So, on a sunny Sunday I commenced this operation. To do 12,000 steps, and numerous body motions, in my new Levis. After a few side bends and squats at home, Vanessa and I visited Ikea. There, navigating that labyrinth, I threw in a few goose steps and lunges for good measure. Then we went to the outlet mall, parking got my heart rate up, and I did another short set of squats as I found a pair of "stretch" jeans in a menswear store. After standing, with these new jeans on, and then squatting again, making sure I could pick my keys up off the ground, sit on a stool, access my intimates, I realised that for $35 I could achieve what I'd set out for. A comfortable pair of jeans without butt holes. I bought them immediately.

Ironically, all that punning about in the lead up actually stretched out my Levis. I guess mid-winter was a good time to wear in my new jeans.

One For The Regulars

This afternoon I paid ninety-dollars for shockwave therapy on my hamstring origin tendon. For those unacquainted, shockwave therapy breaks down scar tissue using electrical pulses. For those acquainted, we now know how cattle feel. It is unfortunate to pay so much money to experience the closest thing to torture I can recall experiencing, but the doctor did have to spend five minutes handling my taint and I understand the need for compensation.

Afterwards, I had twenty minutes in town to kill before my train home. I visited a second hand bookshop, just in case they had any copies of Asimov’s Science Fiction Magazine, which is very hard to find in Australia. They did not, but I browsed the paperbacks awhile and yearned for a book deal, then left to catch my train. On my way out I glanced into an adjacent restaurant which was shutting up for the day. It was a cafe near my old office building. One that offered a solid range of tasty meals that weren’t hard on the wallet, combined with a quiet table to sit at and a newspaper to read. Today the tables were empty, but the proprietor was behind the counter. We only made eye-contact a second, then he winked at me.

I asked the lady behind the supermarket deli for 250 grams of shaved ham.
She picked up a handful of meat, dropped some of it, picked up a little more. The scales showed 280 grams.
"Sorry, I was guessing," she said, apologising for not being some ham-measuring cyborg, I guess.
"It's okay," I told her. "I was guessing how much I'd even need."

I think that's what everyone is doing in life. Doing their best, guessing. That's what I guess.

Been years since I made bagels

Ever since I sliced my fingertip off, I've semi-subconsciously avoided making them again. But, had a craving, so whipped up this batch of whole-wheat pumpkin this morning. 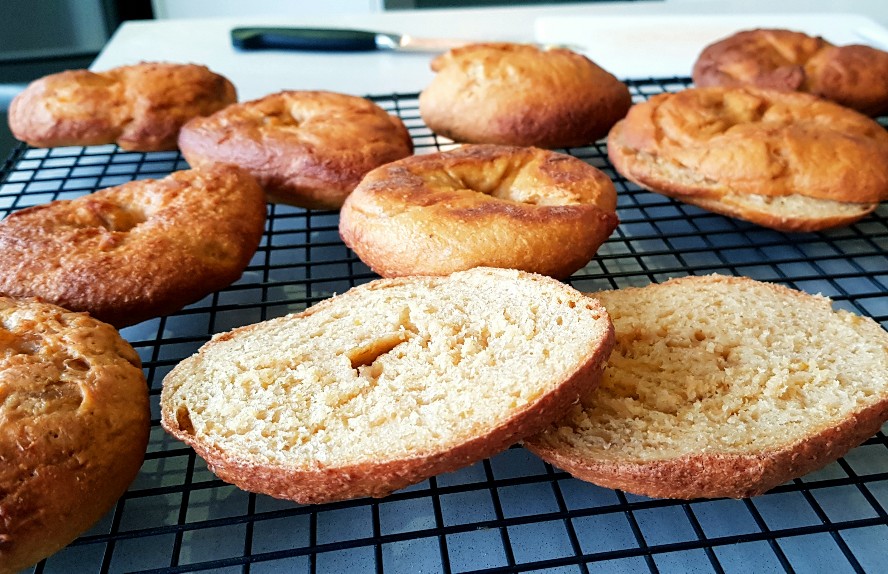 I guess it's true, what go around come around.
Add Comment

Persecuted without cause. I am stateless. No choice but to persevere.
The world around me simultaneously moving too fast, too sludgy.
I am beyond the reach of reality, but latent expectations court their tolls.
My heart weighs heavy, my legs move as if shackled. Each breath may be my last, but I will not give up. I'll never relent to the travails of this battle. Though demons plague me, I hold onto hope that liberty might prevail. One day.
Until then, every second is a victory. Anything more, a triumph!
On the other hand, it's just a cold.

I feel like - at this point in my life - I have gotten the hang of winter, and this year I haven’t overreacted about how fucking cold and miserable it is. By age 33 I’ve learnt about base layers and insulation, and from the end of May I pack away all my dri-fit shorts and hang out my four pairs of Merino socks to rotate through each day with infrequent washes until ducklings.

I keep the blinds open during the day to let the sunlight in, then close them when I get home in the evenings to check on the slow cooker. There’s linen sheets on the bed, oats in my belly. I’ve taken charge of winter. The above-average temperatures, and half the usual rainfall has nothing to do with my dominance.

While I have been killing it, and never complained once about how it’s dark from 5pm and the sunlit time only increases in length by like twenty seconds each day for weeks, one area I haven’t quite hit five-stars in the metrics is tracksuit pants. While outside the house I am generally toasty and not being whipped by Antarctic winds which are specifically targeting the face that often, inside the house I’m still wearing a pair of tracksuit pants I bought in 2008. And they were specifically the same model as the much-loved pair I’d lost and needed to replace. What amazing advances in tracksuit pant technology over the past decade had I been missing out on?

With some overtime pay in my pocket, I set out to ask the sportswear sales assistants of Adelaide, “What is the best, most technologically advanced pair of tracksuit pants you’ve got?” And this is what I found out.

If you haven’t really thought about trackpants technology recently, I will provide a brief summary of this complicated science. The goal of a good pair of tracksuit pants is to be soft and flexible, while also being restrictive enough to trap the warm air from your body within the pant legs.

The first component of this leg warming is achieved through the material of the pants.

The first pair I tried were the Adidas Tech Sweatpant, which were soft to the touch, and had the word tech in their name. I had high hopes. Their tag claimed they were a 59% polyester / 41% cotton knit. That was awfully specific, I thought. It must be the peak level of tracksuit pant material technology. Forget rounding to a whole number and calling it a day, Adidas tracksuit scientists had clearly tried every possible permutation of polyester and cotton and this is what they came up with. I carried a large pair into the changeroom, and this is what I found. 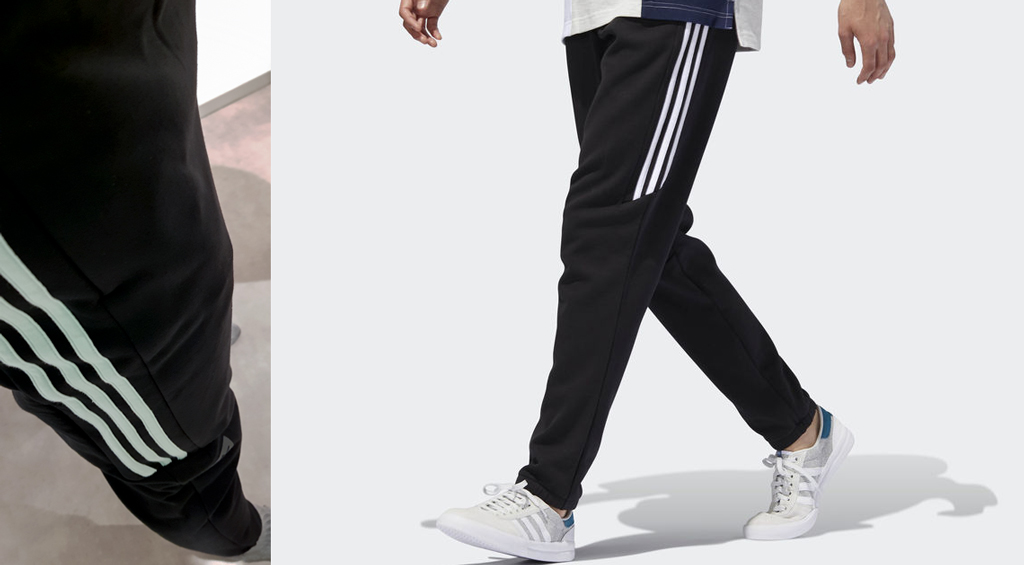 The second component of leg warming, the fit of the garment.

In the promo shot, some model with literally no calves gives the impression these pants will hang comfortably from knee to ankle. After squeezing my hoofers through the leg-holes it became apparent what I’d missed out on in tracksuit pants’ evolution since 2008. We were now doing slim fit.

This shook me a little. Surely they couldn’t all be like this. For those unaware, the closer the pant clings to the leg, the tighter the seal at the ankle, the more heat the pants will trap. But this was unreasonable. What if you wanted warm legs, but also wanted to walk up stairs? I passed the pants back to the salesperson and left.

Day Two
I still hadn’t spent that overtime pay. I visited the Nike store, went up several flights of stairs. That had to be a good sign, I thought. What cruel fate would put the tracksuit pants at the top of three flights of stairs if you couldn’t walk up the stairs wearing them. 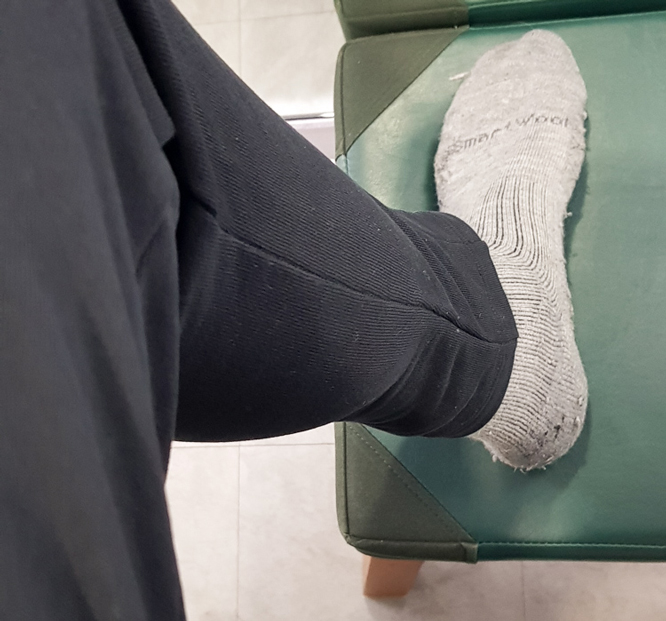 Despite what the salesperson tried to tell me, the Nike pants were almost identical to the Adidas pants, except with a swoosh instead of stripes.
Although, I did like how the Nike tracksuit pant scientists had engineered a shell of non-absorbent polyester into the lap of the pants. 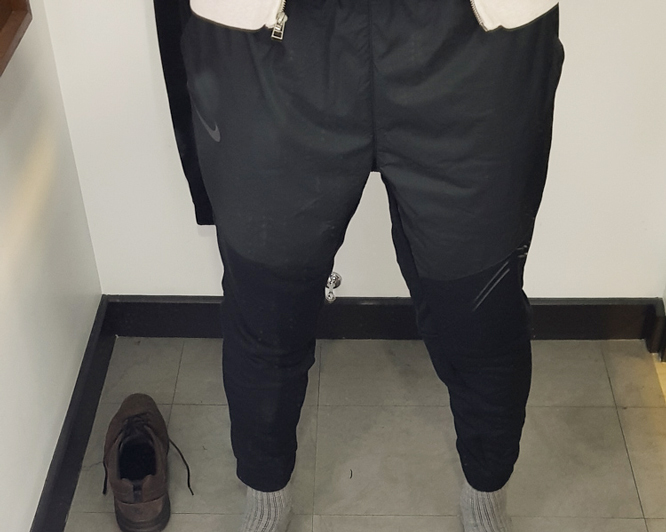 Those tracksuit scientists clearly knew that users would be eating big bowls of stir fry on the couch in these units.

Week Four
A few weeks passed before I had the resolve to again try to find the pair of track pants I deserved. The first thing I noticed upon walking into the sportswear store is that, by this point in July, the tracksuit pant choices were running low. And, the styles which remained were stocked only in the odd sizes of XXL and XXXS. (Yes, I do appreciate the irony of calling out odd sizes while carrying around calves the size of footballs).
I had no idea that tracksuit pants had seasons, and that the sportswear store was probably clearing shelf space preparing for their dri-fit shorts sale to sell to every sucker who gets excited about ducklings.

Among the dregs on the clearance rack I found a pair in a colour I probably wouldn’t have chosen, and was immediately excited by the “Relaxed Fit” wording on the tag. With material as soft as down, I slipped them on and stood. 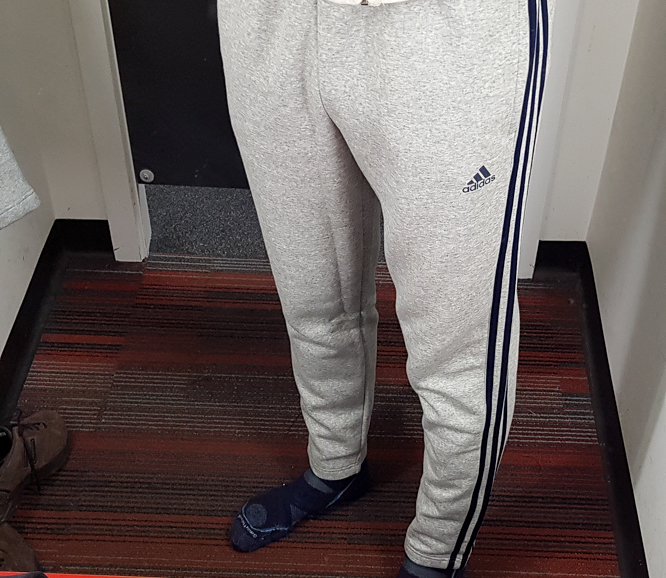 My first thought was, for a relaxed fit, they looked almost too formal.

While they did cling to my lower legs a little, I could stand and sit and bend. Outside the wind howled, and I just knew that my house would smell like wet dog that night, so I figured seeing I was handling winter with such little complaint that I would buy these pants and call my quest complete.

They were also the only pair left in a Large.

The sportswear sales assistants of Adelaide were relieved.