I made an omelette for dinner tonight using fresh thyme from my garden. It's the first time I ever cooked with that herb, and it was okay, nothing special. I'd eat it again.

Woolworths sell thyme for $300 a kilo, but the plant I grew I got from them for free last year because I spent $20. And all I had after that was plant it and water it and keep it out of the sun on hot days for the last ten months. I just saved myself $3! What fools Woolworths are. I'm definitely going back there next promotion to get more free seedlings for every $20 I spend. They say that all good things must end, and if there would ever be an exception to this proverb it was going to be my Sennheiser HD515 headphones.

On a function of money paid to hours used, I concluded that these over-ear headphones were the most successful purchase of my life.
That was in March 2011.

John Howard was prime minister when I bought these headphones. The iPhone hadn't been invented, all my vertebrae were still intact, and cans of Bundy and Cola were over 100% cheaper than present times. Alas, the sponges I used to replace the earphone padding 3,985 days ago did not last as long I'd hoped for. Also the top padding broke, and the cable was fraying. And the connection would get a little scratchy if you moved the cord too much.

Still, even adding the additional $1.33 I paid for the sponges, the HD515s were the best thing I ever bought. Today their replacement arrived on my front doorstep like a baby at a fire station. The HD 559s.

They're not a prestige headphone. I'm lazy enough that I listen to most of my music via streaming services these days, and mainly I wanted something that was comfortable to wear for hours listening to Kunzite, Run the Jewels, or RÜFÜS as I pounded out emails in my home office, while still being able to hear Nash barking at the person reading the water meter.

I took the new box upstairs and opened the packaging with trepidation, conscious that I was wearing the HD515s on my ears as I did this. I extracted the new headphones, marvelling at the lack of scratches on the plastic, the goddamn girth of the earphone padding. Then, as I went to plug them into my computer I realised that these headphones did not come with a 3.5mm Stereo Jack adaptor to let me to plug them into my computer... This means my HD515 jack adaptor is now my most successful purchase ever.
Add Comment

I didn't like inflation when it triggered a bunch of stock market sell offs in January. I really didn't like it when I was walking around the supermarket this morning and noting how the price tag for nearly every product and service had changed since last time. Low fat, no sugar yoghurt is now $4.50. That's a 12.5% price jump! Does Covid, supply chains, and higher fuel costs truly justify such a steep increase? Can't they just reduce costs by putting even less sugar in it?

On the plus side, I have a salary review coming up.

Life as an IT Professional has had its contrasts lately.

Some days I feel really fulfilled as a I contribute meaningfully as both an architect and engineer, delivering software which improves education outcomes for children, or maintains the pillars of justice within our society.

Other days I spend literally hours writing PHP code so that I can use a background image in entries and have it fade into the background in whatever position I want it to. This is so I can create entries on my phone with photo backgrounds without having to open Photopea and creating a gradient.

Is this a good use of my time? 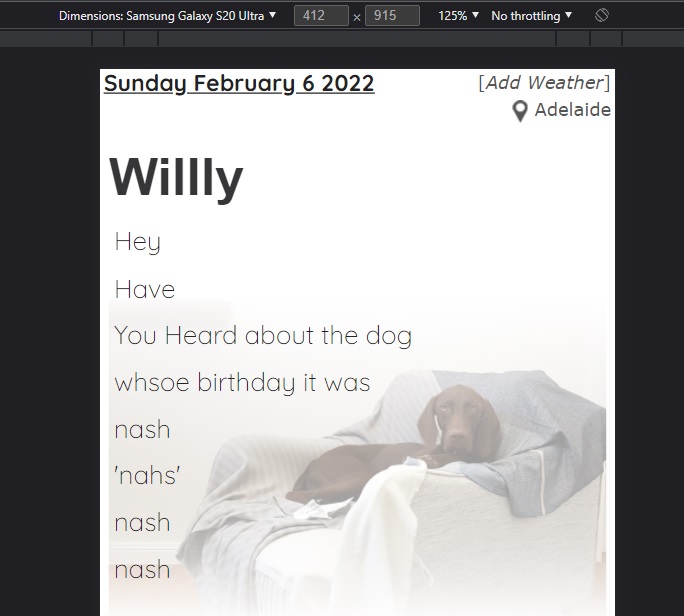 It's not like I spent my whole weekend programming in a dark room. On Saturday morning I rode my bike to the Central Markets, had an iced latte and stocked up on salad. In the evening we drove to Moana for a picnic and a walk along the sand. On Sunday morning we strolled along the river and I watched Nash eat the cream out of a mini chocolate éclair.

I didn't take photos of any of this...

I've been working a lot of hours lately. Enough that by Thursday morning I have enough up my sleeve to go hiking before breakfast, eat some fruit, oats and yogurt on a summit, and then stop for coffee on the way back to my computer. All before the UV becomes extreme. This entry is to remind myself in future summers that this is an excellent way of structuring a week.
Add Comment 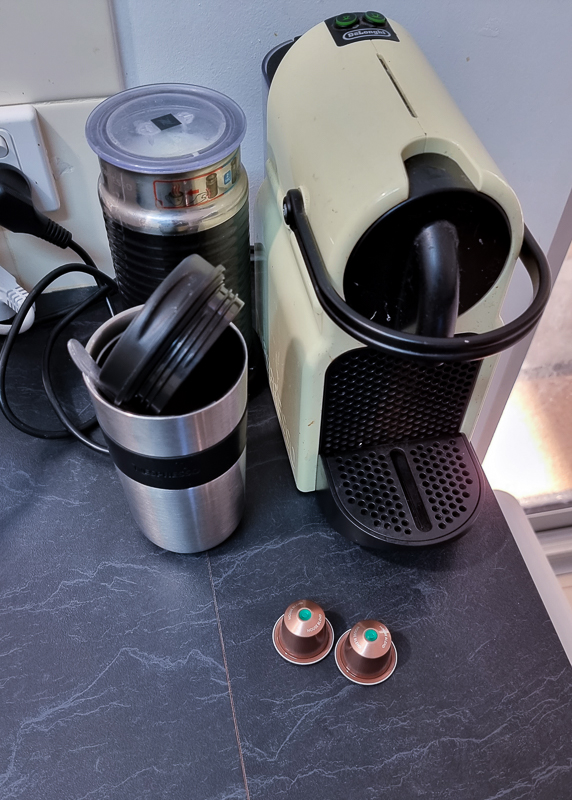 Two spotted doves on the lawn Two tickets to a show A Boy and his Deck - Primo card magic plus juvenile humour. 5 Stars

Falling off my Bike and Fracturing my Radial Head - Poorly executed stunts and not very funny. 0 Stars

After two long months of Covid outbreaks, high UV and work deadlines I was ready for a nice break and so I didn't fly to Canberra on Friday for an extended weekend. I wanted to get out of Adelaide just for a few days. I also wanted to visit my brother and see my niece and nephew so I could give them each a Lego set and get in some good face time while they are impressionable as an investment into earning their help later in life when I'm overwhelmed with whatever digital dystopia humanity builds for itself by the turn of the century. They also have a new puppy who I successfully prevented from eating any of my shoes or other luggage by not being there at all.

The weather was great on Saturday and after not sharing a relaxed breakfast I also did not go to glow in the dark mini golf and beat the small children at the game of hitting a tiny ball into a hole. I also did not need to babysit them for an evening and distract them from their missing father by playing games of Pokemon cards and smash brothers on the Switch with them. Sunday I did not visit an aviary and take photos of multiple exotic and colourful birds up close before spending the afternoon at the local craft brewery playing board games with Steve and Jess while the kids made friends in the playground.

Today I was going to be on my own. Despite packing an umbrella I did not need to use it and there was not a drop of rain in Canberra. I didn't walk the lake and then into the centre of town. Canberra has many museums and galleries worth checking out and I saw none of them. I'd had my eye on Bent Spoke Brewing for the afternoon trying the beers on tap, but I didn't drink any and the companion book I have a hold on at the library wasn't available before my scheduled flight on Friday.

After being sent a free entry pass to the Virgin lounge at the start of 2021 and having it sit on my bookshelf throughout the Delta and Omicron waves I finally managed to use it, as it expired at the end of February so it had to go in the bin.

My flight home was delayed two hours which didn't bother me because I was already home trying to use shitty dictation software to summarise all the fun I had on my long weekend.