What I did on my Summer Holidays 2021 Edition

It's semi-often that I get eleven consecutive days without work. That's like an Easter, an Adelaide Cup long weekend, plus Anzac Day, and plain old regular Sunday all wrapped up.

Given this is my journal I thought it might be pertinent to repeat my previous summer break traditions of preserving an essence of those long summer days for posterity, unlike the other 354 days of the year which are abandoned in the mists of time, distance, and as usual the damaging effects of alcohol on the brain.

December 25th
Christmas morning started with a beach walk with Nash on the sands of Grange. Lunch was at Dad's with many extended family members. It was a nice time. December 26th
First thing on Boxing Day was a hike up Mount Lofty where for the first time ever I got a car park at Waterfall Gully. After we reached the summit we sat down for some choc-raspberry-oats and yoghurt. I saw black cockatoos and sulphur crested cockatoos. After that was a trip to the homemaker centre and big box hardware, and following a salad I set about knocking off half my break's todo list with the things I brought home. Alas, these were all the easy things like attaching sticky hooks to the shelf by the front door, and attaching a new hose head.

Finally, before the sun got too low, I rode to Alex's to meet up with Wilhem and throw a lot of tennis balls. December 27th
The ten person household limit kicked in, and I attended a small BBQ with Josh, Claire and Timmy.

In the evening I drank a beer and started reading From Russia With Love.

December 28th
After breakfast I rode my bike to St Clair for an Albanian coffee, some more reading time next to some birds, and then I bought heavily discounted custard and rode home. That evening I ate a sticky date pudding and played Borderlands 2 with Josh and Sam.

December 29th
It was very hot, and so we stayed inside in the dark and watched Matrix Resurrections and had a smoothie.

Later in the afternoon we drove to Aldinga for dinner and another walk on the beach. Nash tried to hunt and kill a partially submerged rock, and got bopped on her bottom by an unexpected wave. Much mirth was shared.

December 30th
Another stinking hot day where we tried to get a long walk in before breakfast, again along the Torrens. It was around this point that another item on my todo list - Upgrade bradism.com to newer version of PHP and framework - began. I expected it to take me most of the day.

At some point I got sick of holiday software development and drank a beer while making pizzas. December 31st
Omicron hysteria was everywhere. We went on another Torrens walk, then after breakfast to Costco to buy bulk strawberries and salad. I did more Bradism upgrading.
In the evening I made Afghan chicken kebabs and then we rode to Semaphore, swam in the ocean, drank champagne in the dark and then rode home. January 1st
I fixed my flat tyre. The Bradism Upgrade efforts continued. Vanessa made me a mousse cake. January 2nd
We went walking on the beach in the morning. I forget which beach. Later in the afternoon I strapped a Bluetooth speaker to my handlebars, told Spotify to play radio based on Don't Stop Believin' and Boston's More than a Feeling. I rode to Glenelg for another ocean beer, and watching the sunset at the Unit with Gus and Timmy. January 3rd
Invigorated, I slow cooked a pork leg for eight hours and set about trying to finish as much of the second half of my todo list. I ate pulled pork for dinner. The Bradism upgrade continued...

It was a nice break. 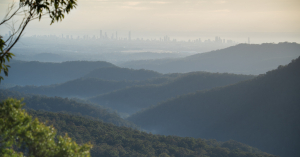 There I was, beer in hand, half-submerged in the ocean and watching the last light of sunset paint the sky red. Tired but satisfied.