I haven't posted a journal entry for a while now, I think my main problem is I keep going to bed before I write them. So I decided to sit down today and write one at 6pm. I call it...

Our top story tonight, upon walking out of his office at lunch time today Brad found himself swamped by slow moving herds of many children. Upon closer inspection - as his stroll was slowed by their thick numbers - he noticed they were all wearing "Ben 10" t-shirts. At the nearby convention centre a Ben 10 Live show had just finished. Brad considering making a Facebook status update saying "I don't know who Ben 10 is, but his minions have taken to the streets." Then another part of Brad brought up that Lego have had a Ben 10 line for a while now, and there's no way he could sell that quip without risking being called on fake ignorance.

In other news, while at Coles, Brad was making several purchases from the deli, specifying product and a weights. After requesting 150 grams of Reduced Fat Ricotta Cheese, the young man behind the counter sliced a wedge from the cheese wheel, alighted it to the scales which showed an exact 150 grams. The two men made eye contact as they realised they were sharing a special moment, although Brad was more in to it. The deli worker still bore a grudge from when Brad requested 200gms of champagne ham and been told to put some back when the scales read 245.

Research shows that the addition of a small window to each of the security doors in Brad's office may be causing more issues than it solves. Previously the risk of having a door opened in your face had been low because the sound of it being digitally unlocked served as warning. Now there is a window, conservative office workers tend to both stutter to a halt when they realise someone is on the otherside of the door, and delays are encountered as they wait for each other to make the first move.

Now to Vanessa, who has the latest on a blue shopping bag which did not make it home from the shops today. "I bought cheap chicken. And those 6 pack thingies of yoghurt were only four dollars. Then, as soon as I left the checkout the bag broke. I had to carry it home like this." And then she mocked carrying a bag with a hand wrapped around either side.

To sport, and the countdown is on to the new NBA season, which starts in three weeks. This would partly explain why Brad visited Yahoo's NBA Sports page while he was eating his lunch.

In finance, Brad didn't spend any money today. The Australian dollar is worth one Australian Dollar.

Now to the weather. Today's photo of "A Lego hobo-mime" is brought to us by Brad. 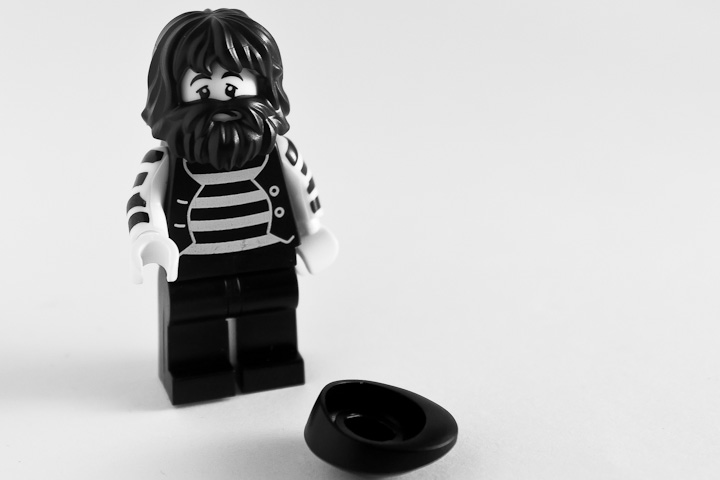 It was slightly cool earlier today, but by the time he'd walked to the office it was much warmer. This proved to be a microcosm of the journey to the gym that would occur later.
After getting home from work Brad took off his shirt and is yet to put one back on.
The outlook tomorrow is further sunniness, with possible cloud and a late shower when Brad tries to walk home.

Kochie better watch his back.

What about your pre-recorded cross to token obnoxious nobody American for the Hollywood gossip? I need to know how Lilo is coping in the slammer.

Is hobo-mime starting at a bed pan?