After basketball last night (we won) I was driving through the back-streets of Hurstville. It was the first hours of darkness following a late evening sunset, the brief gasp of time between darkness falling and children's bed times. I passed a few houses that had been done up with smatterings of Christmas lights and posed decorations, but none could be compared to the epic glory of the last holiday lighted house I passed.
It was a three story McMansion, with its façade adorned like it had been vomited on by a cat who ate a whole kilogram of skittles. Ropes of lights shot out in every direction; thousands of bulbs strung up in a three-dimensional web. Trapped beneath that netting, the front yard was full of reindeer a snowmen and half a dozen santa clauses, all ablaze in the down-lights, and wrapped in fairy light incandescence. The courtyard looked like the acid had kicked in while you were plummeting to your death from a helicopter above Tokyo. In the eleven months I've lived in Sydney it was the most amazing thing I have seen.

Not the lights, the fact that something like this was on display and it wasn't surrounded by people taking photos of it with expensive DSLR cameras.

After I arrived home and showered, Vanessa and I put up our Christmas tree. And then I did take a photo of it with my inexpensive DSLR camera. Then Vanessa put a mirror next to it to make it look like we had more tree. 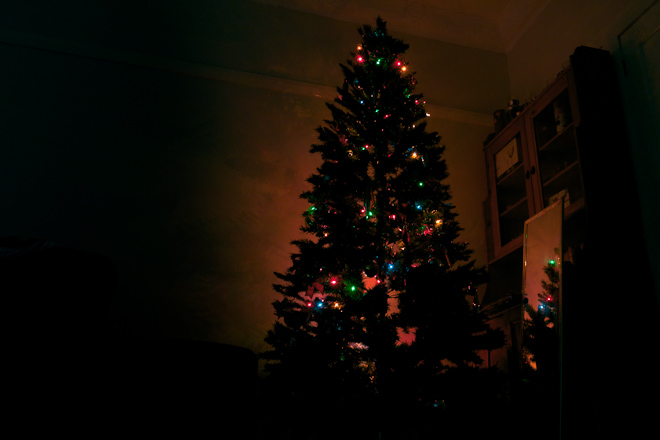 Next Entry: Away From Home