I was in Sydney for a conference today, and I made the poorly-reasoned decision to attend the networking drinks afterwards. I spoke to no one, drank a beer quickly, then fled downstairs to write by a phone charger.

I still had over an hour to kill before I needed to leave the city. I opened Maps to plot my route to the train station, and that’s when I saw, a few hundred metres away, a pub named The Baxter Inn.

Only a few people would recognise this significant of this. Why Google’s unfeeling brain felt the urge to present me with it, I can guess. It probably has something to do with one of the heavily-used tags in my Keep notes, plus the time of afternoon. I clicked on the details and learned that the venue offered an amazing selection of whiskeys and gins. I wondered if this also included the most exotic of dark, spiced rums.
I was already walking. I was about to find out.

I turned down a narrow alley off Clarence Street, which widened into an old loading dock shrouded in the shadows of skyscrapers. In the corner was a speakeasy, bottles of liquour visible through the windows. 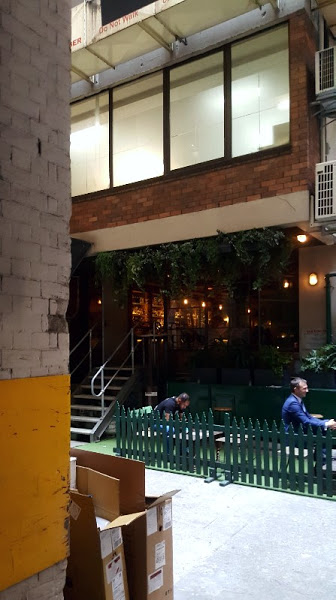 I stepped through the low doorway and approached the bar where a young man with a hipster haircut and a trimmed moustache watched me approach with a friendly smile.
“I’m looking for a dark, spiced rum,” I said. “What do you recommend?”
He glanced over his shoulder at the long shelves of whisky bottles. “We only have one, actually.”
“What is it?”
“Bacardi.”
“Oh,” I said.

I had nowhere else to go, and the itch to write more, so I ordered a dark, spiced Bacardi (which wasn’t actually that bad). I sat in the corner of the bar, working on a short story by candlelight, learning how to sip while negotiating the single, giant ice-cube that floated in my cup. I wrote a couple of pages, felt good about it, noticed on a coaster that the name of the place was not actually The Baxter Inn. I’d gone and bloody stepped into the wrong speakeasy-down-a-laneway-on-Clarence-street and some delicious, spiced rum was in a bottle waiting for me somewhere else. Or maybe The Baxter Inn didn’t exist, or it did but it was in a different universe to the one I was in. That could make sense.

Previous Entry: The Moment You Realise You're Not In Adelaide Today