Two weeks ago I was trying to cut a wooden skewer into pieces to fix a broken cabinet hinge so I could defrost some chicken breast while rescuing some frozen sausages that had fallen behind the freezer drawer, while simultaneously trying to make a giant salad for lunch.

My brain and handyman skills were not up to this task, given the context of so much parallel processing.
I considered myself a bad handyman before that day, and this was not improved whatsoever by the scissor-tip-shaped incision I put into the fleshy part of my left palm.

In the slowed down time between the wound appearing and the blood flowing I had time to reflect on how annoyed I felt with the universe. The COVID19 Pandemic already had me in a holding pattern - waiting patient and useless - as scientists I’ll never meet work to find a vaccine so I can go back to my important life of catching trains, pooping in the office, going to the gym and playing board games in real life. Now I was going to have a secondary period waiting patient and useless, unable to perform bodyweight exercises or ride my bike or wash the dishes until cells under my skin that I’ll never meet stitch together my muscle and flesh whole again. A cycle within a cycle.

It’s most likely you have never cut the fleshy part of your left palm, but if you have you’ll know it’s one of the hardest places on the body to bandage even if you have a wife to help you. By the time the blood clotted and the antiseptic was dry my left claw was more strapping-tape than skin. A cramped talon that, with every flex of my thumb or wrist, seemed to still be exposing the wound somewhere under there to the environment. I grumpily ate my salad. I grumpily stared at the broken cabinet. I watched the opening scenes of Saving Private Ryan and empathised with the bodies being shredded at Normandy. I went to bed and slept and waited.

As they say: time heals all global pandemics, and while COVID19 is still affecting thousands in ways far worse than a cut palm at least my hand has healed enough that I can ride a bike and move the view around in Tabletop Simulator. I’m a lot less grumpy now. It took a while to cure that. It wasn’t only waiting that solved my mindset. It was, ironically, more cycles. Counter-spinning cogs. Innovating patterns for my new way of life. Finding a way to shower and feel clean on a regular basis again. Designing new workouts that didn’t need my fingers. Walking, working, washing in a repeatable routine that took the anxiety out of waiting.

I haven’t fixed the cabinet yet. 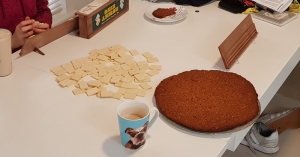 On Anzac Day, Vanessa bakes me a giant cookie. This year I made a time-lapse.

On Wednesday a super moon rose above Adelaide which was supposed to herald the coming of the 2020 Easter Beer Hunt.