I Know What I Did Last Summer

It’s cold in Adelaide. And Dark. On the weekend Vanessa and I huddled together and watched I Know What You Did Last Summer, which reminded me of last Fourth of July, and the week leading up to it which I spent in Oregon hiking and drinking IPAs. It also reminded me that I never posted the collection of beer reviews I wrote over those final days of my Pacific Northwest experience. I found the old Doc and fixed the spelling mistakes. The rest I leave in its pure form.

I drank quite a bit of beer in Washington, from the breweries of Seattle to the breweries of Packwood. It wasn’t until Oregon that I realised I should try to capture my feelings about the beers I was trying so that I was doing more than tickling my brain with hoppy, mild poison. I used my Safeway club card in Sandy to buy a mixed 6 pack of longneck IPAs that looked delicious and photogenic and started my reviewing journey in our cabin at Government Camp at the bottom of Mt Hood. 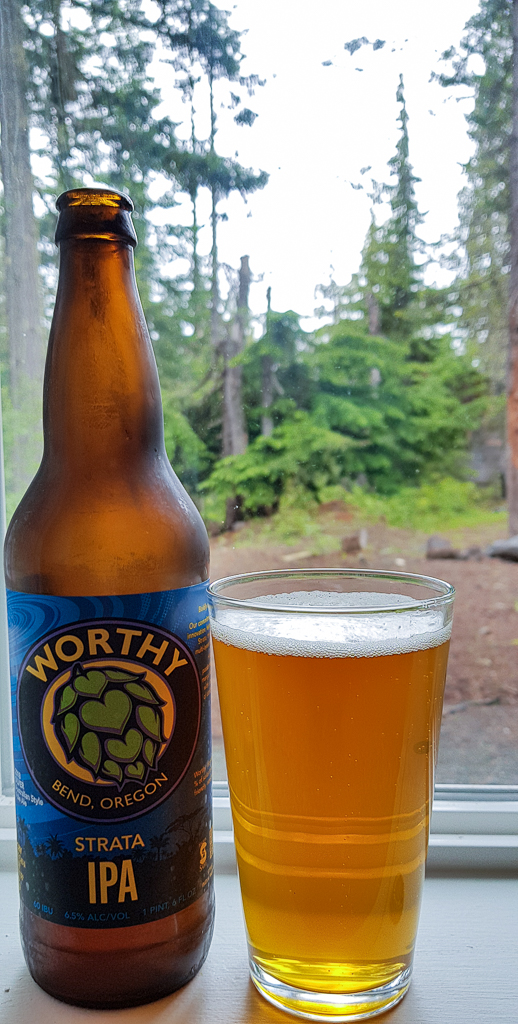 The colour is appealing straight out of the bottle. Rich, light brown and with aromas of beer. The flavours are deep and moreish; not bitter but not sweet. A refreshing, mid-thick ale that fills the mouth but doesn't overwhelm the senses. Despite saying IPA on the label it's described as an “Australian Style Pale Ale”, and maybe that's why a dash was spectacular for caramelising some onions.
Would drink again: Yes 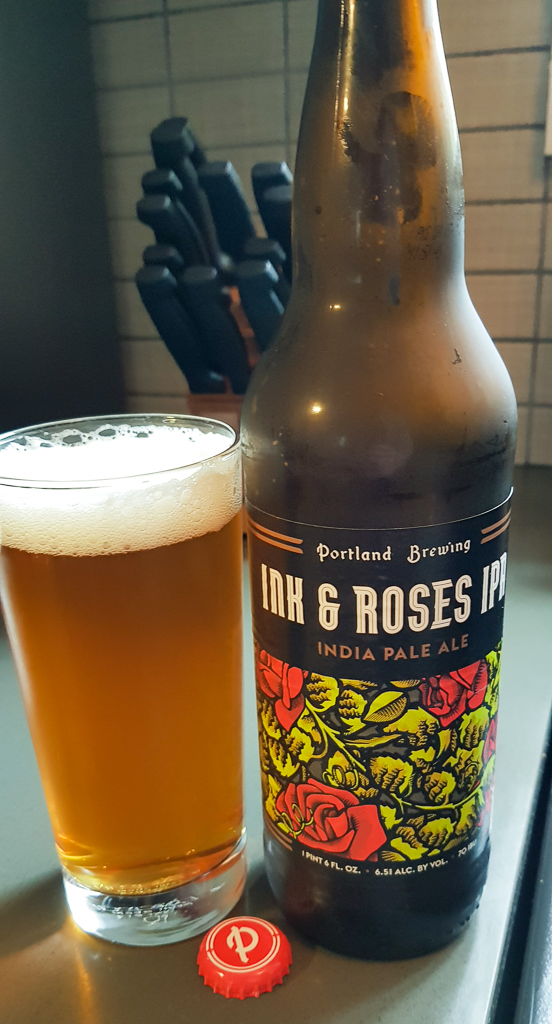 Slightly bitter IPA, highly alcoholic. Not rich or hoppy without a strong aroma. Beery in colour. Enjoyable, but no hints of anything.
Would visit brewery?: No 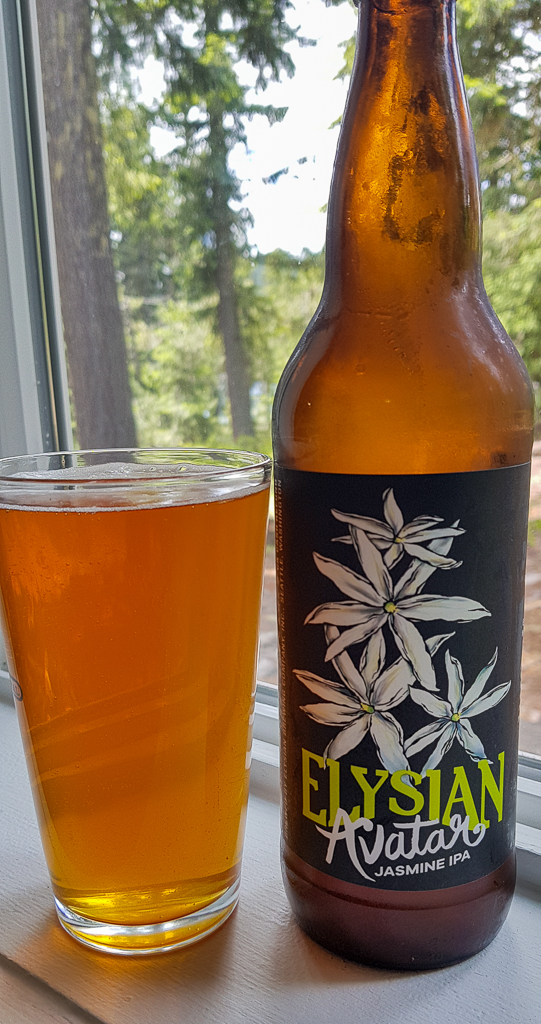 There's a jasmine vine I walk past daily in Adelaide and every springtime it flowers and perfumes a stretch of my foot commute. Jasmine is probably my favourite inedible plant, but that might have to change as these guys have added real jasmine flowers to an IPA. The fragrance is noticeable immediately upon opening the bottle. The flavour is more subtle, adding a slight, sweet and polleny taste to the otherwise effervescent, deep IPA texture. It's not particularly hoppy or wheaty, just a pleasant mouth filling beer with the novel aroma of flowers.
Would drink this beer once a year? Yes, in springtime.

I'd already enjoyed the Deschutes Freshly Squeezed IPA before trying the Fresh Haze purely based on the can art. The smaller Squeeze is hoppier, with the mosaic hops in particular dominating a thick, wet beer.
Fresh Haze has hops as well, though the orange-citrus zest overpowers the strength of the hops and I'd classify this closer to hard orange juice than beer. The sweetness isn't strong, nor can it completely mask the 6.5% alcohol content, but expecting something really hoppy I felt a little disappointed. However with the right expectations, and a greasy breakfast, this beer could be the perfect indulgence. Would drink again.
Number of IPAs in this IPA: Just Right 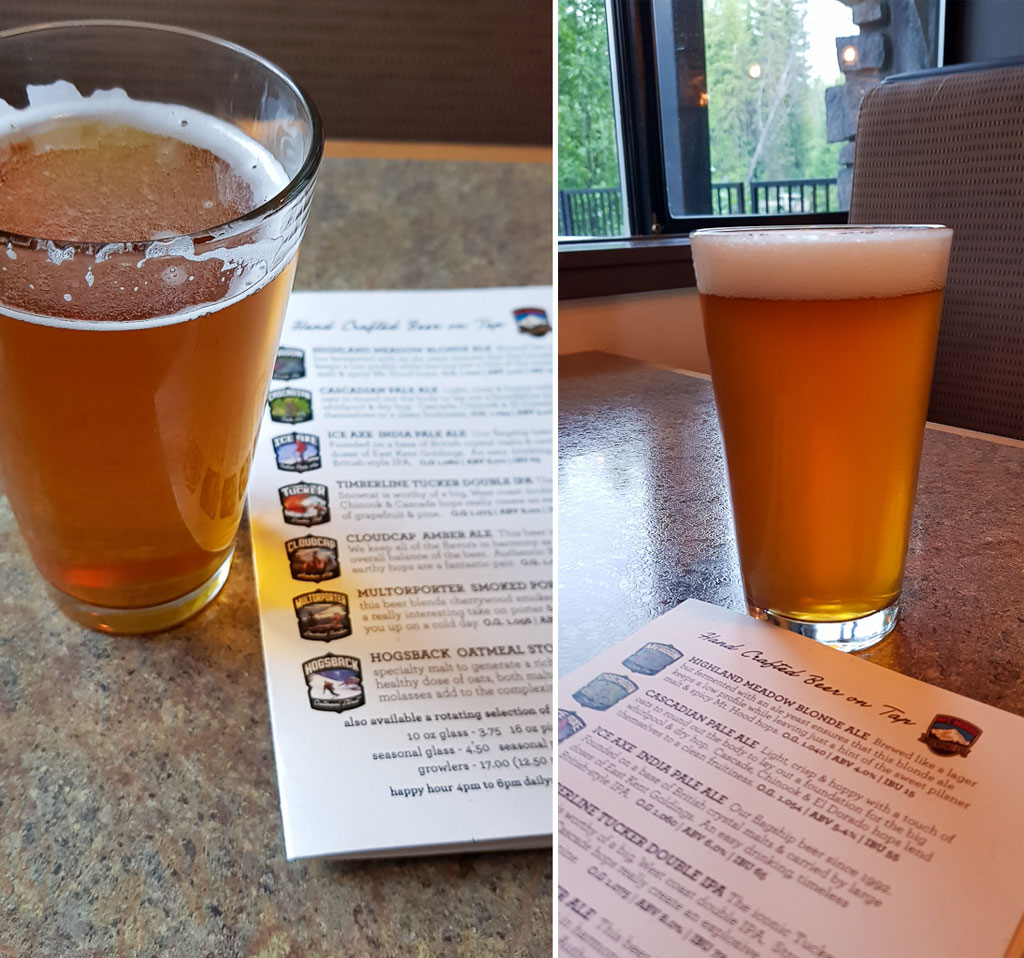 On a day when the low cloud engulfed Mt Hood, we walked to the town’s obligatory micro-brewery to break up the bottle tastings with some freshly poured.
The Ice Axe IPA was served chilled, like a Government Camp morning. The hops are strong, and take the edge off any bitterness - like a bushy tailed squirrel flitting across your slog up the steep inclines of Zig Zag canyon. There is a crisp, malty aftertaste with each sip that tastes like malt.

Mt Hood Brewing Timberline Tucker Double IPA
Mt Hood, Oregon
The 8% alcohol content of this double IPA (whatever that means) is hidden behind a wall of hops, thick beer, and the alleged aroma of grapefruit.
The Timberline is a place of beauty, alpine meadows and snow-covered pines beneath the brutal gaze of Mt Hood's barren, icy slopes. The double IPA is like that, a beautiful, looming mountain of a beer ready for the courageous, and dismissive of the weak… It may have been ambitious to review two full strength pints in the same hour. I may have consumed more IPA than water over the past few days. 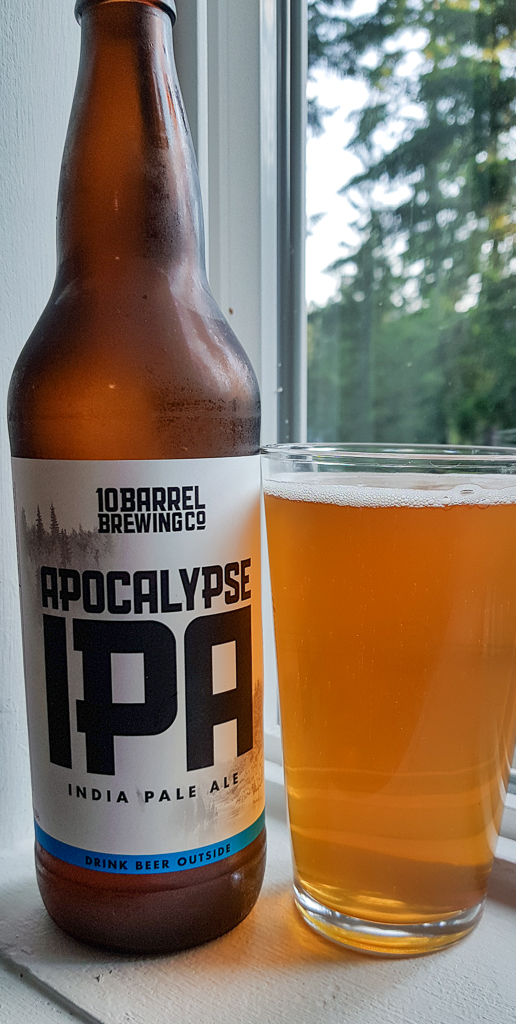 An IPA which explicitly encourages drinking after physical activity, the Apocalypse IPA was the appropriate end of day beer after the last of 19 consecutive days in the Pacific Northwest's national parks and forests. By which I mean I was so numbed to the various hints and hops of Oregon’s beers that I noticed nothing notable about this beer, other than I would enjoy drinking it again and also doing 19 consecutive days of hiking instead of working again.

At this point on my beer reviewing journey we drove from Mt Hood to Salmon Street in Portland for the final few days of our holiday. Not only was there a Safeway a few blocks away, but the hotel provided a new craft beer selection to guests for free every night. I was put in the difficult position of drinking all my remaining beers before flying out, while also trying to buy more IPAs. 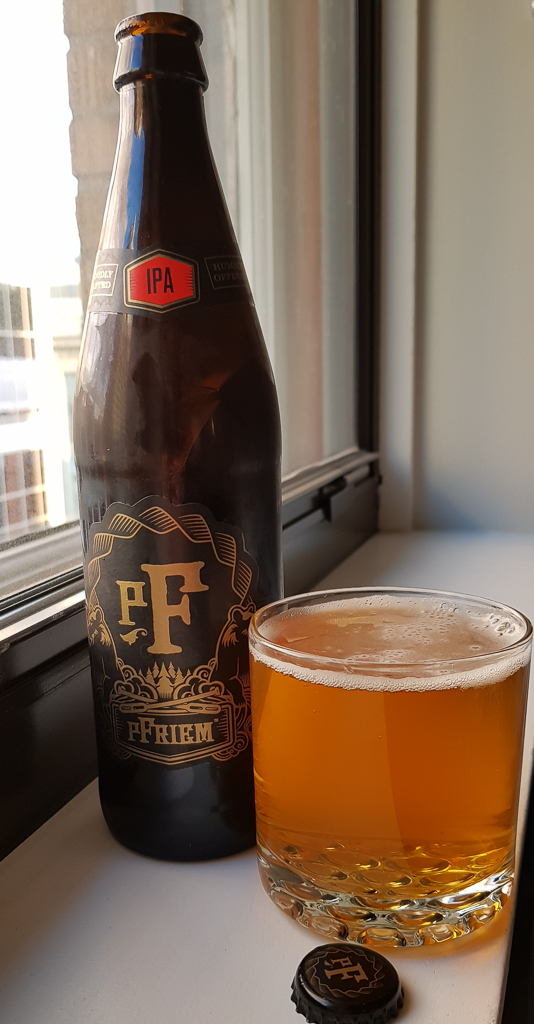 An intense IPA, strong in hops and hints. Aromas of citrus. Aromas of citrus that fill the nose FROM INSIDE THE MOUTH. It has bears on the label.
Particularly refreshing after a long afternoon on the streets of Portland.
Would drink again: Yes. 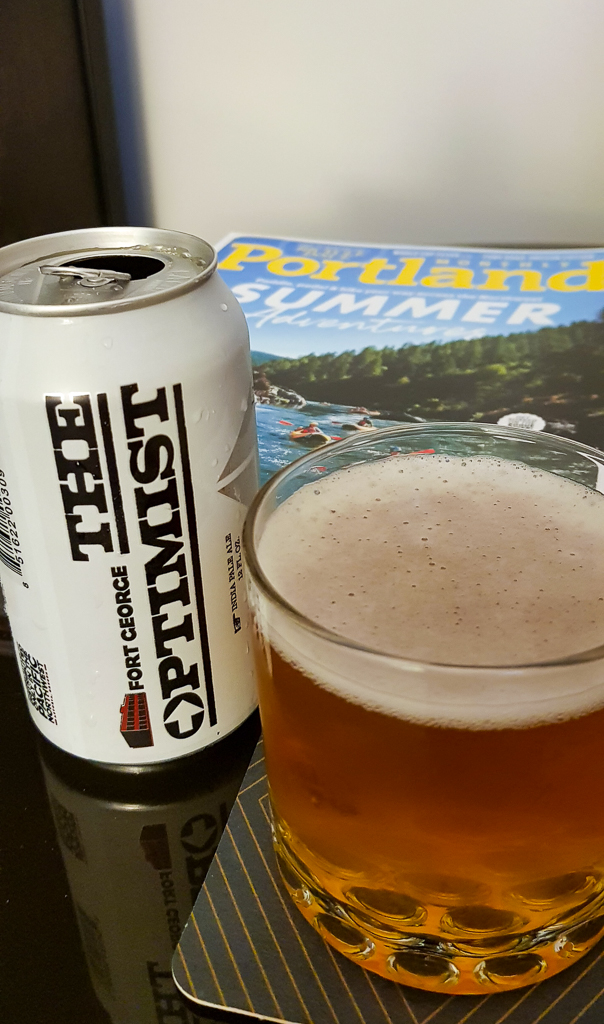 The human body is 80% water. My body is now 80% IPA. And thus, this one tasted like pure water. (By which I mean IPA, I wouldn’t want anyone to misinterpret that this was an amazing IPA. I just mean that by this point, and another day of walking the cool-summer streets of Portland I would definitely have tasted like an IPA.)

I probably should stop drinking beer.

I drank 10 beers. Highlights: a rocky mountain brown ale, an extra-IPA flavoured IPA (Pearl). A cucumber water infused sour that tasted exactly like a watermelon warhead. Sours are amazing.
Not pictured - the IPA I drank at McMenamins on the way to The Pearl District. 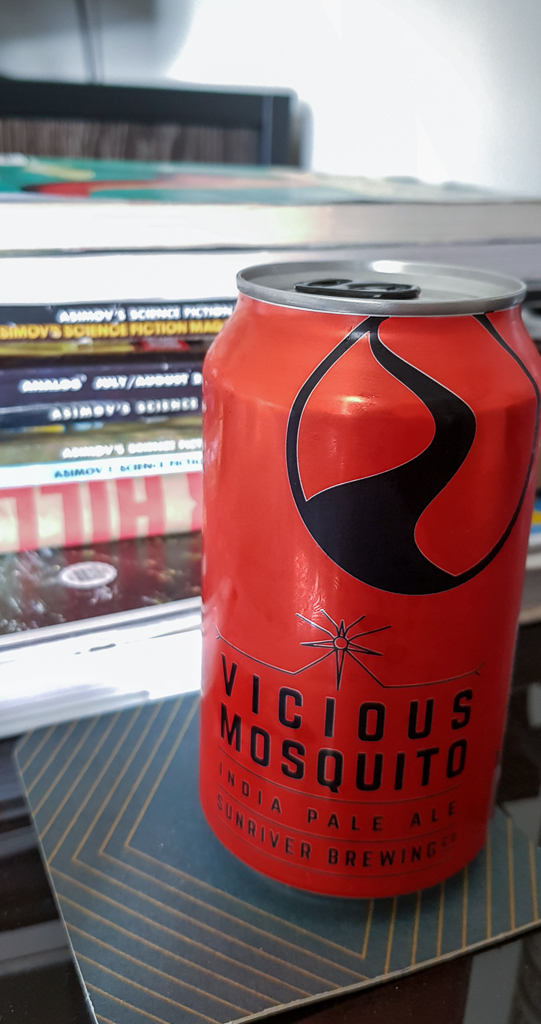 A strong IPA in a little can, like a mosquito [note - I don’t think I finished this review. Not because I was drunk, but because there are only so many synonyms for hoppy]. 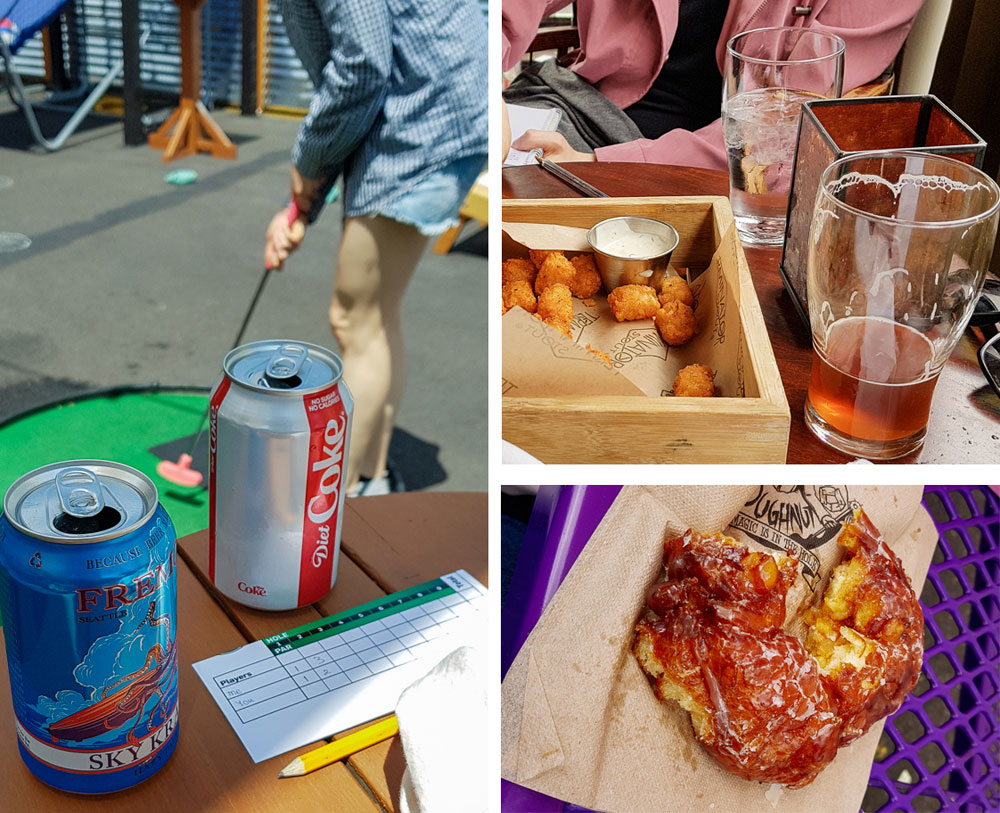 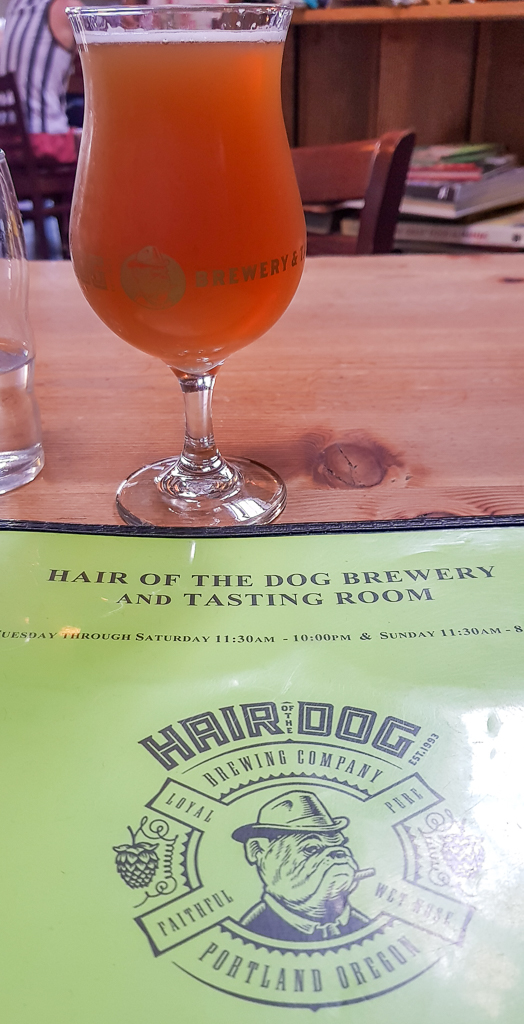 IPA is more than water to me now. It is my body, my soul, it is the air that I breathe. I'd seen Double IPAs on brewery menus in the past, but this was the first triple IPA I'd encountered. The strength was intense. Finally, a panacea to the IPA ubiquity that had dulled the cans of the past few days. If IPA was the air that I breathed, the triple IPA was the equivalent of me being a bulldog, in the car on the freeway, my head out the open window and the air-beer blasting into my brain at 77 miles per hour.
After this, I watched the 4th of July fireworks and then went to bed.
This was the right way to end my beer drinking in the IPNWA.

(If you’re wondering where the 6th longneck ended up)

I visited the Nespresso store today to buy more pods to sustain me through the next few months of working from home. There was a guy standing at the door with a silver bottle of hand sanitizer on a fancy tray. 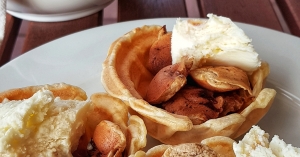