It was bin night tonight. As I fumbled in the dark with the combination lock on the gate a voice in my head reminded me I'd turned the top digit one notch upward when I locked up after gardening on Sunday. Usually, over the past 50 weeks, I've turned it one notch down.

It was striking, the fact that my brain remembered this insignificant detail so astutely after a long day of so much other brain shit. Maybe it was the beats of Multilateral Nuclear Disarmament in my headphones. Maybe it was the Pirate Life Hazy Mosaic and Balter XPA cans I'd just drunk over my autumn bbq. I swam for a second in a sense of pride that my mind was sharp and, perhaps, superior to other minds.

Then it took me multiple attempts to get the gate latch up. In the process I dropped the wheelie bin with a thump. Lesson learnt, I picked the bin back up and humbly dragged it to the curb.

At that point I did notice none of my neighbours had remembered it was bin night. 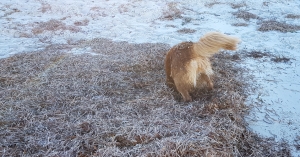 We visited Gluttony tonight. I saw feats of acrobatics, core strength and agility from five human beings and one possum.