It's time to yeet another year and I wanted to reflect on it before my memories become unreliable and I have to query some future voice assistant to learn how I was feeling at times in the last 12 months.

2021 was a year that went both fast and slow, like when you orbit a clock around the Earth at high speed, and then you check it afterwards and it says it's 2022 but everybody around you looks like it's 2020 still. It sounds messed up, but it's a good answer when people ask "where did the time go?"

2021 was in a lot of ways a year of giving up. And I don't feel smug for announcing in January that the pandemic was only going to get worse. Mutate nine tames, shame on you; mutate fifty times, a shame for all of us.

The theme of giving up shouldn't be construed as giving in. Giving up can be a good thing, like giving up chocolate, or social contact... I mean, social media...

I've achieved a lot in 2021, my work life alone is testament to the fact that this year has not flown by, as I only started my consultant role eleven months ago so there's no way I could have been doing it for years (even if full time working from home means you can fit three work days into every 24 hours). But it's true, my first quit at the start of 2021: I left my job of six years. That's two years longer than I owned my VK Commodore.

I gave up Age of Empires II. It was a time consuming folly that I burnt a lot of evenings on trying to recapture my youth. Ultimately I think this was a success, because I wasn't very good at Age of Empires when I was young either. So I'd classify this as "Won and Done".

I gave up on flying. By the end of 2019 I flew so much I took it for granted that I could buy a ticket and go anywhere if I ever wanted to. 2021 was the first year I didn't get on a plane since 2005. At some points during the year even seeing a plane in the sky was a surprising experience. I hope I will fly again. There's not that much I haven't already seen between Port Broughton and Port Elliot.

I gave up Netflix, and BBL, and the idea of watching television and movies in general. Now when I watch television it's probably because my hamstring tendon is inflamed, or because drinking a beer is better when slippery men are bashing into each other in pursuit of a football, or watching NBA socially, or if there's a movie that has a story I want to hear the end of. Other than that I will stare at things on my tiny giant phone thank you very much.

I came real close to giving up Lego. I packed away most of my sets and told my brother I would send the boxes back home with him after Christmas. Then I thought about making a photo series about giving up Lego forever, and after clicking a few pieces together I realised maybe I wasn't ready to surrender this part of my youth. I did reposition my pirate ship so it's not visible in the mirror during Zoom calls though.

I gave up basketball and weightlifting, and I gave up having a bicep tendon that attaches to my labrum. These things are - or were - connected. Health and fitness remains important to me, but I have to concede being strong and hitting corner 3s if I want to stay healthy and fit long term. Who knows what this will look like in 2022. Pilates and riding/hiking probably. At least those can all be done during lockdowns.

All of these things make 2022 seem very exciting, with the long, grey cloud of coronavirus obviously still diffusing the rising sun. As I pass the midpoint of the life expectancy of an 80's born Australian male I will exist with a refined and streamlined lifestyle, set of habits, and functions. I know what I can do with my life, and what I can't do as well. Determined and focused, I should really excel at quitting a whole bunch of additional things in 2022. 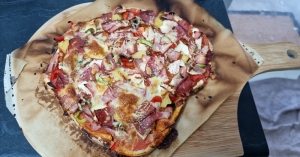 In 2021 I did not use the woodfired pizza oven once, and I replaced our gas oven in the kitchen with an electric one because I bought the new oven without checking that the old one was electric. Tonight I made pizzas with a pizza stone on the gas BBQ and they turned out so well I felt I should capture the recipe for future reference. 348g Bread Flour 7g salt 7g yeast hearty pour of mixed herbs 196ml warmish water 25ml olive oil Knead with bread hook for 7m 30s using low knead for first 50% of time and to one higher than low for final 50%.

Previous Entry: Things Which Make Me Hate Myself

Despite having a rudimentary understanding of business strategy and predatory corporate practices, buying tools at Bunnings. Reading supermarket catalogues while I'm eating.