I love my Sennheiser HD515 Headphones. I bought them almost five fricking years ago when I first started working for a certain company (which they've actually gone on to outlast). I needed headphones that would permit me to hear people yelling into my cubicle at me while I cranked Arctic Monkeys, Scratch Perverts or some Phoenix and pounded out dummy UI functions in PowerScript. (As an aside, Power Builder is a skill I have that I deliberately omit from my CV to prevent ever being asked to work in it again.) I bought them for $160 (I bartered the people at Video World on Rundle Street down $10) and immediately plugged them into my iRiver H340. This entry is going down some serious nostalgic tangents.

About 1800 days later my HD515s have arguably been my greatest purchase ever. I am talking technically, on a scale of money paid to hours used. I would conservatively estimate I average 6 hours a day with them on my head. Time added up from eight hour work days, the walk or train commute to and from the office, the hours after work when I'm programming or editing photos or searching the internet for humourous image macros. Not to mention all those plane flights, long walks, dishes washings and DJ sessions. 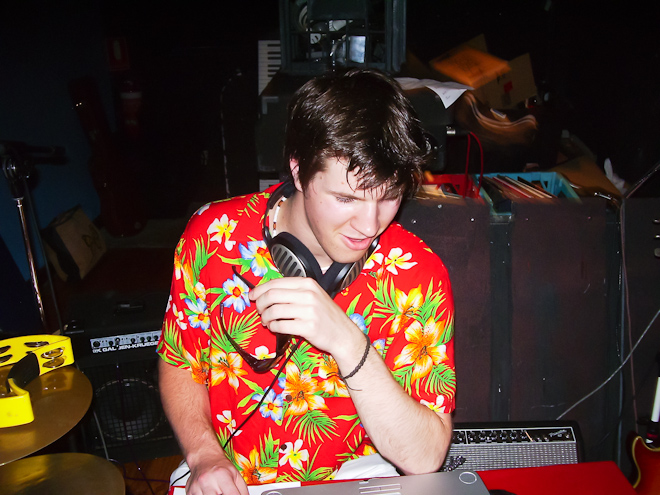 Here is a photo of me DJing at the now defunct Fad Bar one Summer night in 2006, the oldest photo of my headphones I can find. I'm about to drop a mashup of Britney Spear's Toxic with Mike Jones' Still Tippin'. Completely out of sync. How many things have changed since this day? So many things. But the headphones and the fashion have stayed the same.


Based on my estimate of 10,800 hours of listen time with these headphones, that equates to a cost of less than two cents per hour of listening time. Compare that to, say our couch, which to this point has cost me approximately $60 per hour of use. Three thousand percent more cash per hour of use.

I have considered these kind of statistics in the past and have thought of writing a whole entry about them. Only effort stopped me. However, I bring it up today because I want to foreshadow the amount of distress I felt earlier this week when I discovered my Sennheiser's were dying. The audio was fine, outputting at its normal high quality and crispness. It was after using them that I discovered the problem, removing them from my head and noticing a tiny explosion of black powder coming from around the speakers. Upon further analysis (whacking it on the table a few times and seeing more powder emerge) I realised what had happened: after 10,000 hours of use the fabric covering the ear padding had started to tear and the crumbs of what had been the inner-padding before five years of daylight, bag rides, ear sweat and low frequencies was now piling up on my desk. It wasn't just a little bit of powder, the entire ring of padding had deteriorated.

I couldn't use my headphones without the unpadded plastic digging into my upper ear lobes and having a rim of black powder on the sides of my head after each listen. (This scenario reminded me of year 10 when the only pair of earphones I'd been able to afford for my Walkman had fluoro yellow earbuds, and I felt so self conscious about the bright colour that I'd painted them black with permanent marker. A choice I regretted while wiping black dye from my ears with a tissue every morning in homegroup for the next two weeks.) So, I set about coming up with my own solution. I figured, I already owned a sewing kit which I have used to sew on one button (quite poorly) already so essentially my options were unlimited. And while browsing the local Reject Shop for some padding or stuffing and finding nothing I was struck by genius. Sponges! I bought a three pack of thick Oates sponges for $2. 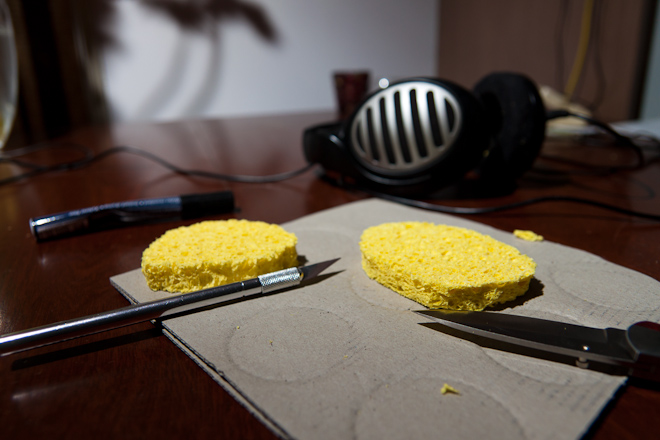 With my craft knife (and regular knife once struck by impatience) I immediately set to cutting out new rings of padding. After shaping the sponges I had to then completely cut open the original fabric and scrape/vacuum out the left over crumbs of the old padding. Once empty I fitted the new rings and after putting them on my head - drunk with giddiness - I was amazed that not only had I replaced the padding of my headphones for pocket change and saved myself the 0 I had already mentally assigned to buying new headphones, but they were actually really comfortable.


Not just comfortable, but also anti-bacterial! And the best part - apart from having my headphones back - is that I essentially also got a free sponge. 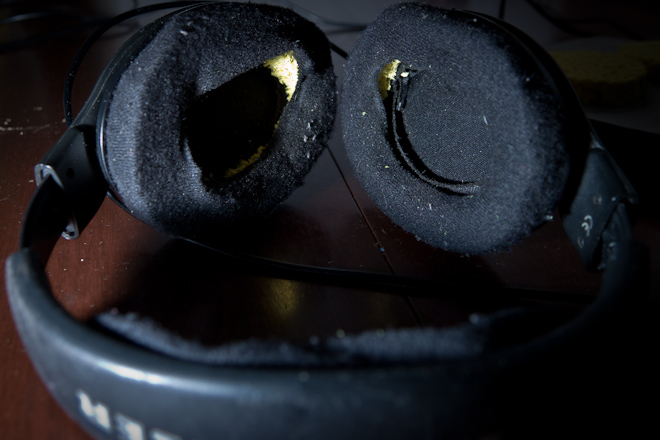 Feel free to share stories of your technically greatest purchase ever.

I am well impressed with this, good hack :)

That shirt is offensive!

I thought that my handiman skills and moderate attempts at DIY home renovation where a considerable cornerstone in my manhood. But this, this is something else, the depth of thought put into this (which is fair to assume was of a very short duration) simply indicates an impressive analytical problem solving ability. If its not obvious, I freaking rate this.
My $300 Sennheisers died in Afghanistan when they fell from my bunk and dislodged the speakers. I too tried to fix them with a knife....

Next Entry: The Weekly Shoot