He accused me of wanting to make love to him even before I told him I was a Western Bulldogs supporter. I guess he saw it in my eyes.

I congratulated him on his confidence and made the suggestion that it would be beneficial for us both if he could use that confidence to shake taggers in the AFL.

Also Beau Waters was also at Marion in the night I coined as "AFL gangbangs real life at Marion". Cooney was having a domestic with a girl I graduated primary school with when I approached him. I couldn't let it go. I can't handle this much AFL or this much real life in November to be honest.

There comes a stage during every night out getting crunk when they play SexyBack and you know that means they're not going to play it again for at least another hour. Sometimes you stay, sometimes you go home and code an awesome phocumentary class for your website that will increase the ease and reusability of insite images by a large amount thanks to a great database back end.

Guess which one happened tonight!

The Day I fucked the Drought

It rained last night as I fell asleep.

When I washed my bowl that contained the weet-bix I put in my breakfast smoothie the water pressure was too high and angles led to my pants getting drenched.

When I got to work I tried to drink from my water bottle but the lid wasn't on properly and my shirt got soaked.

I got drunk on a Tuesday night and danced to SexyBack.

I feel like I'm sitting in a Spa during a Thunderstorm

This is not a metaphor.

I could of used a beer.

Edit: I tried setting 'Today's Weather: ' to this

but it's too hack proof.

The Pressure of Exams Brings Out the Best in Me

My Brain needs a new body to Live In

Every exam seems to be the same. Reading time starts and I'm using the scrap paper to make notes. Suddenly every question I look at leads to an overwhelming flow of answers from my brain to the pen. Before reading time is over I manage to write down a keyword or point for every mark in the exam.

It doesn't seem to matter that 90% of the effort I put into this topic was during the three days prior to the examination using pattern recognition techniques and past exam papers to logically determine the most likely questions and the most non-rejectable answers to them. Nor does it seem too important that 6 hours ago I wasn't in bed or even doing last minute cramming, but instead was playing Sudoku and rocking out to Enya. I think The Exam is the stage where all of the subject's information in my brain realises that it's on a sinking ship - this knowledge won't be required after I walk out of here - and there is a stampede as it all bandies to find a new home in the pages of my answer booklet.

The flowing stream between my brain and paper advanced to a new, literal level today as 20 minutes into Marketing Management blood began pouring from my right nostril and onto my shirt towards the paper. I lost 5 minutes in the bathroom cleaning up but I still left the exam with an hour to go. I headed home, blew my nose some more and climbed into bed for a 2 hour battle against my stupid nose. My head rested and I closed my eyes as I watched the hull of COMM 2002 sink gently to the mind's ocean floor. There it will sit from now on, in the graveyard of topics I have torpedoed the shit out of. But, when necessary, scuba divers can go on tours to visit it and bring back small treasures when I need them.

This Small Patch of Work Paralleled my Face This Morning

I had to look professional today for my first of two days of work that are an island between long stretches of absences. It felt like a Monday today, but it's actually Wednesday! I didn't mind this feeling, especially considering tomorrow is Friday!

The first of my final exams was on Tuesday morning, so the weekend was set aside for studying. I lived whole days cramming inside my room, as it actually rained more this past week than it did through the whole of Winter. But I made the most of my internal isolation and spent 6 days growing a goatee while listening to my lectures for the first time this year: Study and Stubble. 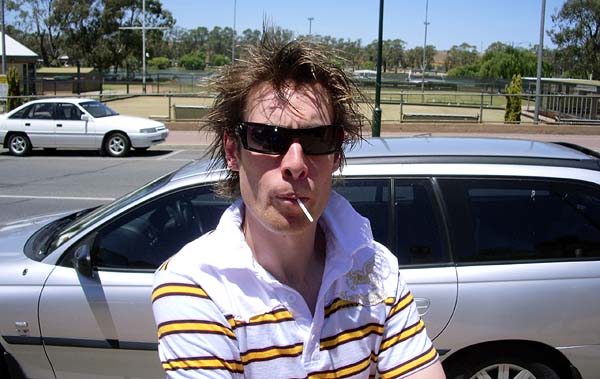 Gus gets in some early sucking practice, ready for the weekend of decadence and dudes. 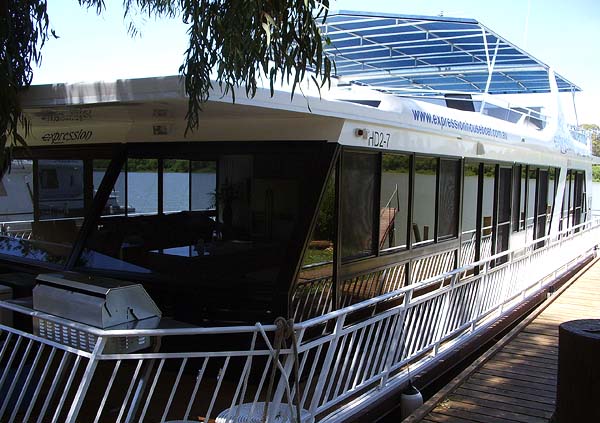 The houseboat, in all its awesome glory. Obviously it is too awesome to be framed in a single shot. 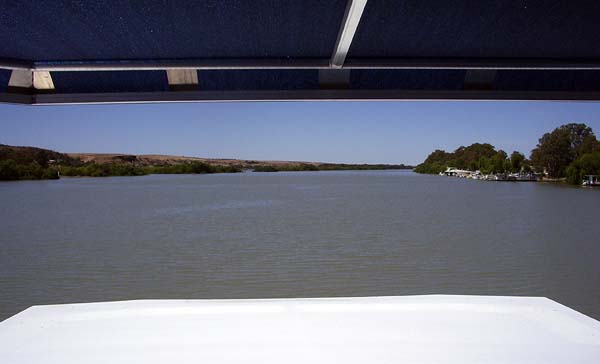 The view from the back of the houseboat as we cruise down the Murray. Note that there is still water in the river (and a few other things in it since we've left). 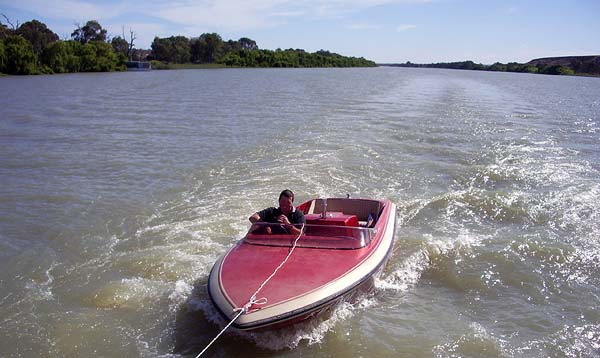 We proved our sea credentials almost immediately by rescuing this stranded boat motorist and then giving him a beer as we towed him home. We lost sea credentials when he pointed out we weren't at sea. 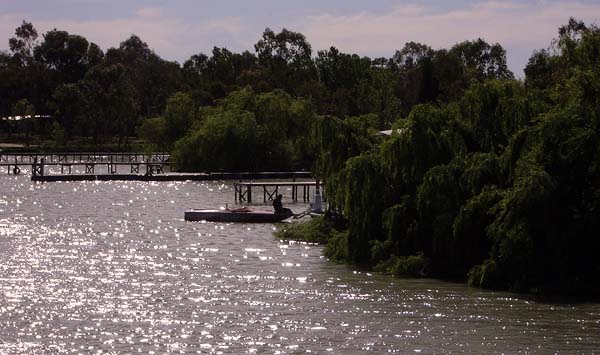 After being stranded in the middle of the river and paddling with a water ski for half an hour he said "You're documenting my misery" and I corrected him "No, I'm documenting our heroics!" The fact that I was wearing nothing but boardies and an admiral hat at the time was what convinced him. 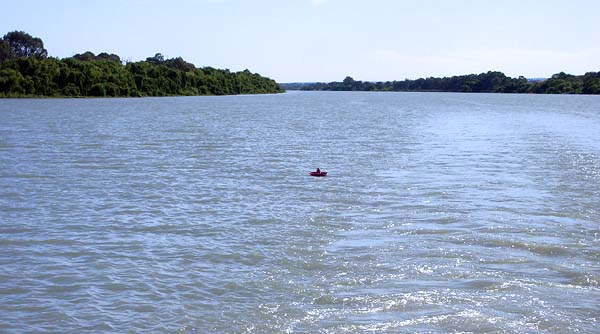 River Karma. Nobody rescued Scrivens hat. I could have, but I was taking photos. 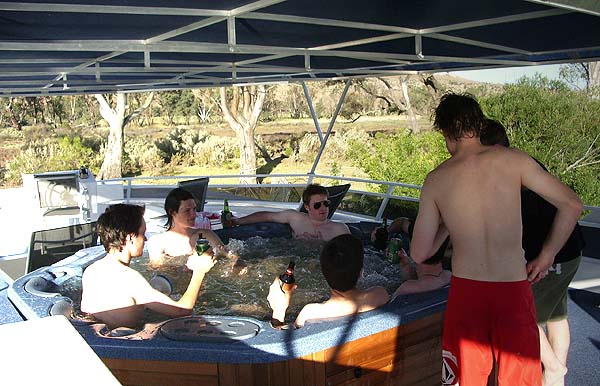 We moored in the river wild and all the hard work for Friday was behind us, now we could relax, spa, conveniently blackout during the nudity and wake up for cheese.

The Pressure of Exams Still Brings Out the Best in Me 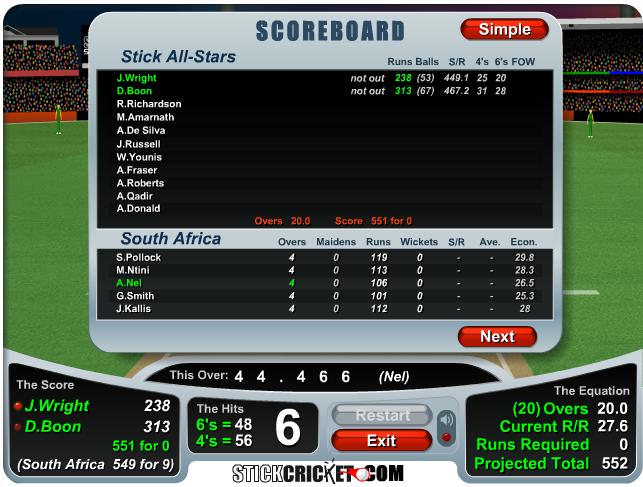 It Happens Every Year

I spend a few weeks in November trying to study for exams while every thought in my mind seems to be the best possible use of my time ever. I always feel there are so many projects or things I could be doing, but have to delay them for study. Then finally exams are over and I can't remember any of those brilliant, distracting thoughts and I end up just watching cricket and napping.

NOT THIS YEAR THOUGH

I have kept a list of all these important things I feel the need to do while studying so that when I have the time I can actually do them.

I Wish there was a Documentary about my Studying

I have occasionally been known to admire my abilities at studying for, and passing exams. Yesterday was different. Yesterday I almost literally ate a text book and shat it onto the pages of my answer booklet. Pretty much the only thing I wrote in 9 pages of answers that wasn't a word for word sentence from the textbook or lecture notes was on the last page where I wrote in big letters

I am also glad that the hard refuge trucks have come and taken away the rubbish so I can feel confident leaving my car parked on the side of the road again.

If you were a real boy you would be 5 now. And also in love with Charity and about to die to save her life so she could marry Miguel and rid the Earth of evil.

Violence Against Women? Australia Says NO

Message brought to you by the department of making the ads at the start of a movie awkward for everyone on a date.

I find it kind of representative of our current society that I couldn't find the actual ad on the internet, but I could find over a dozen badly made parodies on YouTube.

Today was an epic day. So much was acheived, it went on forever. I went to my first high school presentation assembly in 5 years. It was 5 years in the making and thus intensely boring. Do you know how many irellevant people can win awards in FIVE YEARS?

Epic day was ended with an epic 99 stock game of Smash Brothers, 1v1, both JigglyPuff, homerun bats only. It only takes 70 minutes to seal off a day like this.

Life is all about convincing people that you like crap music