A moist spring, and a few buckets of Seasol, have provided a bumper mulberry crop this month. The grass, and the bottom of my shoes, is nearly pure purple.

One of the benefits of this has been observing the song spreading around the neighbourhood that there's a good feed at the end of my cul de sac. The feathered friends that visit me are typically limited to blackbirds, starlings, new holland honey eaters and spotted doves. 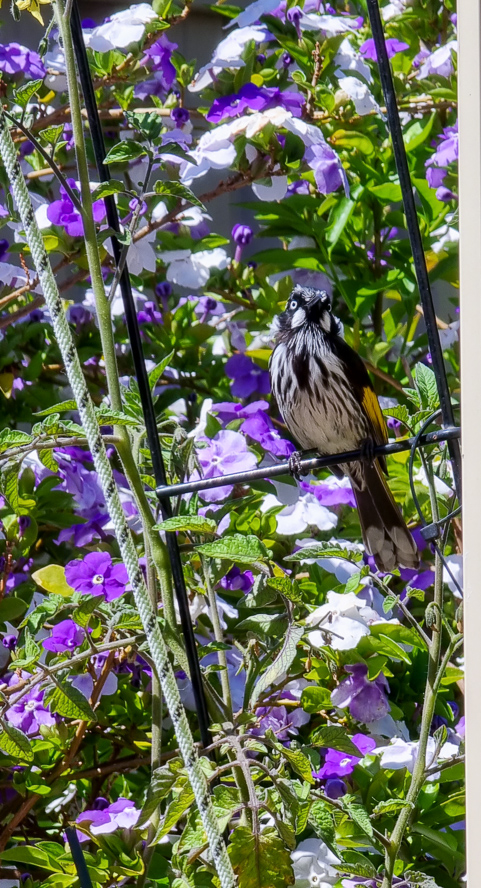 As the season has progressed I've seen willie wagtails, wattlebirds, house sparrows swooping in over the fence and under the canopy to shake berries loose. Every time I've felt stressed or square-eyed recently I've just had to sit outside and watch the birds fossick through the grass and fill their gullets. Often accompanied by Nash. 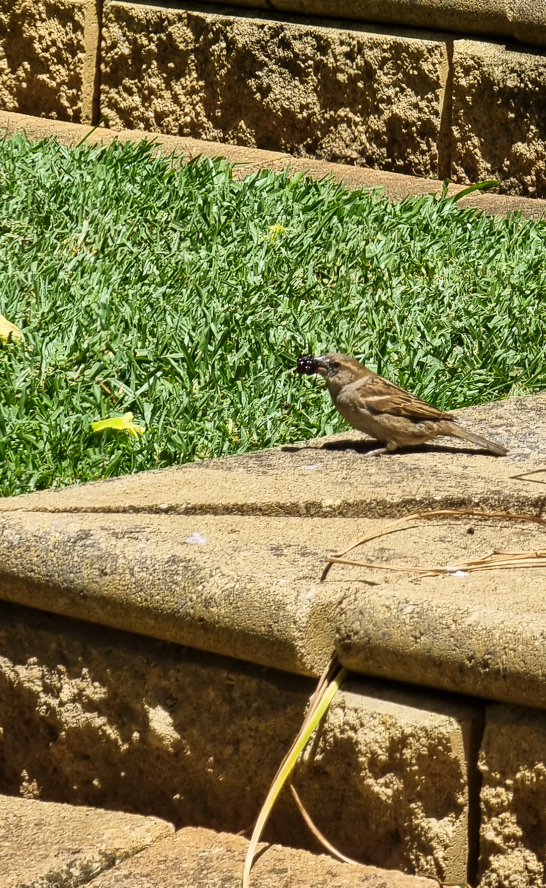 In the last few days I noticed what I thought were some kind of finches but were actually silvereyes - a bird I didn't even know existed! I caught a photo of one today. 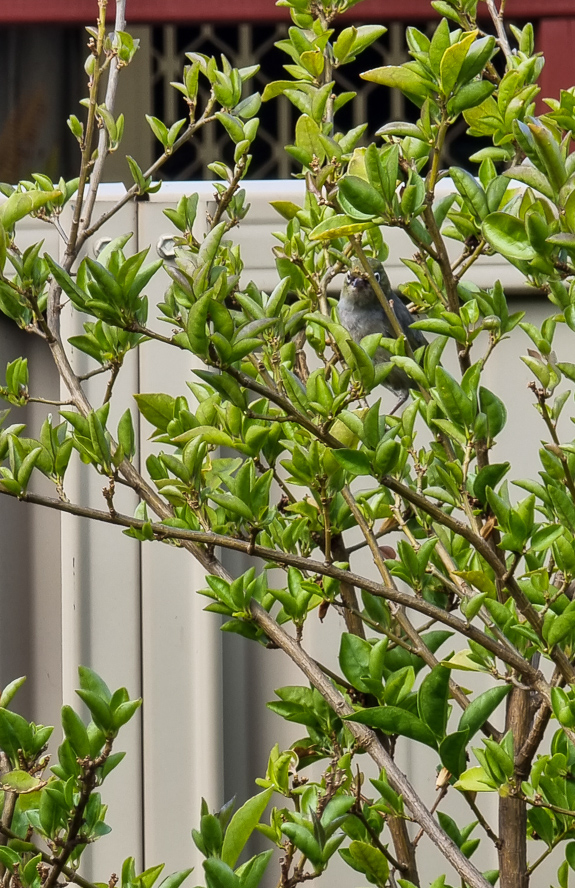 A baby blackbird has also been growing up in the backyard this spring. I noticed it as a fledgling last week as it hopped out the way of me and Nash in between its parents feeding it mulberries. It did not take many days of a high sugar diet for it to balloon up bigger than its parents. I got this photo of it when it landed on the wrong side of the pergola roof on its way out for more food. 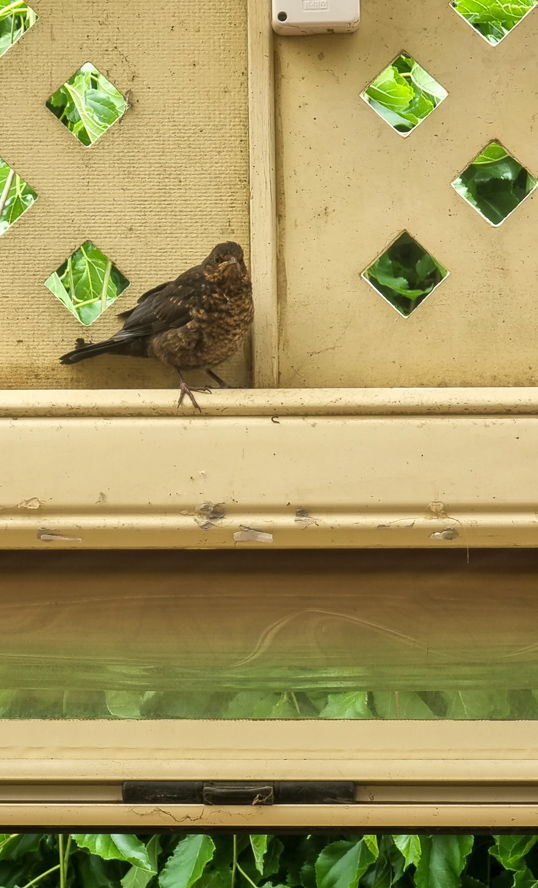 Maybe I was wrong to bemoan the backyard. Maybe the backyard is the best place in the world, and the rest of it is what I should avoid.

Right now one of my biggest fears is that, if I don't remember something that happened to me, then it might not have happened. And if I didn't do any things, maybe I don't exist? But a lot of the things I do don't seem exciting enough to journal about. They were exciting enough that I wanted them to happen though. So I'll document some of them here to ensure they did happen in the future.

I rode my bike to Semaphore and got a nice coffee from High Tide which I drank on the beach. 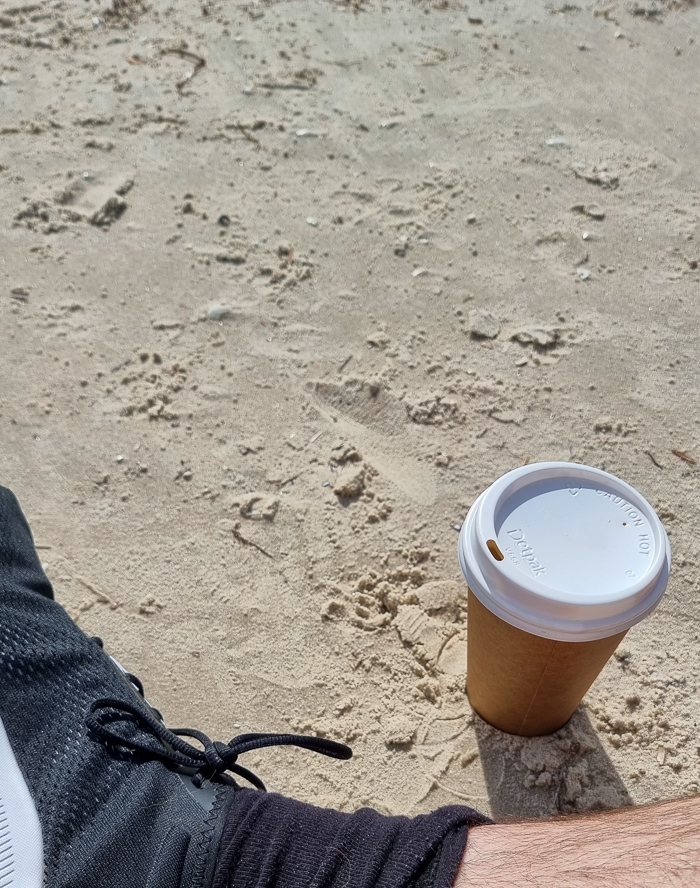 We went to The Archer in North Adelaide and I ordered the most expensive per gram steak they had for dinner because I could. I also got a free pint of Pirate Life thanks to OzBargain.

I saw Chow and he cooked me a double cheese burger and then we both lost Settlers of Catan to Alex. 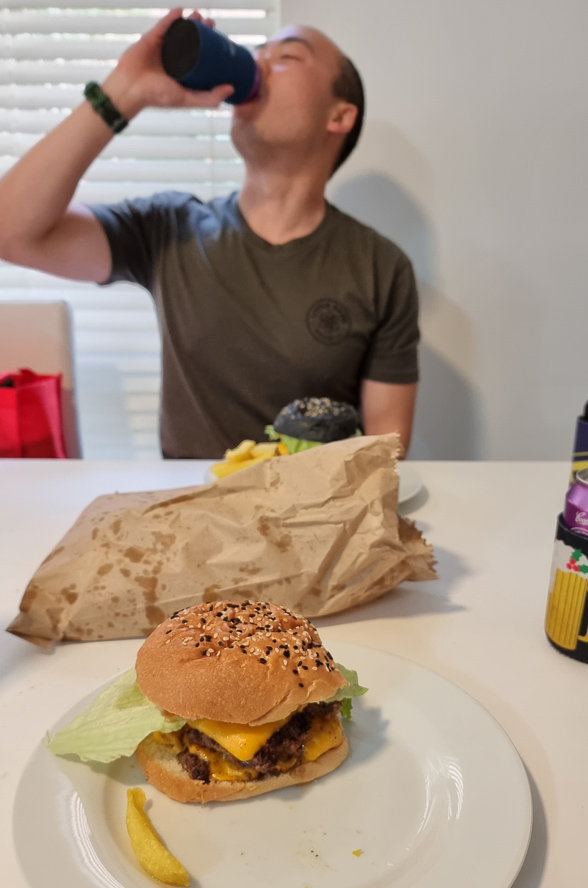 I ate two cherry tomatoes that I grew in the backyard.

I went to Semaphore with Vanessa and we walked on the sand in the sunshine. 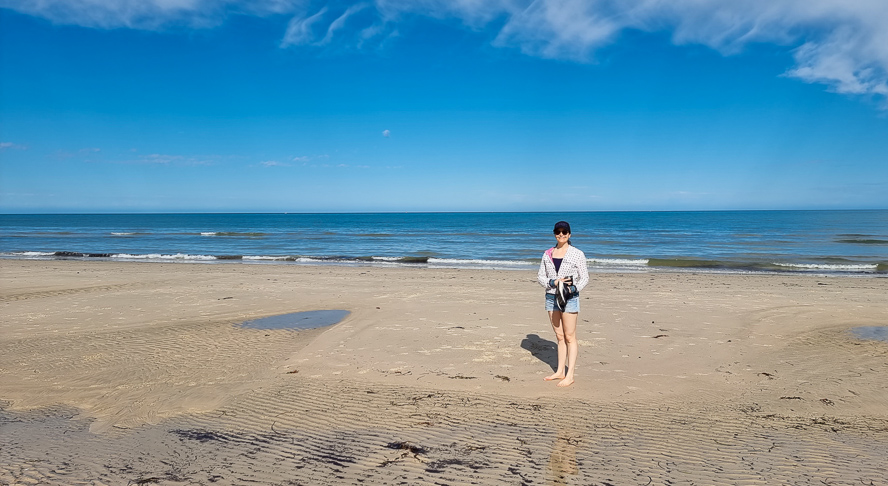 I ate a slice of the most Tim cake ever to celebrate Annie's birthday. 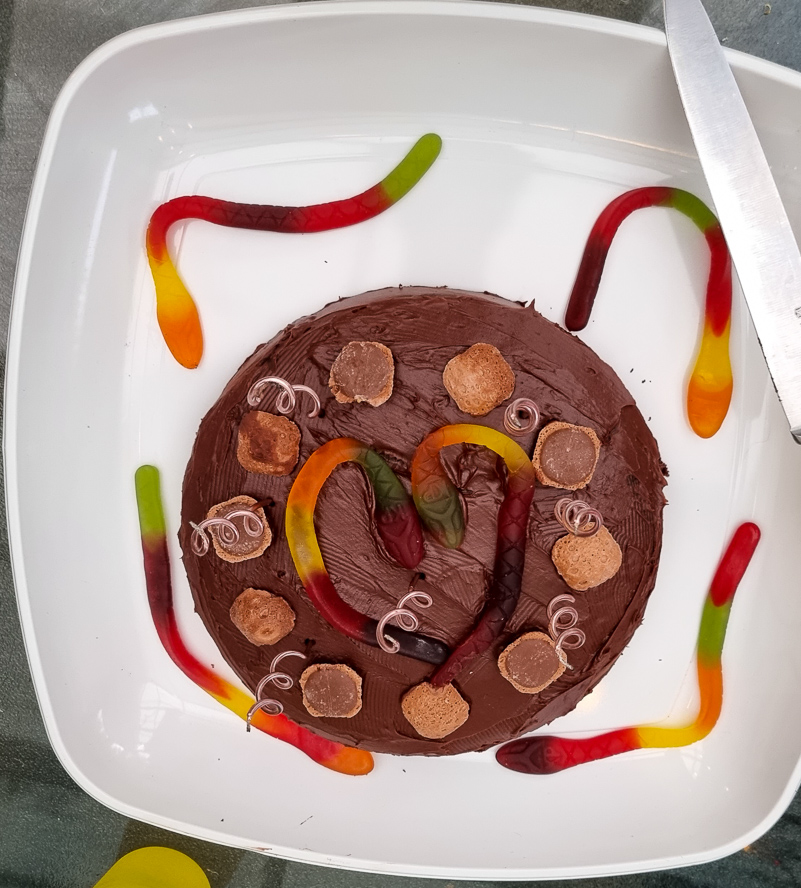 I wrote this journal entry. 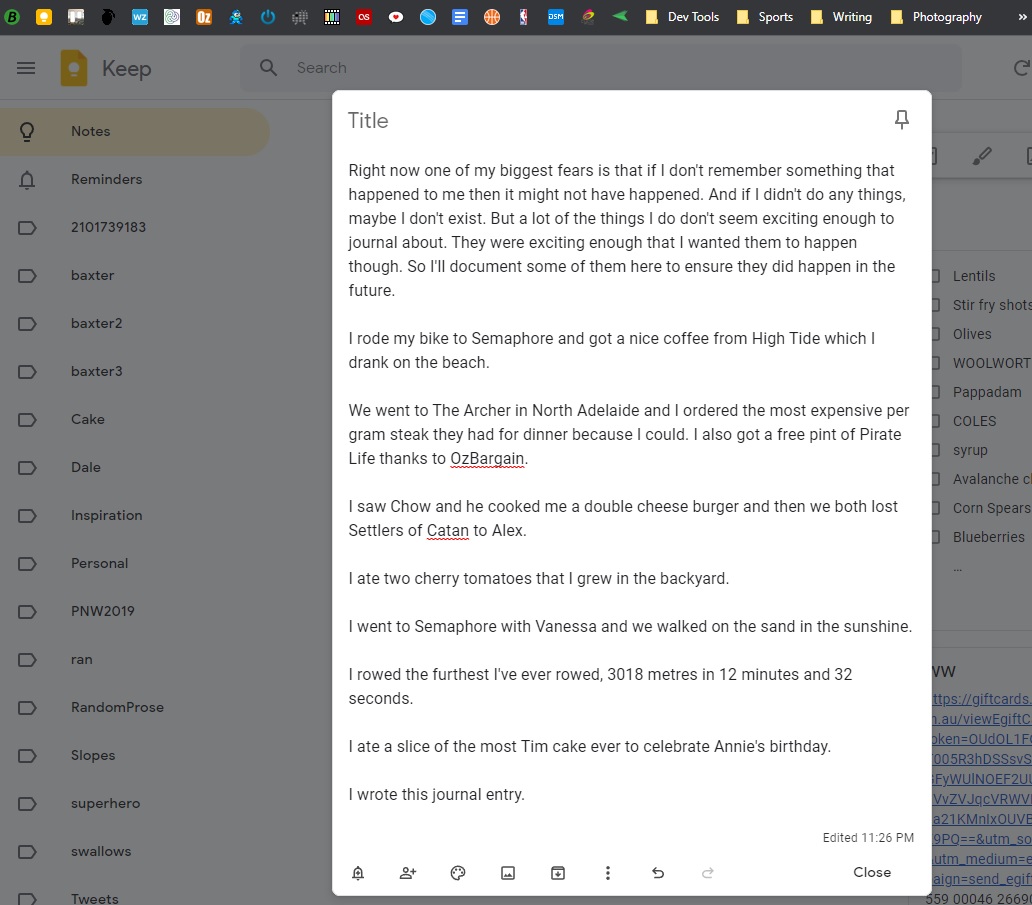 I had the dream again... I think I'm playing basketball, but actually I'm anesthetised, topping up the bank accounts of members of the ATO's top 5 income earners while they re-attach my tendons to the wrong parts of my skeleton. 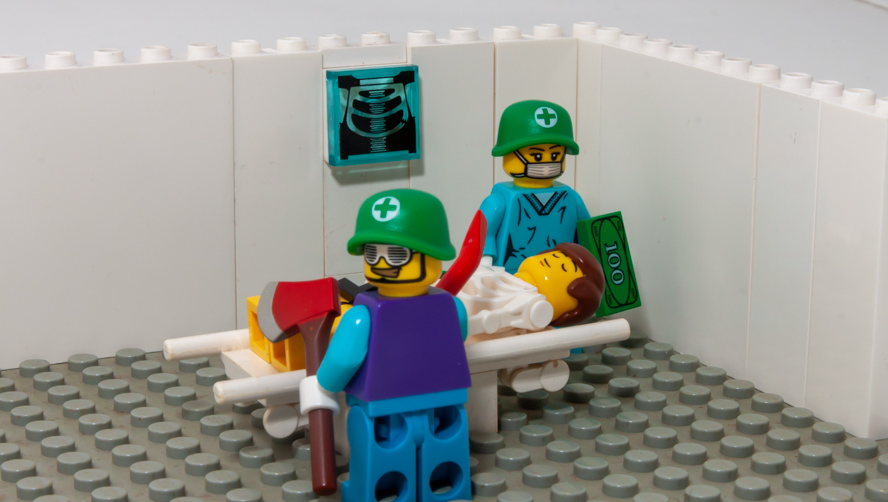 In the six weeks since I have been following the booklet of arm rehab advice. The exercises primarily involved using my good arm to swing around my bad one. 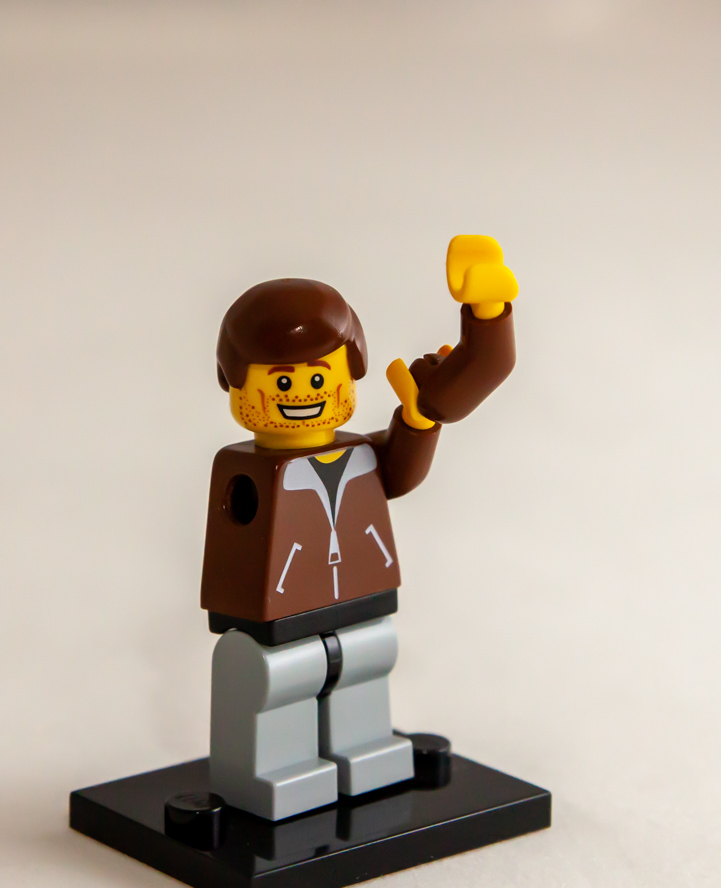 This was the shittiest beard I could find on a Lego head.


The goal is not 360 degree swivel articulation like the Lego dudes. I'd take what I had before back.

My favourite exercise was the one where I used a wooden spoon to push and stretch my arm away from my body. The physio couldn't have known that I would have the Official Bradism Long Wooden Spoon For Tall People in my kitchen.

Combined with my discipline for rehab, I quickly regained mobility and strength. After a few weeks I felt like I could win an arm wrestle against a toddler. 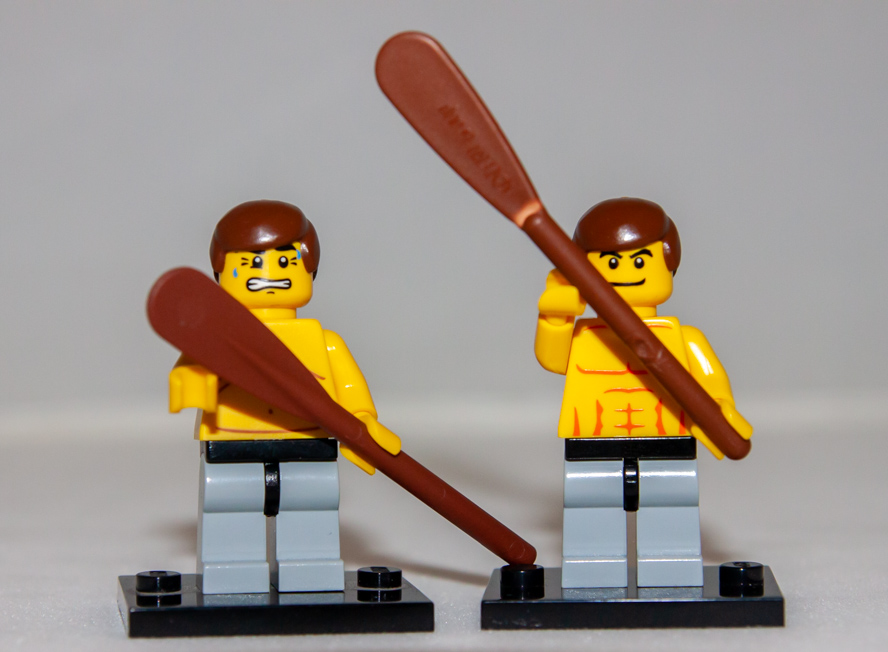 I saw my surgeon today who refreshed my memory on how good he was at cutting into people and re-attaching tendons to the wrong parts of skeletons.
Maybe I asked too many questions because he charged me an $8 gap.

I asked if I would be able to dunk a basketball after 6 months and he said yes! That will definitely make this worth the investment...

Sometimes I think I'm feeling nostalgic about those early days of rehab. Sitting in the backyard listening to audiobooks and drinking cups of soup. Watching NBA playoffs on the couch. Excused from having to work and write and exercise and needing to floss and (briefly) shave. In reality I know that nostalgia for days in pain is really just nostalgia for days in pain where I didn't also have to work eight hours a day.

Now the pain is starting to fade, and I can use the wooden spoon for its intended purpose again. I'm looking forward to a return to the gym and the writing desk and maybe the basketball court, and putting this behind me - which I can currently do to about 50% of normal range of motion. I can move on and embrace the future. Yay! 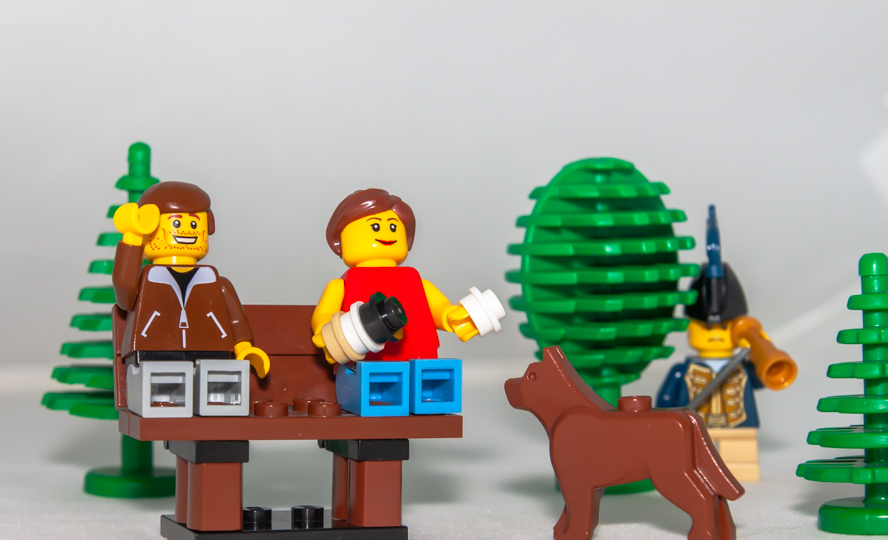 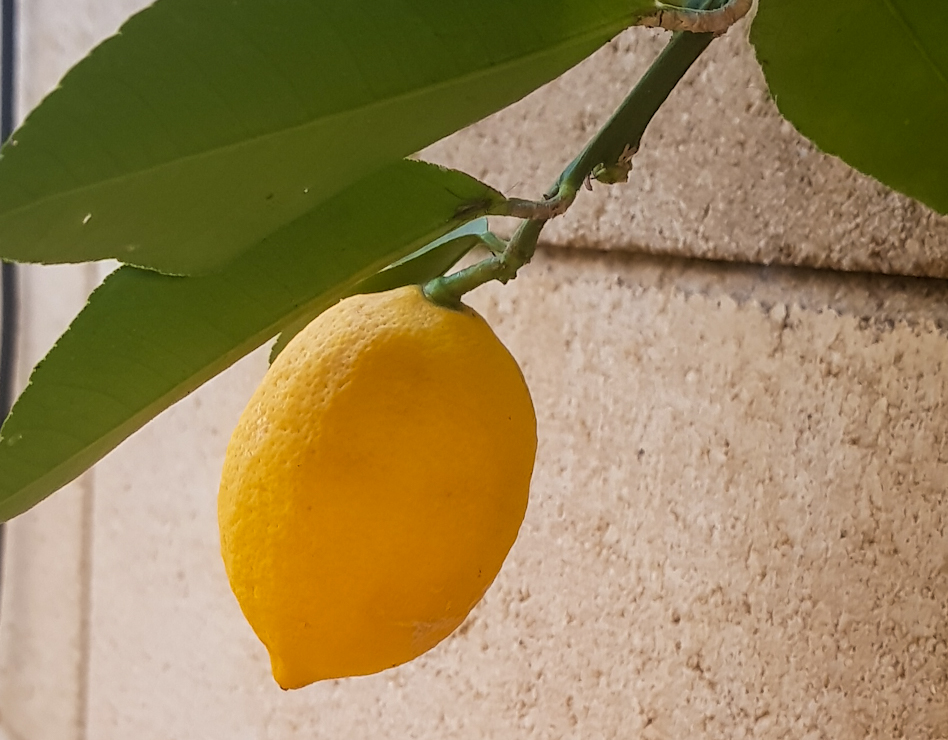 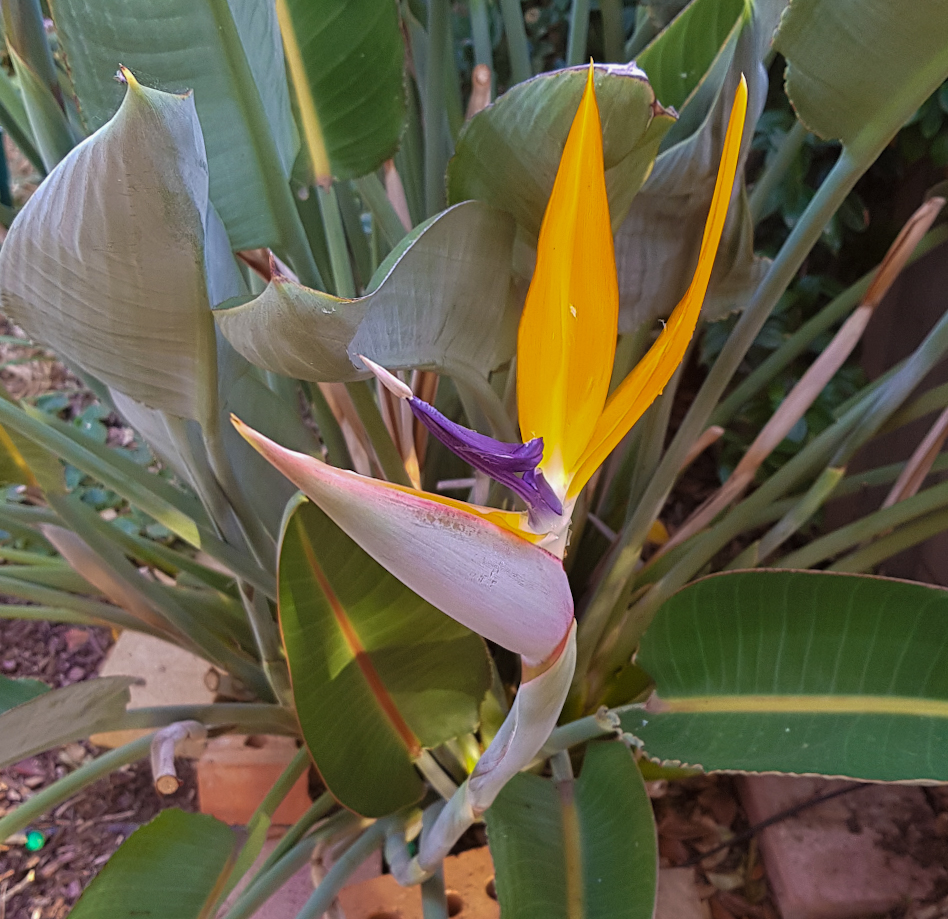 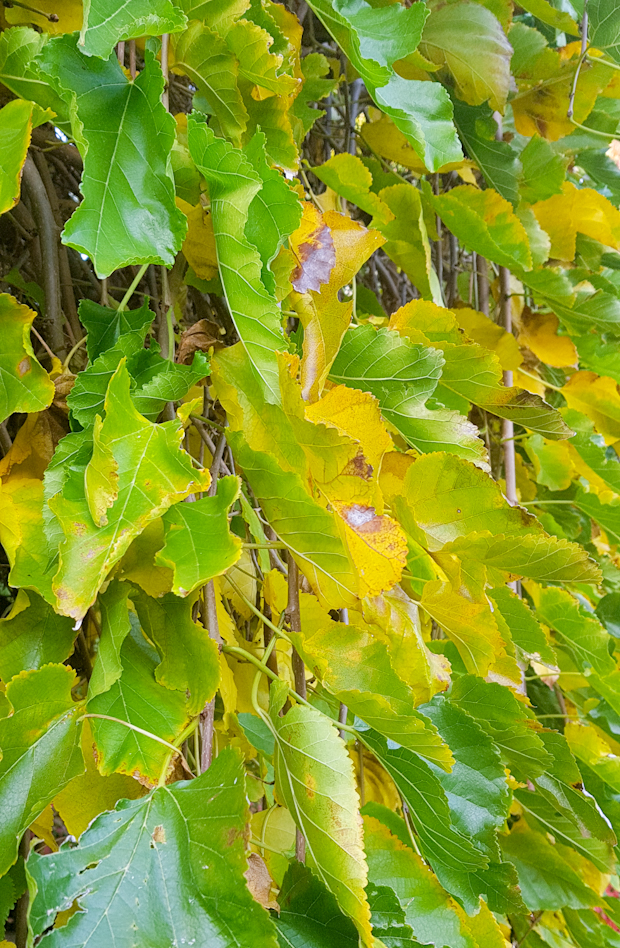 A short but sweet trip to some of the dog friendly attractions of the Fleurieu Peninsula. 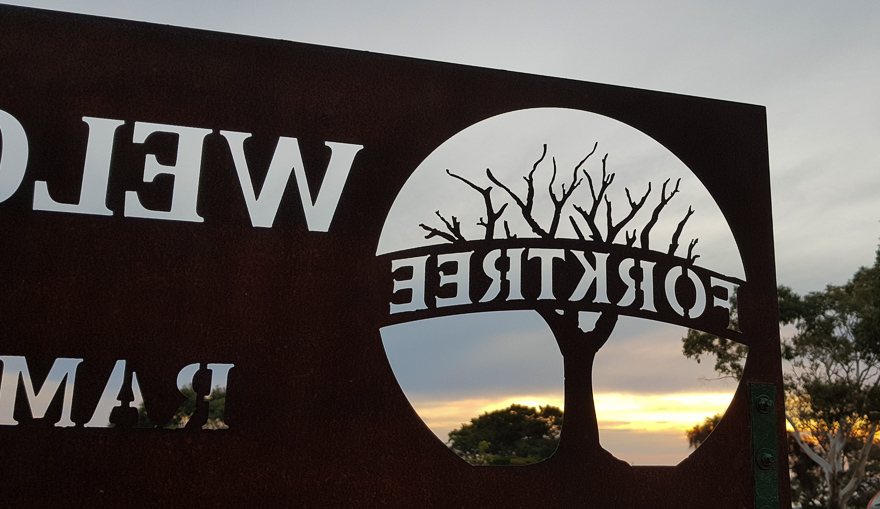 Friday Night - dinner in the garden at Forktree Brewing overlooking the ocean at sunset. 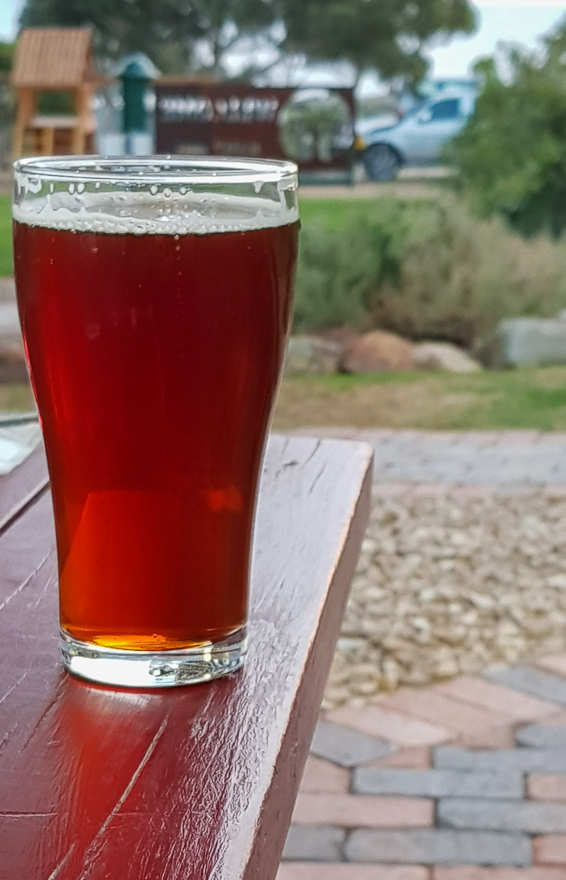 Starting the weekend with the appropriately named Sunset Amber Ale

Saturday morning, balmy and cloudy, a view over Encounter Bay after a sunrise drive through the backroads and hills. 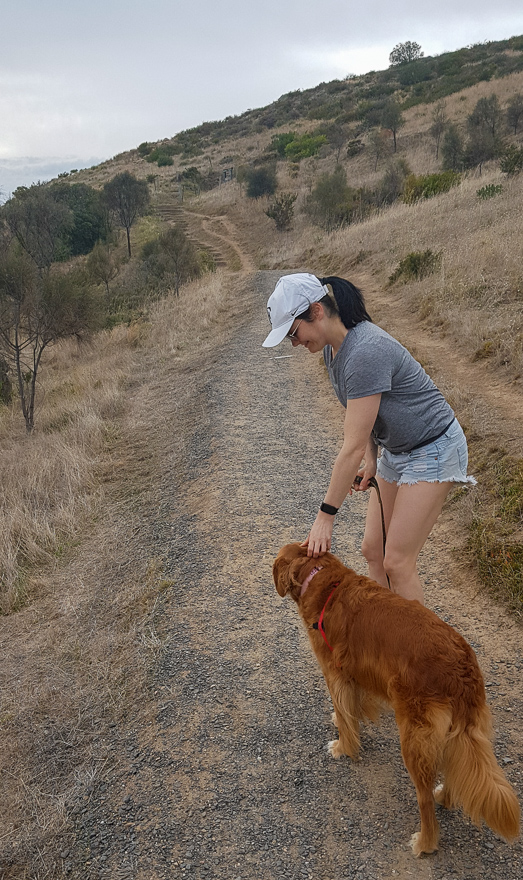 Nash gets a quick pet stop on the way to the top of the hill.

Top of The Bluff. The Victor Harbor Heritage trail along the cliffs led to some rocky beaches and pools. 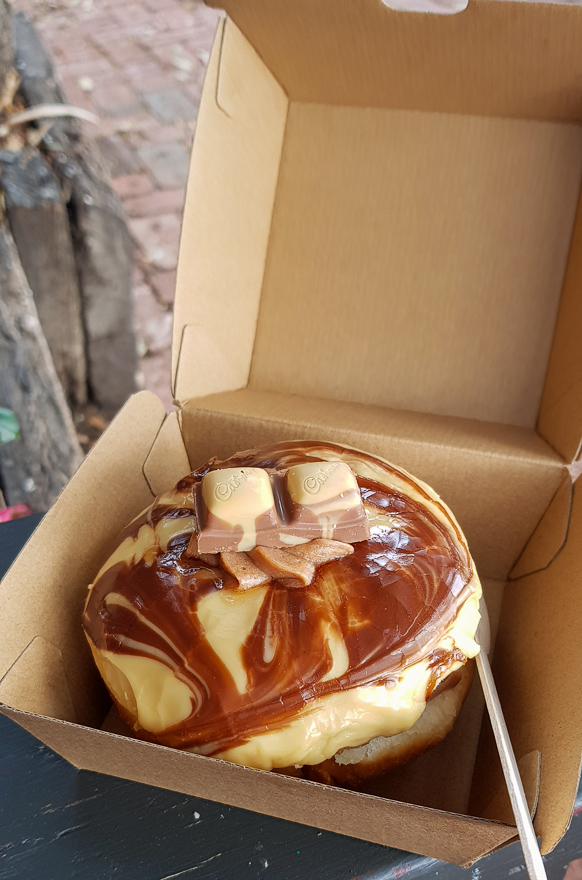 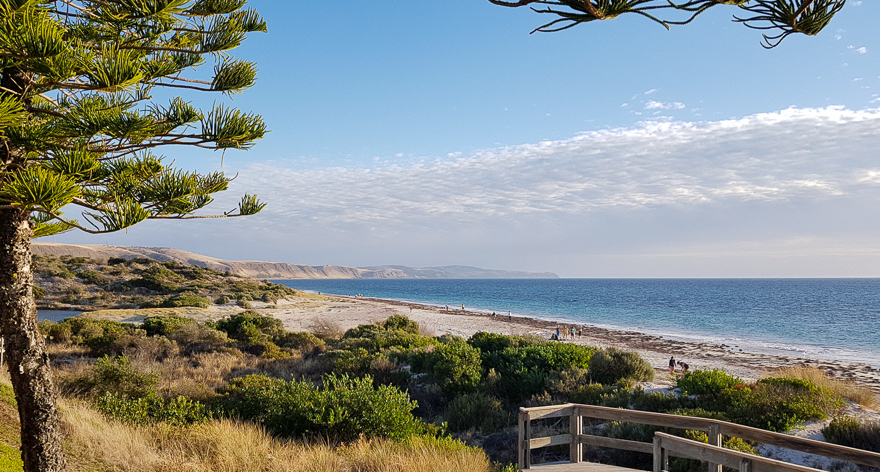 After a nap at the holiday house, a brief trip to Normanville for another walk and some late afternoon sunshine. 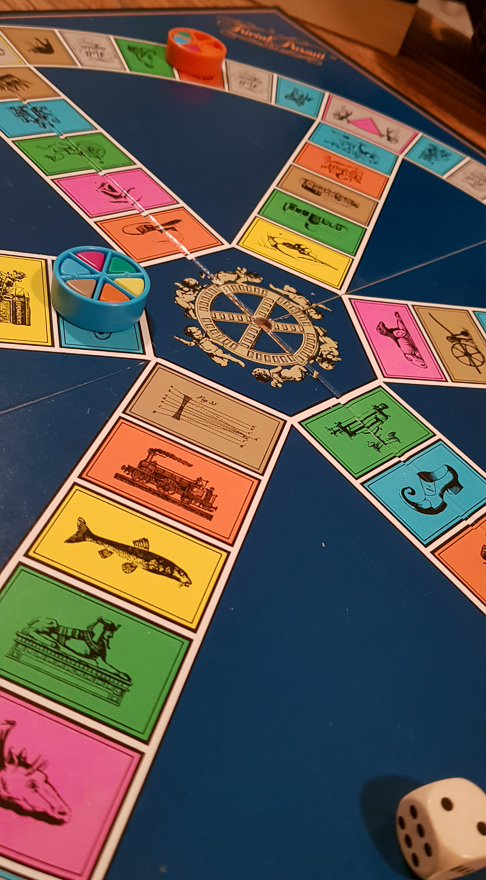 Saturday Night - the only board game in the holiday house was the 1983 edition of Trivial Pursuit. After three hours someone finally managed to answer a pop culture question.

Sunbody That I Used To Know

There's a point sometime in April... 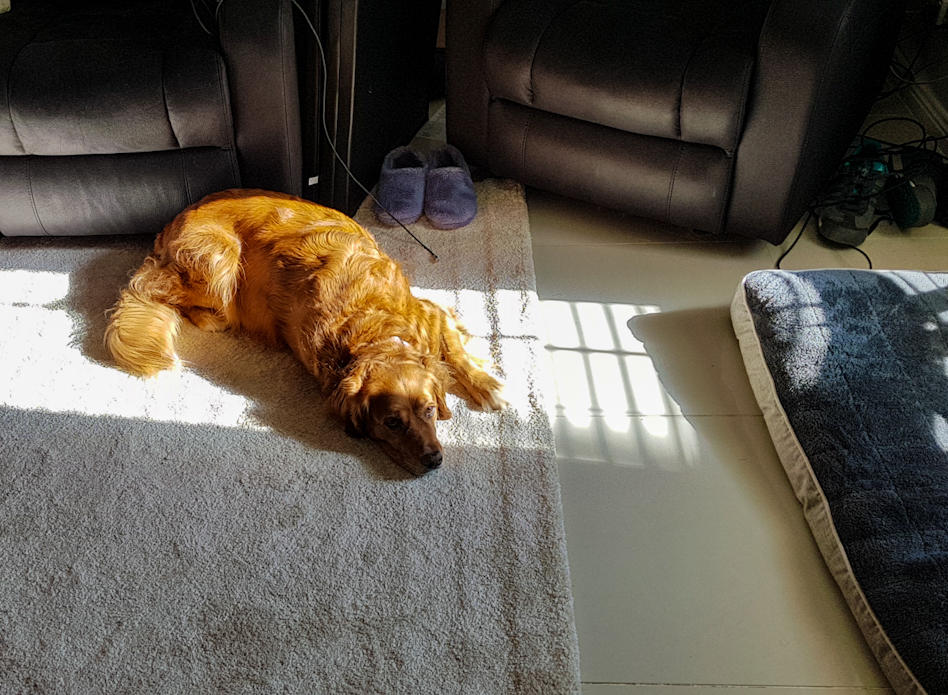 Usually around 8am one chilly morning... 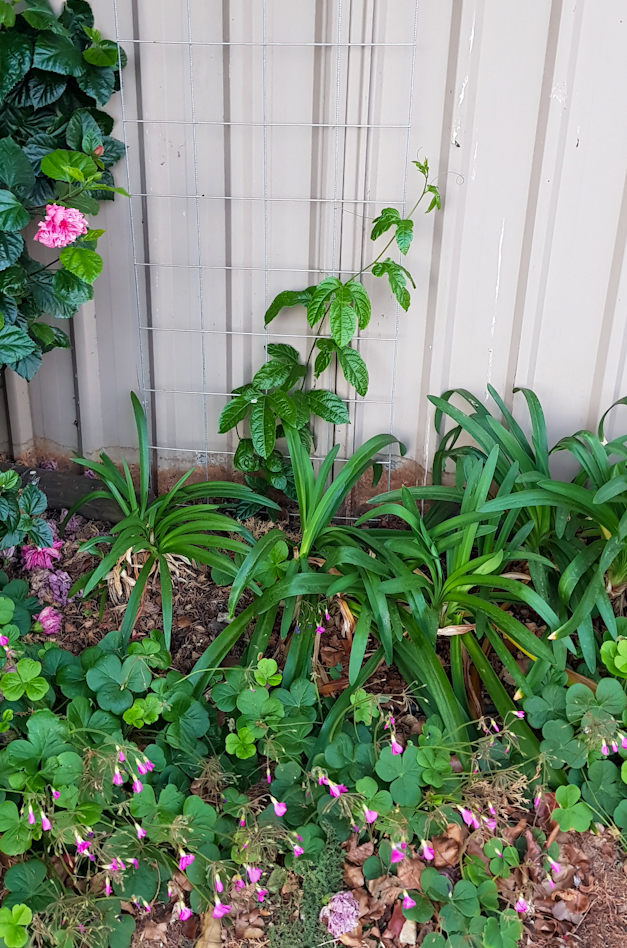 That the Sun becomes your friend again. 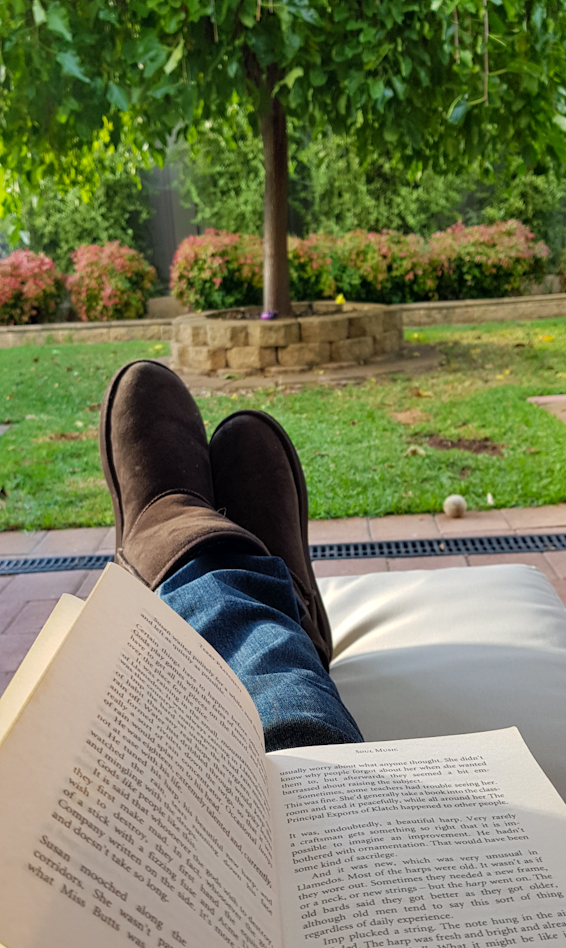 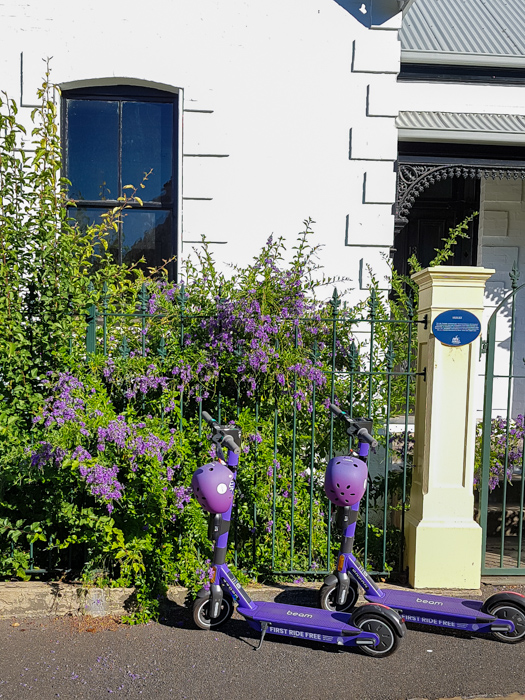 Every coincidence feels more meaningful after a big coffee on a long weekend sunday.
Add Comment 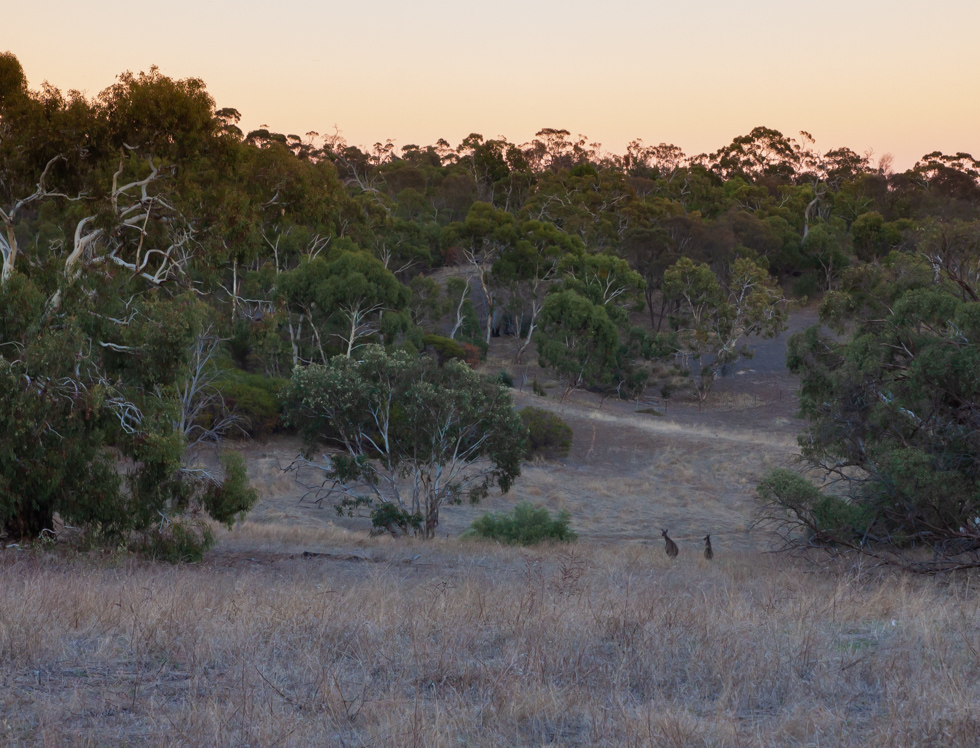 With daylight savings ending tomorrow night, and a "feels like" temperature of 14°C at 7am, not to mention a public holiday - today was the day I could sleep in the longest and be the warmest while watching the sun mount the horizon and drench the landscape in pretty colours. Yes, in June the sun will again rise well after I'm out of bed, dressed and potentially even on my way to work. But today it was a beautiful, bright autumn day with nothing better to do than find a nice place to watch our nearest star reappear.

Sadly, Adelaide is not the best city in the world to watch a sunrise. You have to drive a long way in order to escape the collar of eastern mountain ranges that shield the city from daylight a few extra minutes each morning. We chose to drive to Lyndoch, and take cereal and yogurt to the trails of the former quarry up Altona road. Also, the best sunrise colours happen before sunrise, so even if you get a bit of a sleep in you ideally need to be up and out about thirty minutes before the scheduled sunrise time. And if being up and about means driving an hour out of town then even on the best day of the year to see a sunrise you'll need to be out of bed before 6AM. 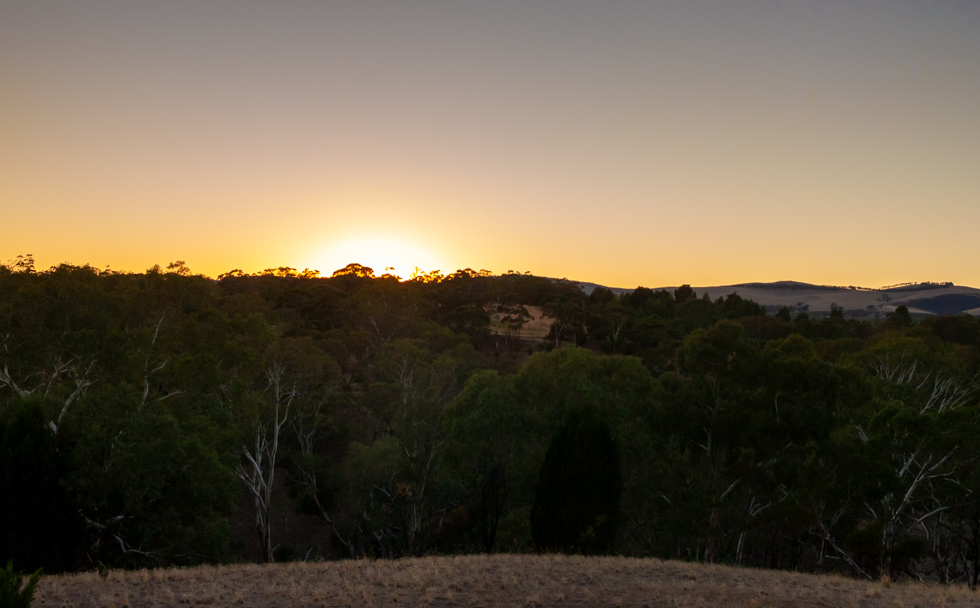 But imagine what time I'd have needed to get up in January to sit and eat breakfast at dawn at the same place. Or how cold you'd be in June. 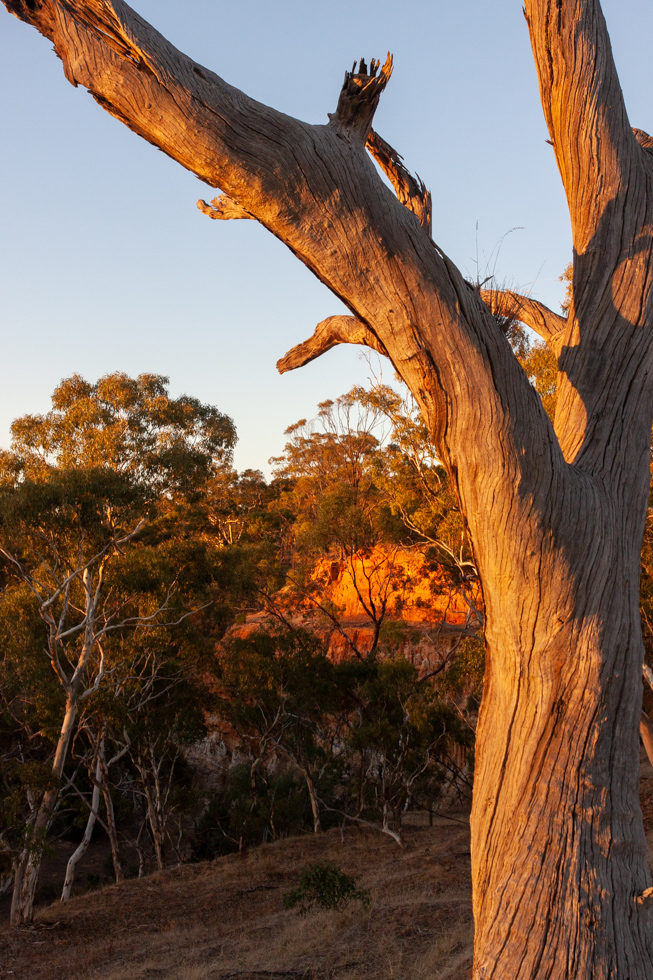 And don't worry if you missed it, tomorrow should be good too. Otherwise there's always next Autumn. 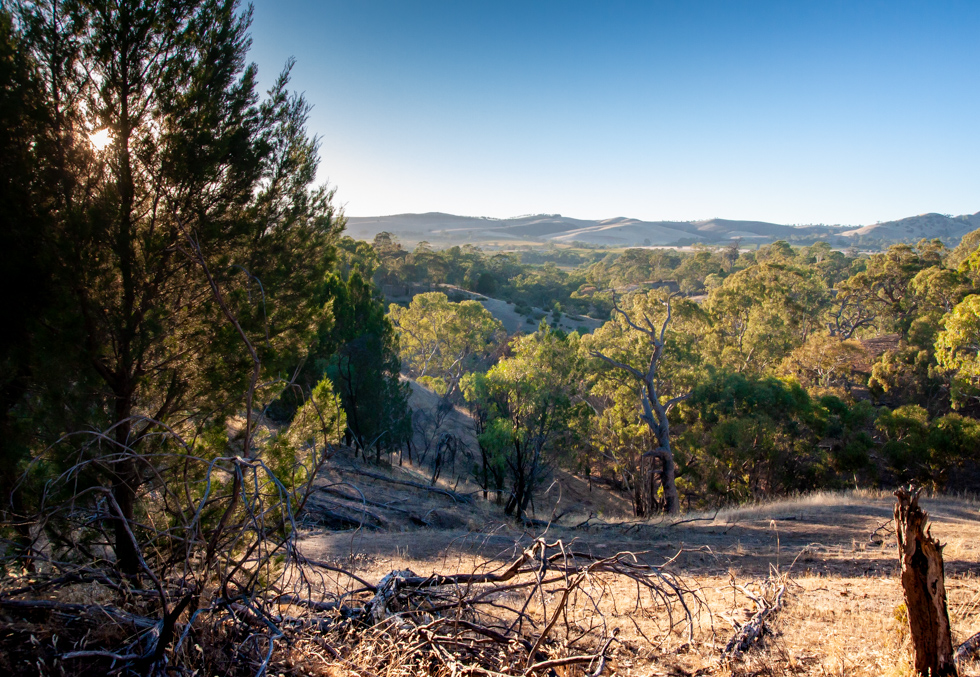