Streamer seems to only work in Firefox. I'll fix that maybe.

As promised, I deliver two months worth of Best New Spring Music in one giant article. With hopefully easy to use music streamer.

Jupiter One – Fire Away 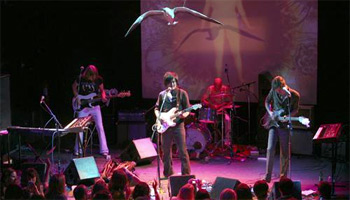 Fire Away
Jupiter One have an impressive array of commercial tie-ins given their freshness. Knowing that they've helped the scores for Heroes and Flash Gordon and advertised Mazdas and EA Sports before listening to their self-titled debut album prepares you for exactly how they sound... Commercial. Coming from a billboard adorned, multicultural hub like New York, they're a band under the weight of influence overload, and most of those influences sell.
The underlying canvas for Jupiter One is a new wave weave of star-wipe synths and punky guitars. Jupiter One sound like they've travelled back to the 80s to battle Devo and The Cars and have brought with them quad-core powered synthesizers, supercomputer guitars and some fancy brand of amplified future-drums. Or, basically what it would sound like if Flood and Brandon Flowers produced a contemporary Talking Heads cover album. There's definite attempt on The Killers style of digitally washed out guitar solos and 30-second-advertisement rhythm sections; the kind of psychological rock that makes you sway around feeling like you're creating nostalgia, and also feeling like you should buy a 7 Up. It's a lot like those annoying advertisements that grow endearing after a while.

Mr. Scruff – Music Takes Me Up 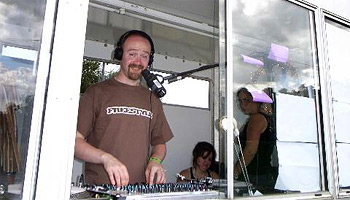 Music Takes Me Up
There's a producer named Mr. Scruff. He's pretty darn white, with a Manchester accent. But that hasn't stopped him juxtaposing hip hop and jazz for some of the funkiest and hottest tracks over the last decade. Probably best known for Get a Move On, the delightfully titled new LP Ninja Tuna – his fourth on the still consistent Ninja Tune label – contains plenty of similar, upbeat lounge hits. Music Takes Me Up kicks off the album with the soulful vocals of Alice Russell riding over hi-hats and jazzy, scruffy funk. 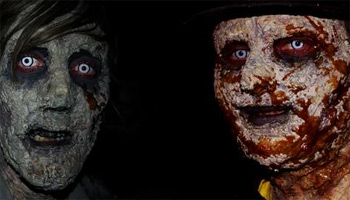 Dead Man Coming
Music since the dawn of time has changed a lot. We've invented ReacTables and we dance around in front of lasers and strobe lights on giant pyramids. A fair change from the lurching around campfires in loincloths and ochre we used to do to simple beats. But the one thing yet to change in music is its most primitive component: rhythm. Drums have a ceiling of sophistication and nothing seems more natural to bop to than a steady, cadenced thudding. Without heavy pounding on different shit, music wouldn't be worth listening to.
This is something Evil Nine know pretty well and 2004's You Can Be Special Too introduced their very simple trademark pounding break, normally accompanied by some sort of post-punk guitar hook and sinister synth. All their works, compositions and remixes, are easily identifiable but it's no criticism to point out their drumming always sounds similar. That's the same as dissing a collection of Monet's because they're all done on canvas. It's what Evil Nine do with a drum beat that makes them successful, layering over it disco synths or lurking dub frequencies or turntablism. One of their best jobs is selecting vocalists with enticing timbres to salt their tunes. Whether it's the NYC grit of El-P, the Taylor Dane wannabe Emily Breeze or Dead Man Walking's reggae monologue from Toastie Taylor they all have one thing in common. They want to be played loud. 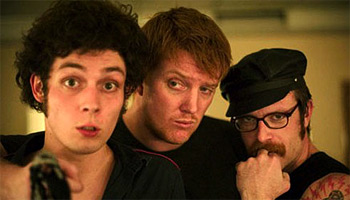 How many sugar packets are you allowed to take when you buy a coffee from a coffee place before people (say, co-workers) deduce that you're not going to be using all of them for your coffee and instead will be supplementing your own pantry with them?

Last night I saw the movie Death Race which is, contrary to my original beliefs, based on the 1976 film Death Race 2000 and not the 1996 Remedy Software game Death Rally (although it is worth noting that Death Race was a working title for Death Rally and the original film made up probably a smidgen of the inspiration).

Death Race the film really was just Death Rally the game made into a motion picture. The movie was 75% racing/shooting scenes and even stooped as low as having power ups that appeared on the ground around the track that drivers had to speed over to collect. Essentially it reminded me of an afternoon I spent at a primary school friend's house in early 1997 where I was forced to watch him play Death Rally for 2 hours while I occasionally interjected with "Can I have a turn?" between races and him replying "soon". I only had 4MB of RAM at the time ranking me towards the bottom of our friendship group's caste system.

By the end of the movie I was struck with the idea that it would have been more entertaining – and much cheaper – to have just downloaded Death Rally and played it for the same amount of time. This idea was remarkable given the movie was the type to numb the brain. So today I did that and while I may not have reached the intermediate stage yet I am close financially to upgrading to a cruiser although I do have spikes bolted to the front of my VW Bug that should help me out the next few races.

Signs I Probably Wasn't Ready To Move Out

Enya has been hovering a while on the outskirts of my top 100 most played artists on last.fm.
People seem to find it surprising that I have an affinity with the Celtic songstress, which peaked recently when I got excited about the leak of her new album And Winter Came in a few places. It's not a great album, but it's kind of good. It's like a cross between Watermark and a CD of Christmas carols. OK, what it sounds like is not important I'll undoubtedly include it in a review post later. What is important is that Enya seems to be seriously under-appreciated by young people.

When I was in year 5 we had a strict but loving but very strict teacher who cultivated independent learning by allowing talking during class "as long as I can still hear my music" and every day she would play Watermark at the lowest audible level possible. For years I disliked the opening bars of Cursum Perficio as they brought to the surface a deep seeded, childish anger. But come the end of my final year of uni where I was doing a major assignment at the last minute for about 3 months straight I somehow managed to conjure Watermark onto my computer and used it's conditioned response to complete many IT essays.

Also someone once made a cool mashup of Orinoco Flow and the Prodigy's Smack My Bitch Up which I think is what motivated me to download Watermark in the first place.
Orinoco Bitch

Is it time for a backup today?

On the way home from basketball tonight (I hit a 3) I stopped by the supermarket to buy the food I needed to last me through the week, which happened to be limited to just bread and milk.
As I approached the checkout chick to distract her from a sunset I felt like a self-conscious stereotype. So I bought some gum from the impulse purchase rack next to the checkout as well.