I Saw A Rainbow

This morning, after thirteen weeks of waiting, I was heading straight towards grey skies down Henley Beach Road to my first wrist rehab appointment. I was stuck stationary in my car as people on their way to work organised a majority to oppose those on their way to the beach. It was there, waiting as usual that I appropriately saw a rainbow. It was bright, stark and colourful and through some pleasing coincidence it did seem to be arching across my left shoulder and crashing to earth somewhere around Grange road's arrival at the seaside where my appointment was scheduled.

The rainbow itself wasn't completely surprising - my car had been covered in water when I opened my front door earlier - but it was to me like a delightful punctuation mark on the latest chapter of my wrist story, if only someone a little bit more fruity had been left in charge of standardising the Anglo alphabet.

Nevertheless some seventy dollars and twenty minutes later I was on my way to work buoyed by nature's gentle, reassuring prod. That rainbow wasn't the most exciting thing to happen today (I also discovered that Woolworths sell chocolate Paddle Pops in a 32 unit "Family Pack" and they're on special this week) but it sort of indicated that maybe the world was swinging back to my side. And that not all freak acts of nature would end up with me missing a year of basketball. Sometimes the universe would just focus on being pretty.

So, for one moment in my car this morning everything seemed perfect, or at least well timed.

Later in the afternoon I saw two rainbows at once which I believe cheapened the whole experience slightly. 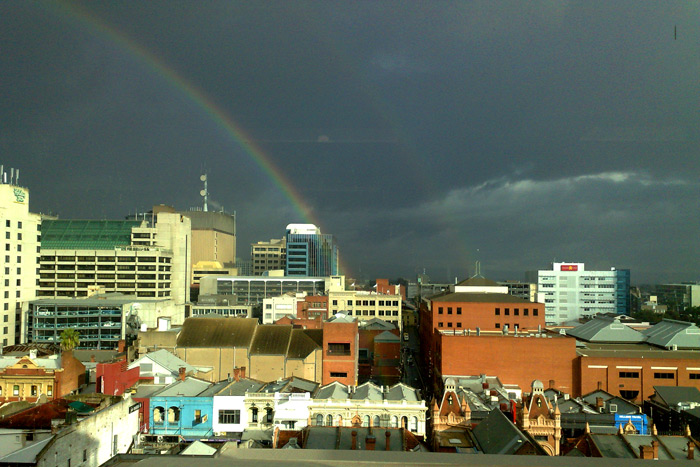 Since starting my wrist rehab I've been told to stop wearing my wrist support and start getting used to having nothing keeping my arm connected to my hand except skin, tendons and muscles. This might not seem like much of a big deal, but after almost six months of having my wrist wrapped up by something velcro-y or sharp, or sweaty or pink having my arm free for a couple of days straight has felt amazing! Unconditioned muscle pain aside that is.

It was perhaps fitting that that the man who made me that first pink wrist splint last December was coincidentally the one told me to free my wrist two seasons later. Then he gave me a 1kg purple dumbbell. I'm sensing a theme with this guy...

I have now begun my re-strengthening process, which I currently treat as micro gym. It's like regular gym was, but on a tiny scale - sort of like a model railway to a real world public transport system. Every day I get to do a tiny number of sets with a tiny number of reps with a tiny little weight to work tiny little muscles. Afterward I drink a tiny protein shake, but I wasn't told to do that last part it was just for lols.

I'm still six months (minus three days) away from having a normal wrist again. And there's still a danger of overworking the unhealed joint and undoing the work of the surgery. So I'm just doing the minimum for the moment and then feeling shit scared about any pain I feel afterward. I'm keeping it micro-scared though.

There's a Woolworths I shop at in Adelaide, not far from where my brother was born. On a cold Tuesday night not two weeks from solstice a blonde teenager who looks about the same height as me but most of a decade younger pulls cans of fruit out of recycled cardboard and slams them onto a shelf. When he looks at me passing with my trolley he doesn't see that five years ago I was him, filling aisle one with halved apricots and two fruits from what theoretically could be the same cardboard box as the lightest of rains seasoned the midst of an evening. And I was as ignorant that night as he is now to the fact that very moment somewhere in the sky an airplane is carrying people important to someone into the airports of the Middle East to be deployed into wars and occupations with view to protecting the very Woolworths we worked in.

To define the word 'protecting' I do not mean the literal defensive from terrorists and insurgents pointing homemade RPGs at the new self-serve checkouts. This protection is more separated, in the way of building hospitals, stifling dissent and educating the untarnished to weaken the strength of the potential terrorist talent pool much like a 17th AFL team loaded with draft concessions. They're not defending borders as much as earlier diggers, but they're protecting the same values which strengthen the same share prices of companies like Woolworths, which misleadingly closed today down 11 cents most likely because these deployments are conducted with stealth and not included on market reports.

There are plenty of viewpoints to have about wars and wars-by-name, but I'll say this: I'm glad I live in a country where I can have viewpoints about all sorts of shit and that the primary sort of brainwashing and conscription that exists involves me spending more money on brand name products at worst. I also want to read my brothers memoirs after he gets back.

I gained 10 kilograms in one lunchtime

It weighs 9kg and I carried it from Rebel Sport in the Myer centre all the way to my office, not easy in its unwieldy box and with my one hand.

Faced with having to walk it the 3kms home I decided at the end of the day to just wear it under my business shirt for the trip. It came fully loaded with weights and I couldn't be bothered pulling them out and putting them in my bag. So I emerged from the disabled toilet and commenced my 110% bodyweight stroll through the west parklands thinking this would be the only good day ever to get stabbed.

When I got home I asked Matt if he thought anything was different about me and he tossed up between "increasingly sweaty" and "wearing a bullet proof vest with a Hit-Me-Baby-One-More-Time midriff".

After the walk I went straight into some pilates/jump training. I can jump just as high while wearing the vest, but not as many times.

Then I went to Alex's basketball game and shot between every quarter using two frickin hands for the first time this year. Lefty still isn't functioning quite that well, but it's helping and I actually shot a higher percentage than I expected. Perhaps all the daily visualisation of shooting has helped. I CAN SHOOT!

I had extra meetings at work today and I decided it would be a good opportunity to try wearing something more formal than jeans to distinguish myself from my peers. I also hadn't shaved for a couple of days and thought pinstripes and a collar might distract away from this. Unfortunately I was pressed for time and didn't have time to iron a shirt (note to self, pun should come after subject).

My solution, a long-sleeved cotton knit! Underneath it I wore a tucked in, un-ironed shirt whose only presence today was to peek its intelligent looking collar about my neck. The knit was also long enough to cover my waist so I got to skip my belt today too.

I was thinking about writing a book about how to save ridiculous amount of time with tiny hacks, but all I've got so far is this, pelvic-floor exercises while waiting for the microwave and "live within walking distance of your work".

Also, in the future I envisage a HUD sort of like a late 80's SEGA Lock On headset that would allow you to RDC into your desk so you could start checking your emails as you walked to work.

I Live in North Adelaide Now

- Nice walk to work
- No Internet