It's hot and humid here in Engadine. Not as terribly tropical as in North Queensland, where every kangaroo that wasn't tied down, sport, probably ended up being hurled into a banana tree by tropical cyclone Yasi. But it's sticky and has been all week in our new home. So we decided to beat the heat and hide at the local mall in the air conditioned cinemas.

We saw The King's Speech which I was quite keen for after reading a few reviews. Unfortunately it seems my brain had a little hiccup and while I enjoyed the first ten minutes of the film I was quite anxious for when Colin Farell was going to appear on the screen and how his accent was going to fit in with all this. Once I realised Colin Firth was a different person I was able to relax and enjoy a well executed and acted film, the value of which really hit home when the first thing I saw leaving the theatre was a large poster for Owen Wilson's new movie.

As we returned to the car I grimaced in anticipation of hot night air. But by then it had cooled nicely, we had beat the heat Boston style.

Petition to rename it Spiderdine

I went for a walk this morning and even though it's still summer there was a mist of dew covering the ground and in the trees.

Then it turned out the dew in the trees was mostly spiderwebs. 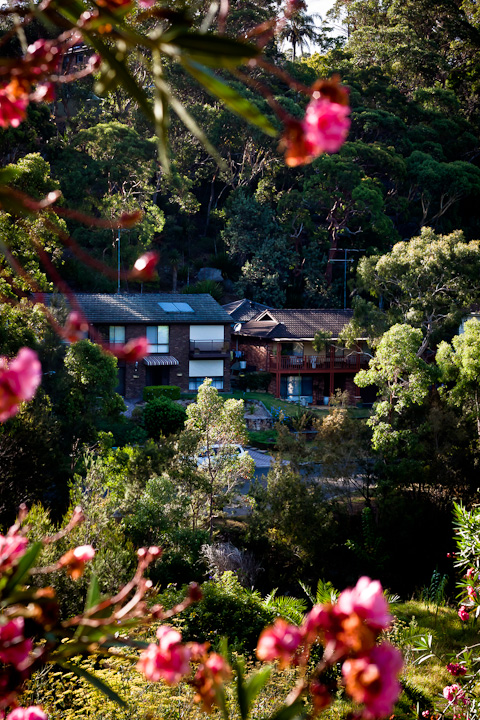 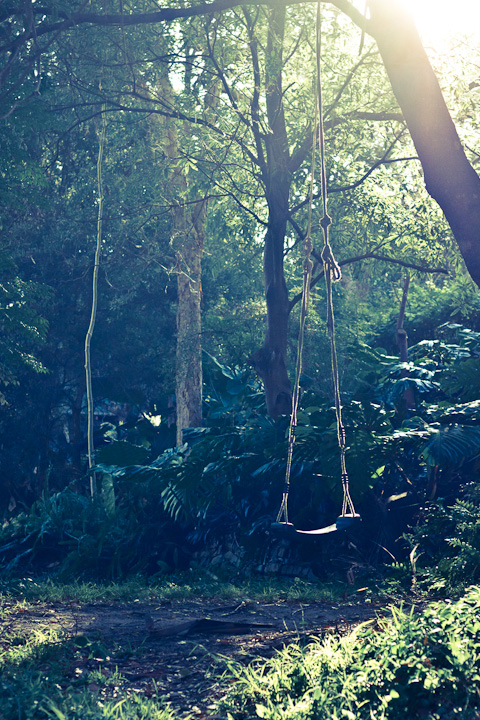 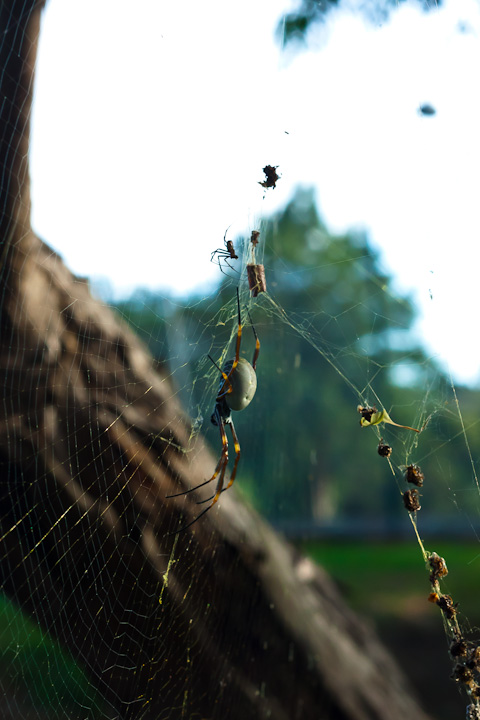 A Preview of the Previewer

For a while now, basically since I started posting photos instead of writing words, I've been aware that the megabyte content of my journal is becoming inappropriate. On a good day, such as right this second, it's almost three megabytes and seeing that the majority of you are probably refreshing constantly that is a major drain on your bandwidth (assuming you've disabled the automatic caching in your browser just in case I make a subtle adjustment to one of the images in an old entry.) It certainly makes it more of a drag to view on your phone anyway, which is what I had to resort to in order to produce some heroicly long entries before my internet got reconnected in NSW.

So for a little bit less than a while now I've been wanting to implement some sort of image previewer plug-in that would load images in an entry individually and provide thumbnails for browsing. And finally I did bother to write this, me telling people that I was a programmer motivating me to actually program. And after some crucial breakthroughs while coding on Saturday night - a time period where so many of this website's awesome features have been developed - and then several hours of bug fixing later, I have created... The Previewer!

Soon this will be showing up in entries showing all new pictures, instead of the random ones I am currently using to test it. Until then I thought I would post about it in case anybody has feedback to offer about its looks and function. And also because I'm so queer with pride that I made something in javascript with Ajax that actually works pretty well.

I have been living in NSW for a month and a bit now. I don't feel that different, not that I was expecting I would, but changes are occurring: The Princes Highway, my first impression of it was akin to a wild river; an unrelenting flow of traffic that would keep me pinned in Engadine. That turned out to be a little melodramatic. It's so quickly become my new Shepherds Hill Road.

The first of many replacements. All my hairs have been cut by Sydney scissors. Royal National Park has become my new national park. My Woolworth's experience is essentially identical, as they tend to be uniform across all of Australia except for the one I went into at Miranda briefly which was frozen in time somewhere around 2003. They still had the old style cardboard signs above each aisle indicating the contents. One included "Videotapes".

In this new environment I've successfully increased my creative outputs. I written more prose, read through three novels in the past couple of weeks and the previewer seems to be a feature vacuum that I can't stop feeding. I even sewed a little. I haven't taken many photos but that will change as I become more familiar with my environment. I have taken my camera into the bush a few times but I am just about sick of the colour green.

Nothing will make you appreciate your couch more than not sitting on a couch for eight weeks.

Except maybe not sitting on a couch for sixteen weeks.. 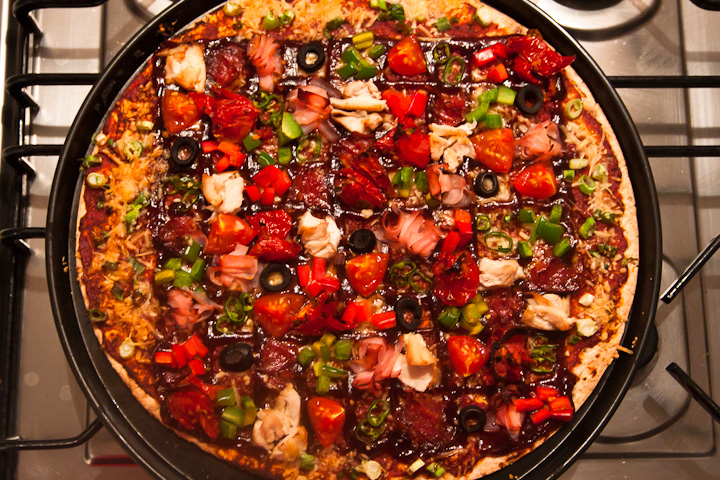 We made a Sudoku pizza. It was delicious to solve. 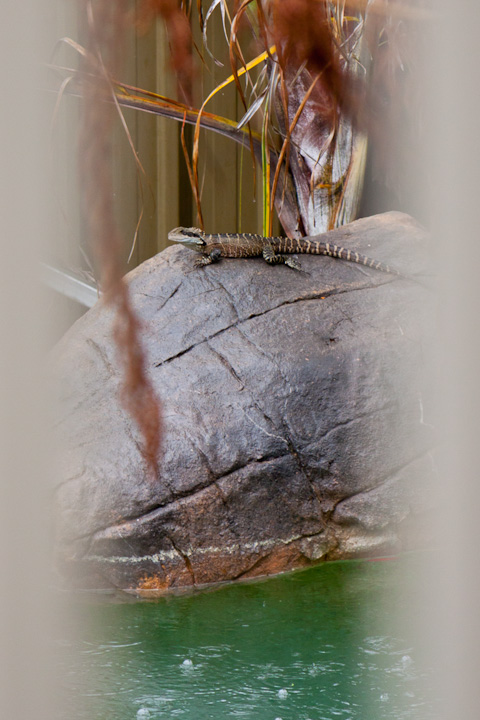 This lizard wasn't very good at being a lizard. I used my telephoto to shoot him hanging by the neighbour's pool in the rain. 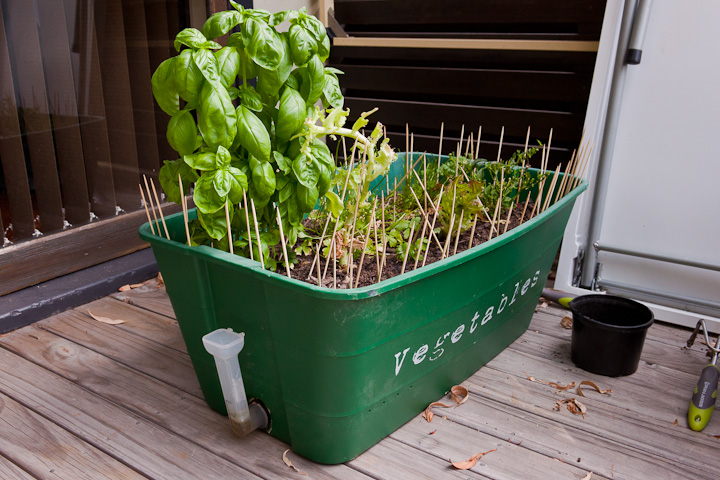 This is pretty much what our Vegetables Garden looked like this morning, except with lots of skewers in it. The night before it boasted a healthyish crop of lettuces, parsleys, chillies and basil. It turns out possums like to eat all of those things except basil. I already had put in a few skewers around the chilli, because I busted a Kookaburra getting into the fruits one day. He wasn't laughing much after that. The possum would have been pleased with himself though, he completely destroyed everything. 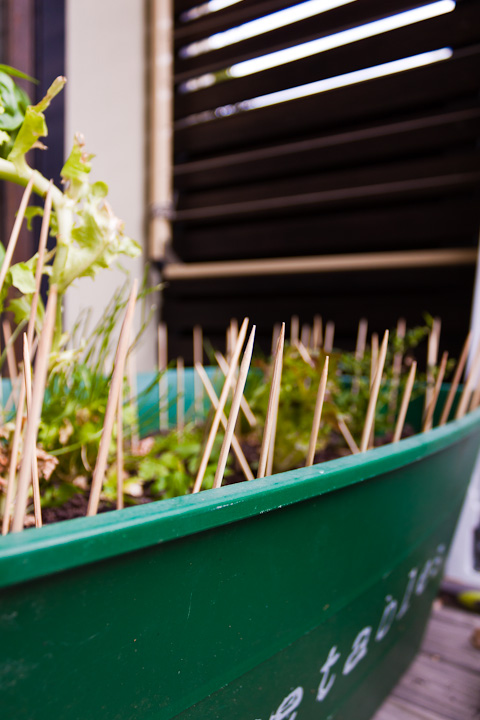 A menacing shot of the spikes. Before I went with skewers I searched the internet for a few possum repellent ideas in gardening forums. They all recommended spraying combinations of various spices and petrol around the garden and stressed humane methods. This made me hesitant to use spikes, but then I remembered all the plants in the world that have spikes and what does parsley have? Nothing. Welcome to the future, Parsley. 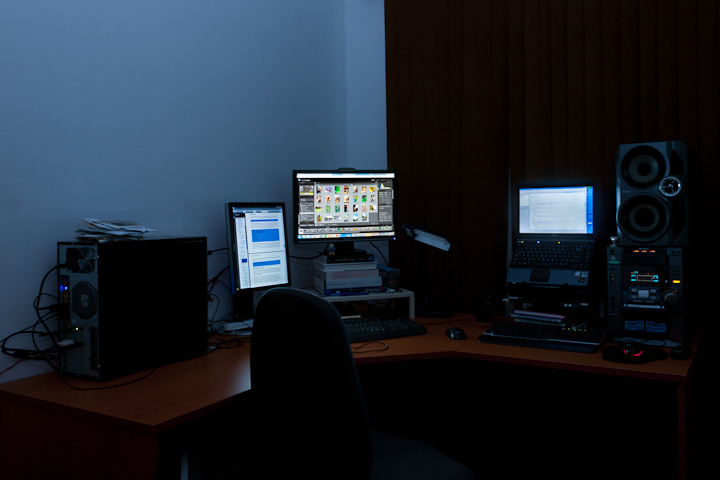 I also bought a new office desk last week, and despite gritting my teeth through a relatively simple flat pack shelf unit a week earlier, I was brazen enough to buy a 0 flat pack desk. It took me about six hours to put together. Me and flatpack furniture go together like Lindsay Lohan and driving - complete confidence right up to actually getting started, and then everything starts to go wrong. Nonetheless I was pretty happy when I'd finished malleting the thing together, a sentiment the lady downstairs probably shared.