I wish that the producers of Border Security would come to my suburb and record a new reality TV show called "Justify Why You Think This Should Be In Your Recycle Bin".

Sanitarium is off their Nut

Each recipe was written by an athlete or blogger, and honestly I'm cut that my banana, Weet Bix and Bundy breakfast smoothie didn't make it in.

How to Travel Through Time

I've discovered how to travel back in time, but it takes a fair bit of advanced planning. The secret is to create a mixtape of songs that are meaningful to you at a certain point of your life. Most of them will be recent releases, as new songs don't carry any existing associations with them. However, if you can find some tracks from the eighties or some other obscure indie act from years ago that you've never heard before, chuck them on there too. Try and consider the current season when picking the tracks.

Once your mixtape is ready and you've arranged the tracklist according to BPM, mood and title you should then proceed to play the mixtape regularly. Put it in your car, and on your iRiver, and listen to that mixtape as often as possible. Pay attention particularly to playing it on your trips to significant events like big parties or doctor's appointments, and on Friday nights and Sunday evenings.

The next step is the most important. Once the Winter, Spring, Summer or Autumn is over you should stop listening to the mixtape. Create another one and repeat the process. You need to not listen to the mixtape again for at least five to ten years.

Once the time has passed, dig the mixtape out again, or throw the playlist onto Youtube or Spotify and listen to the songs in order. There you have it, instant transportation to the season you made the mixtape. If the transportation doesn't feel fully immersive, consider writing journal entries back then as well. It might help. I truly think that journal entries are the greatest gift you can give to yourself from yourself, except for maybe when you pull out an unexpectedly long nose hair.

Okay, you might be a little frustrated right now that you didn't create a mixtape ten years ago and you can't relive the amazing drought of Winter 2006, but what's stopping you from creating a mixtape today? Nothing. You don't even need to restrict it to 80 minutes any more. There's something about the memory of music that scrolling finish to start through your phone's photo gallery can't replicate.

I was riding the train home last night after the Fringe Parade and overheard a conversation between a tipsy man and the ticket inspector. The inspector was issuing him a verbal warning for not validating the ticket on the train.

"Sorry. I'm from Sydney," the man said, confused. Pretty much the go to line for anyone on any form of public transport when these kind of things happen. "I validated when I went through the gates at the station?"

The ticket inspector proceeded to kindly explain that in Adelaide you need to validate your ticket twice, both when entering the station and when you're on the train. Then, as the ticket inspecting was pretty much done, he went on into a longer discussion with the man about the differences between Adelaide's public transport ticketing system and Sydney's. The main was a little bleary eyed, but he didn't have a smartphone that I could see, so he nodded along.

I couldn't help listening in too. The inspector seemed knowledgeable and he passionately explained about our zones and peak/inter-peak timings and how Adelaide had a smartcard system years before Sydney did. His speech to this guy was building up some real momentum.

"The other different thing about trains in Adelaide and Sydney," he was saying, before a woman passenger a few seats back stood up and yelled, "Hey," at the inspector.

Everyone turned to see what she would say. She asked the inspector, "Is your name Mathew? We went to Primary School together."

Ate about a kilogram of yogurt.
Got a discount haircut using a shop-a-docket.

I saw this Woolworths advertisement today while walking around the city at lunch time. 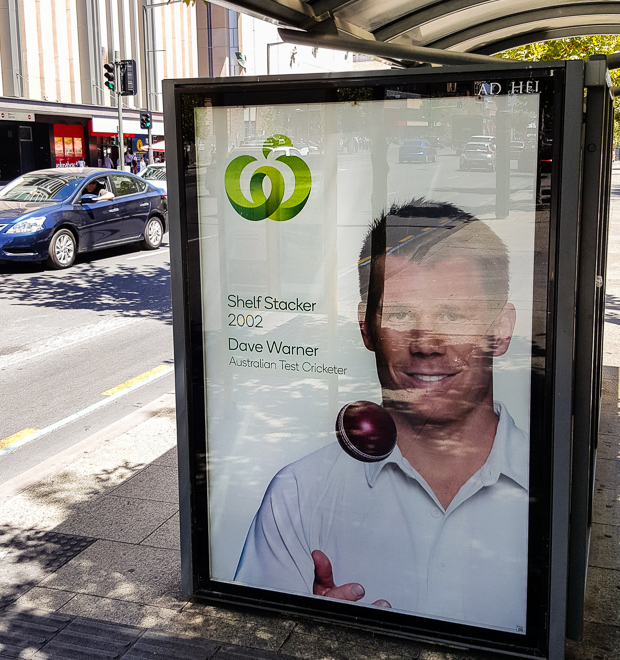 I immediately had a few problems with it.

1) Since when did they invent the job title "Shelf Stacker"?

It was called Nightfill, and portraying it as simply "stacking shelves" does such a huge disservice to the different skills and endeavours required to succeed as a night filler. It's so much more than just putting things on shelves. Loading flat-tops, spotting, and facing up are all fundamental aspects of Nightfill that I feel the Australian public has no real appreciation of.

Would you call digging through a shelf of perishables in the back dock freezer to find the right flavour of Greek Yogurt for a customer before the store closes "Stacking Shelves"?

What about crushing your boxes perfectly as you load your trolley in order to maximise the bale-press' effectiveness? Is that just "Stacking Shelves"?

Is managing to eat a whole packet of Wagon Wheels that were run over by a pallet jack in a single sitting without a manager noticing you "Stacking Shelves"?

2) That's not even my picture.

3) My name's not David Warner. 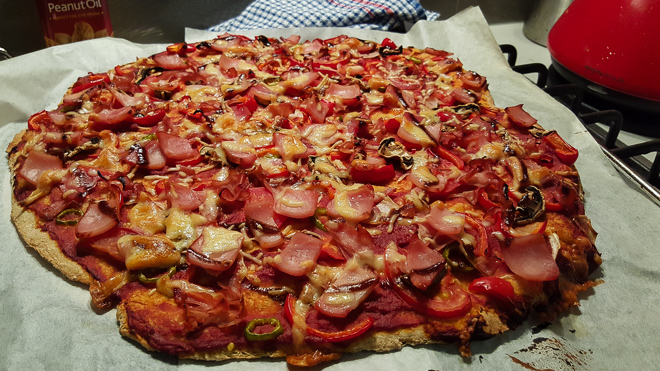 I was searching the internet today for a recipe for apple-cinnamon hot cross buns and I viewed enough cooking blogs to be reminded of the hatred I have for recipe posts that start with a gigantic boring story.

I mean, honestly, who cares if someone's garden was having a bumper crop of butternut pumpkins at the time of writing. Or if they had bought ten kilograms of frozen basa fillets because they were trying to reach a spending goal at a supermarket in order to earn bonus shopper points. The catalyst for someone else wanting to use the recipe will not likely be the same. Just get to the point!

Today I decided to fix the leaky shower head in the ensuite, which required me to replace a washer and to lube up a spindle. First I had to shut off the water, which required me to find exactly where the water shutoff valve was for my house. There was a redback spider on it, under a thick spider web holding a few clutches of redback spider eggs. I doused the whole spot with bug spray and returned with a stick to wipe everything up. The valve tap was so slick with bug spray after that I needed an allen key just to turn it.

Once I was done replacing the washer on the cold tap I turned the water back on. The shower head still dripped. I shut the water off again, disassembled and reassembled the tap, still it was leaky. I decided to replace the hot water tap washer as well. After that the dripping had stopped. Success! I had earned a beer, and I'd managed to handyman something without even needing to drive to Big Box Hardware.

Unfortunately it was barely after lunchtime and I couldn't start drinking yet. So, I made a coffee and sipped it on the toilet while playing Scramble with Friends.

Method
Mix ingredients into dough and knead for 5-10 minutes. Cover and leave somewhere out of the wind for an hour to rise. Maybe go for a walk on the beach while you wait.

After rising, punch down and roll out to make 2 pizzas bases. Pre-heat oven to 220 degrees Celcius. 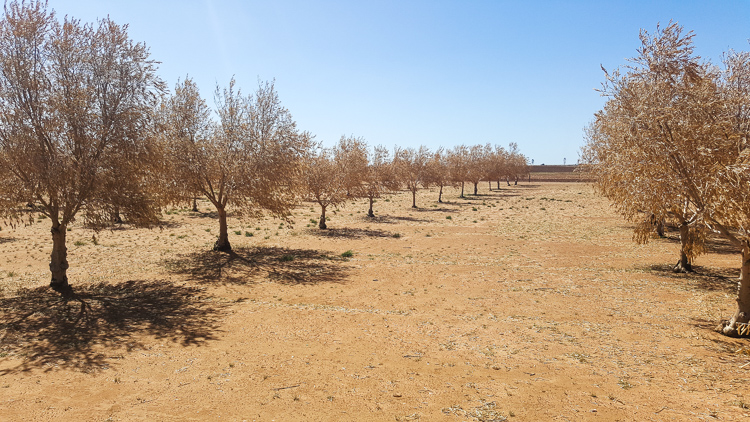 Yesterday we spent our Summer day driving up to the Barossa. We passed through some of the farmland that had been hit by the Pinery Bushfire late last year. The photo above is from an olive grove that was blowtorched by the passing front.

It was humbling to see the impact the fire had wrecked on the farm and the countryside in general.

However, after taking a closer look, on at least some of the trees there were green shoots poking through. The trees were persevering, not giving up. It was motivating. 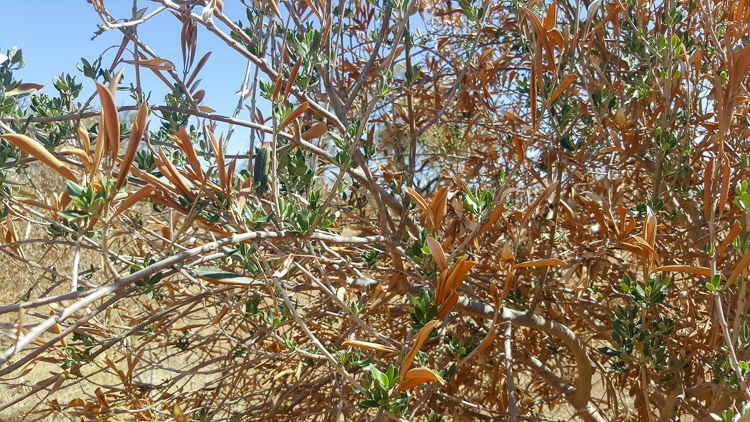 Then I drove home and cooked some BBQ. 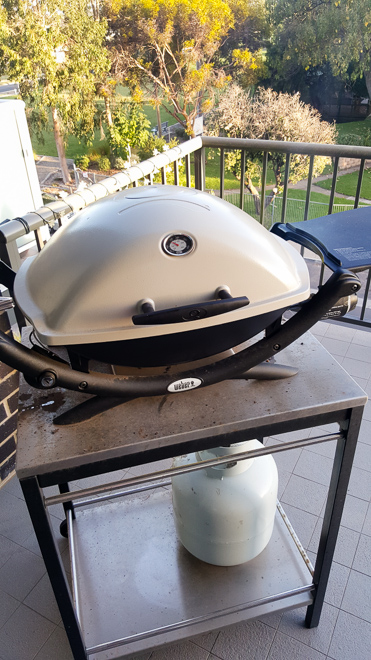