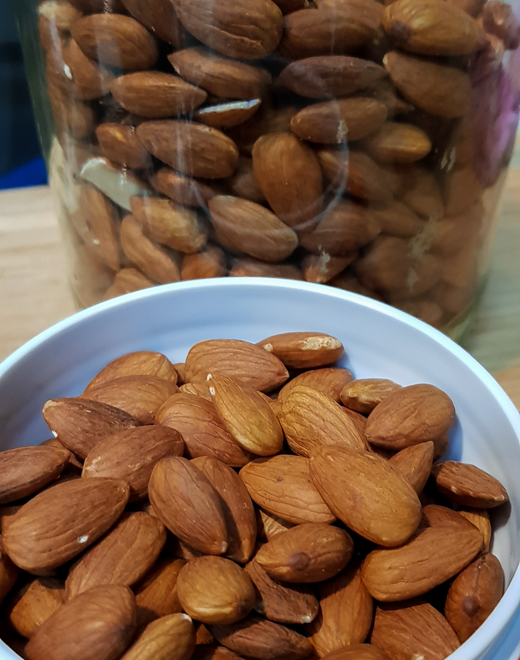 When I was a young man, still learning the difference between a magazine article and an advertisement, I discovered that almonds were a "superfood". These hard, brown lumps are rich in monounsaturated fats and contain high amounts of vitamin E and the amino acid arginine. Almonds are also a source of potassium, magnesium and zinc.

Greatly interested in improving my health, I bought a kilogram packet of raw almonds and - given the packaging was about the same size as a packet of potato crisps - I began consuming them in similarly sized handfuls. What I didn’t realise was that - along with protein, healthy fats and antioxidants - a kilogram of almonds contains nearly 6,000 calories.

In the following years I adjusted my intake of almonds down to a small handful - 30-50g a day. Eating them became a habit, and most weeks since 2006 I would say I've eaten almonds at least five times a week. In that same time period I have maintained low body fat and a healthy physique, which confused me in some ways because I also drank a lot of beer, ate whole family sized pizzas on weekends, considered a bowl of Weet Bix, yogurt and banana as a "snack", and, you know, other lifestyle choices. I always suspected that my consumption of almonds was doing something inside my body to keep me healthy.

There came a point this year where I decided I needed to gain some weight. I calculated my base metabolism, nutritional needs and set a calorie goal that made me nervous. In order to achieve those lofty numbers I made several changes, including incrementing my almond consumption to 50-60g a day. But as the weeks went on I did not see any increase in body mass. And it was at that point I came across an article in The American Journal of Clinical Nutrition which essentially said that a large percentage of the energy in almonds (and in fact most nuts) was not absorbed by the body.

Understand: A calorie is "the amount of heat energy needed to raise the temperature of one gram of water by one degree Celsius". Food labeling uses the Atwater system.

The above study, if you decided not to read it, proved that almond energy didn’t get absorbed because when they burned the study’s almond-eating participants' poop there was more fire (I’m a journaller, not a scientist, so don't attribute me on any of this).
The cellular structure of an almond is intense, compared to a slice of apple, a cup of milk, or a puff of donut. The human digestive system has to do so much work to break the almonds down into absorbable molecules that most of them don’t even make it into the body before the nut reaches the end of the ride. Roasting, slivering, or turning them into nut-butter obviously reduces this cellular intensity.

What’s more, the study found that eating raw almonds along with other foods contributed to a reduced caloric intake overall. That is, the more almonds you eat in your diet, the less calories you take in from other foods too.

For participants the discrepancy in almond calories absorbed compared to the Atwater system measure was a reduction by 33% up to 66%! Calories from other foods were reduced by on average 5%.

However, 66% less calories is not the same as calorie negative. That’s true. I can explain further...

The concept of calorie negative foods typically intends to describe foods that are so low in energy that the body uses more energy chewing and digesting the food than it gets in energy from the food. For example: celery. A kilogram of celery contains only 140 calories. It’s high in fibre, and takes a decent amount of munching. Unfortunately for the calorie negative argument, it doesn’t take 140 calories of energy to eat through a kilogram of celery. The body burns different amounts of energy depending on the type of food it’s digesting. For proteins it’s as high as 30% of the total energy content. For fats it’s and carbs it’s closer to none.
Celery is high in water, and mostly carbs, so unlike a raw almond the cells don’t put up much resistance on the way down. The same applies to other "calorie negative" foods like watermelon, strawberries and cucumbers. They’re healthy, but even if you include the effort to pick them up, chop them, lift them to your mouth and carry the bowl back to the dishwasher you’re still not going to burn more energy than you consume.

An almond is not high in water or carbs. It does not break down easily inside your guts. I experienced a stark demonstration of this fact on my return to the office recently after a six month shutdown. It seemed that at some point prior to Coronavirus breaching Australian borders I’d dropped one of my morning almonds behind my desk. Despite the office being "deep cleaned regularly" as part of a "safe return to work program" the almond on the floor had never been vacuumed up and, as you can see, a newly formed city-state of bacteria barely made a dent in it over half a year. Imagine how little your digestive system is going to achieve over just 30 hours. 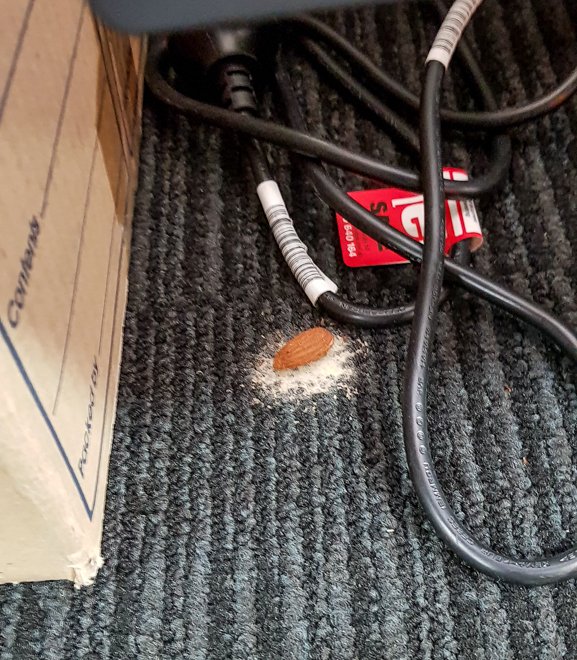 A roasted or slivered almond, or a gram of nut butter on the carpet might have resulted in a different picture. And now you know my secret to making almonds a calorie negative treat - swallow them whole.

As a man with fifteen pages of journal entries tagged “breakfast", I found this concept particularly confronting. 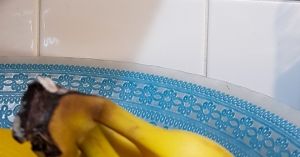 After two weeks, and dozens of midges...