It was a sunny, premature-spring day and I went for a brisk walk at lunchtime with a pair of child's crutches.

The reason I had a pair of children's crutches is that I bought them on Monday by accident trying to buy adult-sized crutches. On Sunday I had gone to the chemist to ask if they hired crutches, and the chemist had said no, but she showed me a pair I could buy.

I returned the next day to buy them. I did notice they seemed a bit short, but everything looks short to me and I figured they'd just extend out a bit. There was also a big, athletic looking man on the packaging.

After I got them home and Vanessa opened them it was clear they were children's crutches. I rang the chemist straight away to explain and confirm if I could get a refund. However I was told the manager would be needed to confirm this as the product was opened, and I left my phone number. They never called back.

So before my lunchtime walk I wrapped the crutches up in cling wrap, positioned the label nicely, and set off for the chemist. While I was willing to accept some blame for the situation, I strongly believed I could justify why I should be given a refund. Primarily, because the chemist had shown me the crutches on Sunday and not mentioned that they were children's crutches. I had some secondary justifications, such as that the packaging had already been broken (albeit not removed completely) before purchase; that a matter of torn packaging was something that the chemist could rectify with the supplier if it came to it; and the resale value of the crutches was not diminished considering they weren't used and the type of product they were (as well as the quality of the cling wrap job).

Yet as the shining sun warmed my exposed forearms I felt my enteric nervous system firing as it encouraged my stomach to digest faster, and I realised I was nervous. After all, I was heading for a conflict and even I knew I was not completely in the right. There could be scenes. I might never get my $52.95 back.

I glanced up at the top of a tree which contrasted against the blue sky and the bright, yellow chemist branding, and I contextualised the significance of this moment in the overall universe (which may or may not be a simulation). This confrontation meant nothing to anyone other than me and the pharmacist manager. It was a zero sum game that I'd already paid to play, and now had a chance to win. I realised, I wasn't anxious. I was excited! How many opportunities in life - outside your imagination - do you have for actual, robust debate with real value consequences? The internet is meaningless. Compilers and interpreters are frustratingly infallible. Clients are always right. But this moment, now, was a chance for my brain to process all the inputs it could, spin it in my birthday-month mousse-cake powered sapient mind, and win or lose. Worst case, I end up with a pair of children's crutches. (And possibly end up on social media tagged as a "Karen".)

I had a friend in primary school whose mum is called Karen. She was nice, and sometimes I used to see her driving out of her driveway on my way to the bus in the late 90's and I always waved and she waved back. I hope she is not aware of the Karen meme.

Anyway, I burst into the chemist with my glad-wrapped crutches. I scanned the QR code. I walked to the counter and said, "I need a refund on these crutches, because they are children's crutches!"

She took the crutches and scanned my credit card to trigger a refund.

Never has total victory also felt like such a loss.

Next Entry: The Cycle 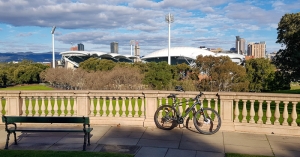 Previous Entry: One (Trimester) Down

My recovery from labral tear repair and biceps tendon reattachment has progressed okay one quarter of a planetary orbit post-op. Although one quarter of an orbit seems appropriate considering my current level of external rotation.