About 198 days ago I cracked the seal on my bulk container of 1500mg Fish Oil capsules and I recall thinking to myself that I was probably going to swallow the last of them on my birthday.

You might think it takes only rudimentary intelligence to count the number of days between two dates and divide by two, but that's not the logic I was using. I didn't know how many days there were exactly. I was calculating based on my instinct for how often I would be likely to skip my daily fish oil, and how approximately old I was, which at the time felt like exactly thirty-six years and 163 days.

This is the kind of mental acuity you can expect when you regularly consume 3000mg of fish oil 99% of the days.

Alas, I wasn't to know that I would miss seven days of autumnal fish oil as a prerequisite for my shoulder operation, and then another seven days when it was delayed a fortnight. But on the plus side I learnt that fish oil must be something other than a placebo otherwise why would the hospital ban me from taking it in the lead up to surgery?

Unfortunately my shoulder operation would also deprive me of my routine at the opposite end of the day - the mermaid stretch. It is, by far, the most effective stretch I have found to open the hips, unlock the lower back and release all tension from my hamstring tendons all the way up to my obliques. Unfortunately it requires a decent amount of shoulder resistance, and my orthopaedic surgeon may actually be Ursula, the sea witch, because since I woke up post-operation I couldn't be a mermaid anymore.

When I was a wee babe watching The Little Mermaid in a cinema for the first time, the scene with Ursula scared me so badly I cried and tried to hide in the aisles. This is an event I have no memory of, but which my Mum likes to remind me of from time to time.
Around 34 kilograms of fish oil have passed since that day, but perhaps this was what has motivated me these past months as I mobilised and braced and lifted tiny weights. My goal: to overcome the curse of Ursula. And this week, finally, I have been able to do my mermaid stretch and be under the C again. 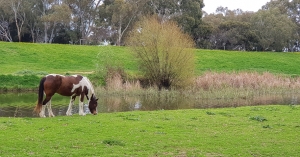 Next Entry: The Saddle

If you haven’t reached 37 years old yet and you want to know what it feels like, I will describe it. Essentially I am a 21 year old who has reached a certain level of comprehension for so many things in the world.